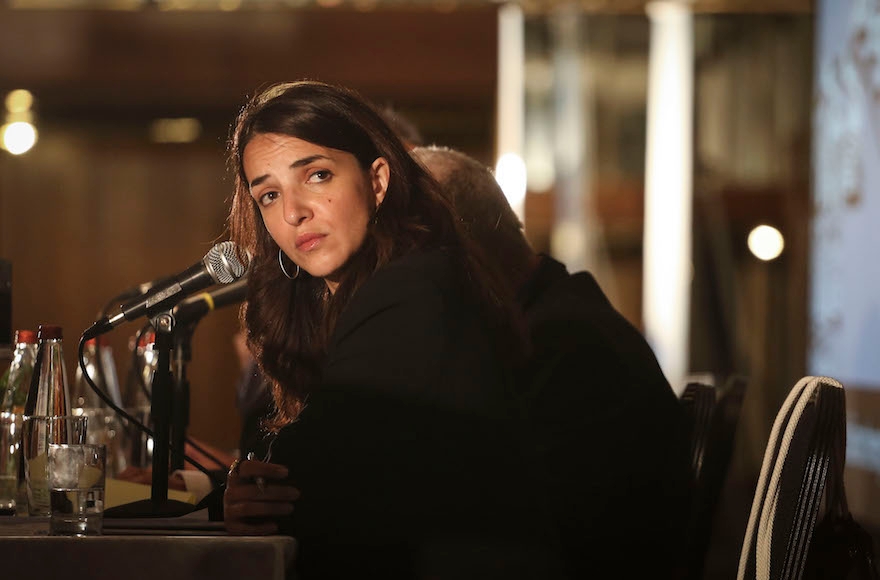 Arab-Israeli news anchor Lucy Aharish isn’t afraid to take on both sides of her fraught identity. She has spoken out against the racism that Palestinians face in Israeli society as well as against Palestinian violence.

Aharish, 34, was interviewed on Tuesday on Israel’s Channel 2 about the wave of Palestinian terrorism that has Israel on edge. In a segment of the interview shared over 22,000 times on Facebook in less than 24 hours, Aharish slammed Palestinians for using religion as an excuse to attack Jews, and their leaders for inciting the violence.

“Some of the Arab leaders are keeping a horrific and deafening silence,” she said, according to a translation of the interview by The Israel Project. “They are not trying to calm the situation, not trying to act towards mutual understanding and accepting the other.”

Aharish didn’t shy away from the controversy surrounding the Temple Mount, known as the Noble Sanctuary to Muslims. Some say attempts by Jews to pray at the holy site provoked the Palestinian attacks, and Israeli crackdown, of recent weeks. Aharish said Israeli policy on the Temple Mount has not changed, but that even if it had there is no excuse to resort to violence.

“Even if the status quo on the Temple Mount has been broken, does that allow someone to go and murder someone else because of a sacred place?” she said. “Why, because of God? What God are they speaking of? One that allows for children to go out and murder innocent people?

“What woman puts a hijab on and prays to God, takes a knife out and tries to stab innocent people?” she asked.

Aharish also called Arab leaders in Israel “weak” and suggested their purported outrage about the Temple Mount is insincere.

She ended her rant by criticizing leaders for inciting young Arabs to violence.

“You are inciting thousands of young people to go to the streets. You are destroying their future with your own hands,” she said.

Aharish hosts news shows for Israel’s Channel 2 and i24 News stations. She was the first Arab Muslim news anchor on Arab Muslim television and remains one of the few, according to Haaretz.

Earlier this year, she was chosen to light a torch at Israel’s official Independence Day ceremony. Some Israelis, on the political right, said she was not sufficiently local to the state; while others, on the left, accused her of “playing the obedient Arab, salving Jewish consciences,” Haaretz said.

When Aharish was 6 years old, she was injured when Palestinian attackers lobbed a Molotov cocktail at the car she was riding in with her parents in the Gaza Strip.