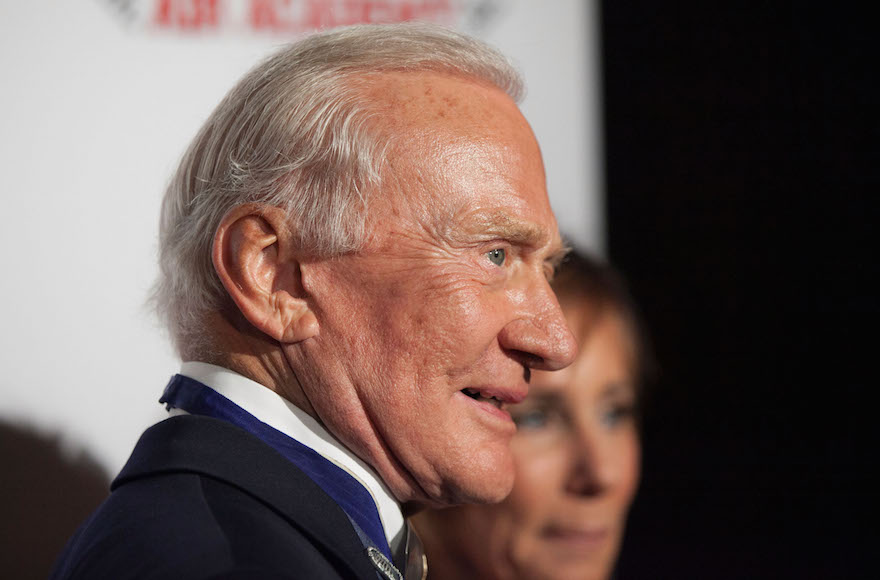 JERUSALEM (JTA) — Israelis seeking an escape from this week’s daily terror attacks couldn’t fly to the moon, but they had a chance to hear from someone who did — Buzz Aldrin.

In Israel’s terror-riven capital, the Israel Space Agency — the country’s version of NASA — is hosting this year’s International Astronautical Conference, the premier confab for all things space. An exhibition hall shows off a range of gadgets and robotics, and talks fill the schedule this week with titles like “The State of Space Situational Awareness, Conjunction Warning and Collision.”

Those of us not qualified to consult on “The Martian” film got the common thrill of seeing Aldrin, the second man to walk on the moon after Neil Armstrong.

Of course, Aldrin said, he should have been the first. So why did Armstrong, the mission commander, beat him?

“He was closer to the door,” Aldrin said.

Standing next to two empty spacesuits and addressing a packed room, Aldrin, 85, was rambling and jovial, recounting his personal history and going into detail about technical issues in space, which some people in the room must have understood.

A West Point graduate, Aldrin joined the U.S. Air Force and fought in the Korean War before becoming an astronaut in 1963 – six years before he walked on the moon. Aldrin remained involved in space exploration in later years, devising plans for a Mars mission.

“For a little towhead boy growing up in Jersey to exhibit mathematical skill, to use his education and endurance to walk on the moon — wow!” Aldrin said.

The retired astronaut said the United States should reclaim the trailblazing role it once took in space exploration. He also pushed his plan for a Mars mission, calling for humans to orbit the planet and use robotics to explore it rather than just landing and coming back.

“I am so dedicated in many different ways to having the U.S. regain the leading program that we had,” Aldrin said. “It’s sort of frittered away, but I believe it can be rejuvenated for the benefit of all nations.”

One country whose space stock is rising is Israel, which is hosting the conference as it moves to expand its presence in the cosmos. Founded just three decades ago, Israel’s space program focuses on launching communications and reconnaissance satellites. Its first satellite launch occurred in 1988.

The country’s best-known encounter came in 2003, when fighter pilot Ilan Ramon became the first Israeli astronaut. But it turned tragic when his space shuttle, Columbia, exploded upon reentry, killing the seven-member crew.

This year has seen an Israeli space renaissance. SpaceIL, a team of three engineers working to land a spacecraft on the moon, is a top contender to win Google’s $20 million Lunar XPrize, which will be awarded to the first privately funded group to not only land a craft on the moon but have it travel on the lunar surface.

Last week, SpaceIL secured a contract to launch its dishwasher-sized craft toward the moon in late 2017 — the first team in the world to do so.

On Oct. 6, Facebook announced plans to launch an Israeli-made satellite, the AMOS-6, to bring Internet access to large swaths of sub-Saharan Africa.

And on Tuesday, NASA and the Israel Space Agency signed a cooperation agreement that enables joint missions, research, space exploration and other projects.

“There are amazing space capabilities in Israel,” said SpaceIL co-founder Kfir Damari. “Israel has a huge potential. Most of the [Israeli] space business was in security, and we’re the first step in civil space flight. I believe it can be something really significant for Israel.”