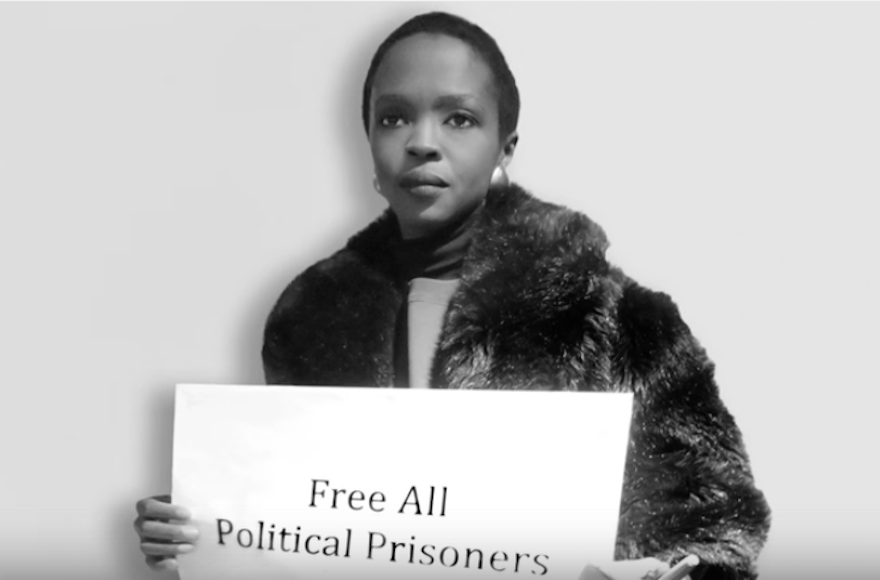 (JTA) — Musician Lauryn Hill and actor Danny Glover appear in a video equating the situation of Palestinians under Israeli rule with that of blacks in the United States — and protesting both.

The short video, entitled “When I See Them I See Us” and uploaded to YouTube on Wednesday, also features Angela Davis, Cornel West, Alice Walker, Omar Barghouti and other prominent black and Palestinian academics and activists.

At the beginning of the video, two narrators intone: “Every 28 hours, a black life is stolen by police or vigilantes in the U.S. Every two hours, a Palestinian child was killed in Israel’s attack on Gaza last summer” — a reference to the 2014 Israeli offensive aimed at stopping missile fire and tunneling by militants from the territory.

The video participants hold signs with various statements that refer to supposed oppression of African-American and Palestinian communities, such as “Money for schools, not prisons,” “We are not statistics” and “Racism is systemic.”

Various narrators list casualties of racial and political violence, such as Eric Garner and Mohammed Abu Khdeir, and make controversial statements, such as “They sterilize us without our knowledge. Mark our children as criminal. We say not to all forms of oppression, in U.S. cities or on Palestine’s streets.”

The slogan “When I see them, I see us,” is repeated throughout the video.

Hill, who is seen holding a sign that says “Free All Political Prisoners,” cancelled a performance in Tel Aviv on May 7 after being pressured by the Boycott, Divestment and Sanctions movement, which seeks to economically damage Israel. Hill claimed on Facebook that she cancelled the show because she could not set up an additional performance in the West Bank.

Noura Erakat, a lawyer and assistant professor at George Mason University in Fairfax, Virginia, oversaw the video’s production. She told Al Jazeera that she was inspired to create something after seeing the aftermath of the shooting of unarmed African-American teenager Michael Brown in Ferguson, which coincided with Israel’s Gaza war in the summer of 2014.

Brown’s death sparked months of violent protests and reignited national debate about racism in the United States. The 2014 Gaza war, which Israel began in retaliation to rocket fire from the Gaza Strip and the murder of three Israeli teenagers, left more than 2,000 Gazans and more than 70 Israelis dead.

“Here were two groups of people dealing with completely different historical trajectories, but both which resulted in a process of dehumanization that criminalized them and that subject their bodies as expendable,” Erakat told Al Jazeera.