7 of the funniest reactions to Netanyahu’s Hitler-mufti theory 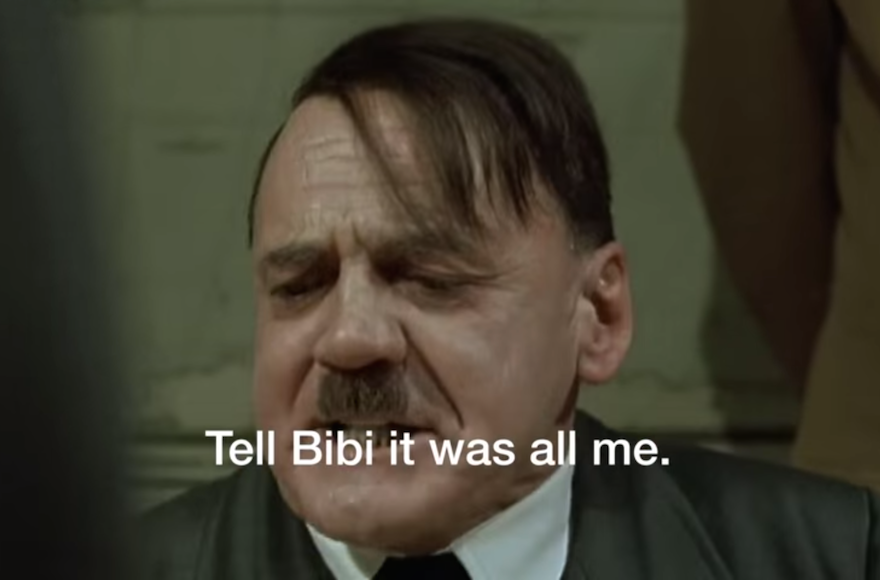 Hitler ranting in a parodied scene from "Downfall." (YouTube)
Advertisement

Israeli Prime Minister Benjamin Netanyahu told the World Zionist Congress on Tuesday that the mufti of Jerusalem gave Adolf Hitler the idea for the Holocaust, prompting swift and widespread condemnation from serious people.

German Chancellor Angela Merkel was quick to put the Nazi leader back on the hook, saying “Germany abides by its responsibility for the Holocaust.” And Israeli historians and politicians publicly denounced Netanyahu’s claim, comparing it to the rhetoric of conspiracy theorists.

“With this, Netanyahu joins a long line of people that we would call Holocaust deniers,” Moshe Zimmerman, a professor of German history at Hebrew University, told the New York Times.

At the same time, the wheels of Internet mockery got rolling, providing a lighter take on the controversy. Here are seven of the best jabs.

Everyone knows the iconic soup Nazi character from the sitcom “Seinfeld.” If the mufti really had the impact on history that Netanyahu suggested, would we be using his title interchangeably with “Nazi”?

A oft-parodied scene from the German film “Downfall” — depicting an angry Hitler ranting about the imminent demise of the Third Reich — has already garnered millions of views. In Rabbi Eliyahu Fink’s version, Hitler is very jealous of the mufti.

3. The Nazi leader as an impressionable guy

According to this guy, Hitler just got a little carried away with a suggestion from a friend.

We finally know who really broke up The Beatles.

5. It was the mufti all along

Will the real Adolf Hitler please stand up?

If Bart Simpson writes something on the chalkboard enough times, it almost seems true.

I think the #Mufti told #Biden not to run. #MuftiMadeMeDoIt

Someone had to connect the Netanyahu controversy with Joe Biden’s announcement on Wednesday that he will not seek the Democratic presidential nomination.