For Jewish UNICEF official, it’s all about the children 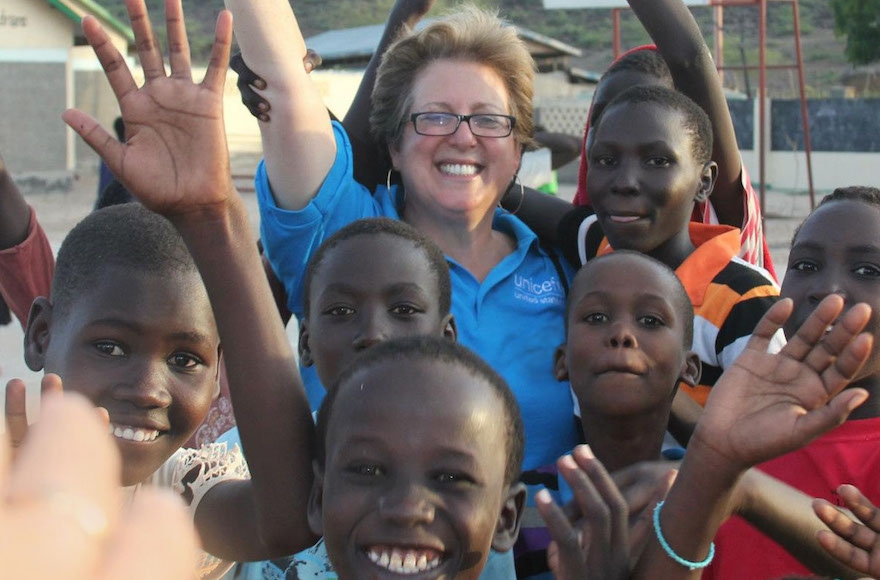 WASHINGTON (Washington Jewish Week via JTA) — Whether Caryl Stern, the president and CEO of the U.S. Fund for UNICEF, is touring a war-torn country, a natural disaster or a refugee camp, she always sees children playing.

They may be kicking a ball made of paper or hugging a doll made of rags or straw, but they are happily playing.

The kids’ ability to smile and play through the most extreme of circumstances is what inspires her every day. Since taking the helm of the organization in 2007, Stern has guided UNICEF’s responses to disasters as varied as the 2010 earthquake in Haiti and the Ebola crisis in west Africa.

She has also faced criticism that UNICEF is hostile to Israel. Many years ago, one of the camps it sponsored in Beirut to keep children off the street was subsequently renamed for a suicide bomber. Hearing this, the Reform movement of Judaism in the United States ended its sponsorship of the program. Although the camp’s renaming was unofficial, “the damage had been done,” Stern said, and for years Jewish children stopped carrying the bright orange UNICEF collection boxes during Halloween.

“I stand very proudly as a Jewish woman at the helm of this organization,” said Stern, 57. “Right now is our moment. This is our opportunity to stand up for everything we believe.”

Stern, who previously spent 18 years at the Anti-Defamation League and was a 2014 Jewish Women International Woman to Watch, said that her “firm belief in tikkun olam [repair of the world] and not putting the sins of our fathers on children” make it necessary to be involved.

Her current focus is the scores of young people fleeing their countries, sometimes without adult supervision.

Some 30 million children — 13 million of them from the Middle East and North Africa — need a permanent place to live and a school to attend regularly, she said.

Stern is aware that these children have “scars that are going to be with them for a long time,” including physical and intellectual problems due to malnourishment and disease.

But their resiliency motivates her.

“If you turn on music, they will dance,” she said, boasting that she’s  “played ‘Head, Shoulders, Knees and Toes’ in just about every language.”

READ: Op-Ed: What I saw on the migrants’ road to Budapest

So many of the problems facing the children face “are fixable, curable,” she said. With proper medicine, vaccines and clean water — and with an end to war — many of their woes would disappear. Her goal is “zero hunger, zero poverty, zero disease,” which she described in her 2013 book, “I Believe in Zero.”

Stern was in Washington last week to attend Fortune magazine’s Most Powerful Women event and launch a new fundraising program, UNICEF Kid Power. A $40 bracelet encourages children to be more active while teaching them about other cultures in a game-like program that awards points for exercising.

The bracelet “lights up, and it buzzes,” she said. “Kids love it.” The money raised will be used to deliver food to malnourished children around the world.

Some might assume Stern’s position is an office job, but she said she needs to “bear witness” — in her eight years at UNICEF, she has traveled to 32 countries. Stern said that having grown up in a family steeped in Holocaust memories, she understands the importance of retelling stories from firsthand knowledge.

Stern’s mother was 6, and her uncle 4, in 1939 when their mother, Stern’s grandmother, kissed them goodbye and sent them from Vienna to America with a woman they didn’t know. They ended up in an orphanage on New York City’s Lower East Side.

That same year, her grandfather boarded the St. Louis, the German cruise liner filled with Jewish passengers heading to Cuba. The ship was forced to return to Europe when no country would open its arms to the Jewish passengers.

Growing up, “the two stories we constantly heard were how nobody gave a damn” to help the Jews, according to her grandfather, and “how nice people were to take my mother in and care for her.”

Stern, the mother of three sons, knew she wasn’t going to be the one to turn her back on children who, through no fault of their own, were suffering.

People sometimes hear that UNICEF has programs in areas hostile to Israel — including, most recently, the Gaza Strip — and they condemn the organization, Stern said. But UNICEF’s mandate allows it to operate only in underdeveloped countries, and Israel is not one, she explained.

There are exceptions, she added. It has set up a recreation center for children in Sderot, who grow up under the constant threat of bombing.

“UNICEF has absolutely no politics,” she said.  “We don’t deal with adults. … We only want to give the children what they need.”