For love of the game, Justine Siegal has risen to be MLB’s first woman coach 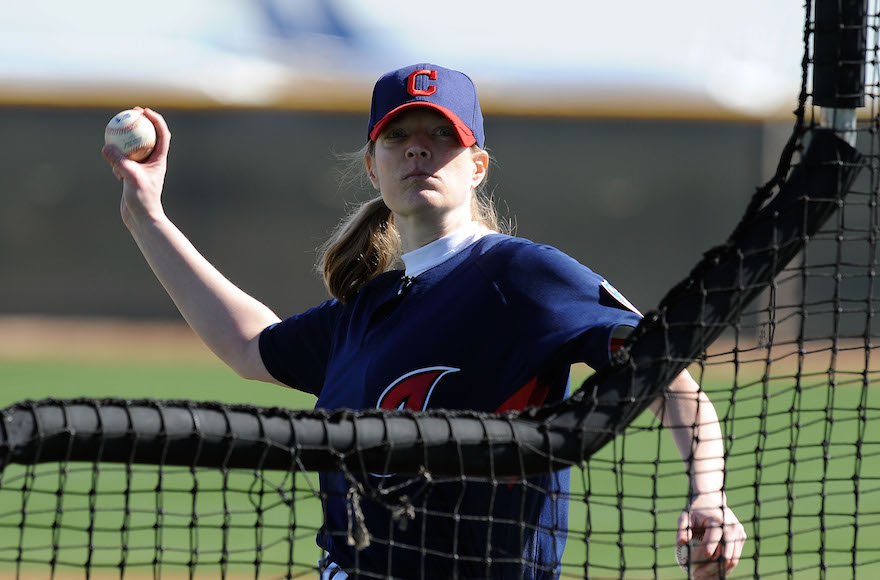 Justine Siegal prior to coaching for the Oakland Athletics had already made baseball history, throwing batting practice for the Cleveland Indians in 2011. (Norm Hall/Getty Images)
Advertisement

(JTA) – For Justine Siegal, attending Opening Day games of the Cleveland Indians with her grandfather led to a lifelong passion for baseball – and dreams of one day playing for the Tribe.

“Heaven,” she called the outings, where she sat in the best seats in the house — the first row behind the home dugout.

Along with the passion, Siegal developed an acute knowledge of the national pastime, so much so that she went on to make a career in baseball.

This month, the 40-year-old Siegal, who lives in Southern California, got even closer to the action than those box seats: She worked as a coach for the Oakland Athletics’ Instructional League team in Arizona.

In doing so, Siegal became the first female to serve as a coach for a Major League Baseball club and joined the ever-growing list of women blazing new paths in the game.

“I was only able to stand in an A’s uniform because of the women who came before me,” she told JTA. “It’s humbling and great to be part of history, but my focus is to build for the future.”

Siegal follows in a long line of women intent on making baseball their careers, said Leslie Heaphy, a Kent State University professor who chairs the Society for American Baseball Research’s Women in Baseball Committee. Those predecessors – primarily players and umpires – encountered a glass ceiling in men’s leagues that may be cracking now, with reports of MLB executive Kim Ng again being considered for general manager positions.

Teams in the NFL and NBA have already hired female assistant coaches.

“Maybe what Justine is doing will further open that door. I certainly hope so,” Heaphy said. “[Her] being invited to coach in Major League Baseball is a huge step.”

She added: “With her having this very visible role, and the attention being paid to it, people will say, ‘Oh, wow, that’s possible.’”

Heaphy has spoken with Siegal about some of that history. The latter is intent on building on earlier women’s efforts.

“I would never limit the possibilities,” Siegal said.

Siegal already was a baseball pioneer as the first female to pitch batting practice to major leaguers, first with the Indians in 2011 and later for five other teams, including the Athletics. She had been the first woman to coach for a men’s professional team, with the independent Brockton (Massachusetts) Rox in 2009. And from 2008 to 2011, she was a coach for Springfield College, from where she earned a doctorate in sports psychology.

In 2010, she founded Baseball for All, which works to increase opportunities for girls and young women to play baseball. Siegal said the organization has “inspired the creation of girls’ teams and leagues around the country, with others in the works.”

Siegal started playing baseball at age 5 and went on to play in male leagues. Her first job was in the sport: working at a batting cage as a high school senior. Later, to win the batting practice gigs with major league teams, she emailed general managers and attended the Winter Meetings to approach managers in person.

At the Instructional League, she employed some sports psychology techniques to help the team’s youngest and most raw of prospects. Siegal mentioned one of her charges there being 17, the same age as her daughter, Jasmine, who tagged along one weekend.

Using what she termed a “sly” approach, Siegal would sit next to a player and allow him to initiate a conversation about any difficulties he was experiencing. Eventually the discussion would lead to possible solutions and hopefully to the player reaching a conclusion on his own.

“I want them to come up with the idea and make the connection, [so] it’s something they own,” she explained. “It builds confidence. When I coach girls and women, respect is there right away. With men, it’s ‘Who is she, and does she know what she’s doing?’

In Arizona, Siegal said she sensed admiration from some players. One told her it was “cool” that she was expanding the reach of baseball. Others expressed hope that she’d be back with the Athletics in spring training.

“They knew how hard I fought to continue in baseball,” she said. “And they understand hard work and sacrifice.”

“She can do a little bit of everything, and helped out in a variety of roles – from on-field instruction to throwing batting practice,” said Feinstein, who like Siegal is Jewish. “She has also been an asset in our off-field classroom instruction,” he said, which included leading “numerous discussion groups on the mental side of the game.”

As to the past, going to all those Opening Days with her grandfather, Alvin Siegal, and other games with her father, Mike?

“I got to watch Nolan Ryan, Roger Clemens, Reggie Jackson. I just dreamt of playing for the Cleveland Indians,” Siegal said. “My love for the game came from my family’s enthusiasm for baseball.”

Siegal’s family history also includes strong Jewish communal ties. Her grandfather and his wife endowed the Cleveland College of Judaic Studies, which is now affiliated with Case Western Reserve University and is called the Laura & Alvin Siegal Lifelong Learning Program. For many years, Alvin Siegal led the fundraising for Israel Bonds in Cleveland.

Alvin Siegal, now 92, is most responsible for the family’s connection to baseball. He began attending games when he was 8 with free tickets distributed at school. The trolley delivered him to League Park, then the Indians’ home.

Little could he have known that his granddaughter would be pitching to and coaching with players on the Indians and other teams. A few years back, he saw her throw batting practice for the St. Louis Cardinals during spring training in Florida.

“I think she’s the most wonderful young lady. She’s just a hard worker,” Alvin Siegal said. “I think she knows more about baseball than some major league managers.”