At Rabin rally, calls to pursue peace and defend democracy 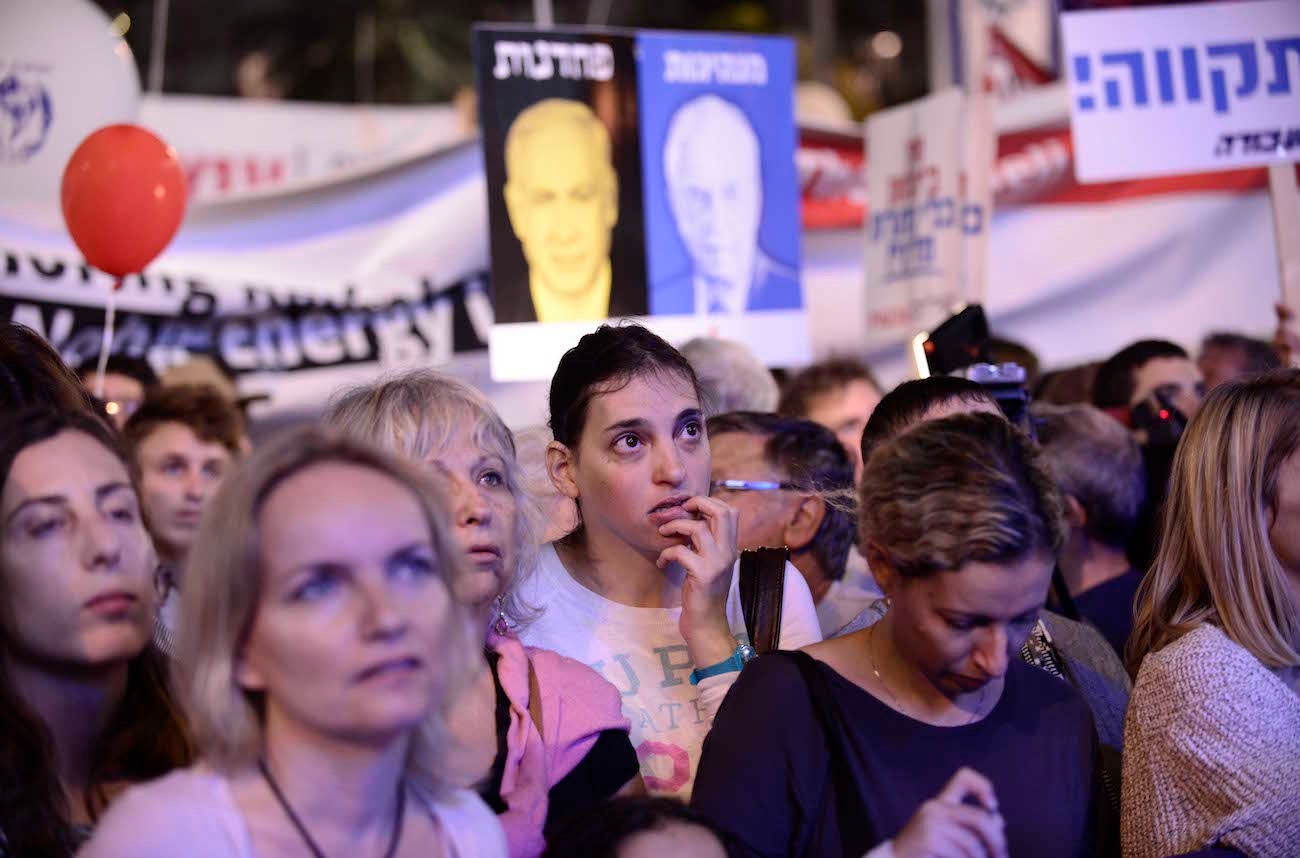 TEL AVIV (JTA) — Some 100,000 people joined together in central Tel Aviv on Saturday to pay tribute to slain Prime Minister Yitzhak Rabin, but they were divided over what exactly they were rallying for.

The demonstration, which marked the 20th anniversary of Rabin’s assassination by a Jewish extremist incensed by his government’s efforts to reach a peace accord with the Palestinians, was called “Remembering the murder, fighting for democracy” — a nod to the slaying’s universal lesson of respecting the rule of law and the country’s elected leaders, no matter their politics.

But some of the event’s speakers were interested in a different cause. The top-billed speaker, former U.S. President Bill Clinton, devoted much of his address to praising Rabin’s dedication to the peace process, and he concluded with a call to finish Rabin’s work.

President Barack Obama struck the same chord in a video address, where he lauded Rabin for relentlessly pursuing peace. The Obama speech sounded like a thinly veiled jab at Prime Minister Benjamin Netanyahu, who recently told lawmakers that Israel would not withdraw from territory in the foreseeable future and would “live forever by the sword.”

“Yitzhak Rabin understood the dangers Israel faces, but he also said the Palestinians are not to be ruled over forever by force,” Obama said. “Like a true statesman, he was willing to exhaust every opening, every possibility for peace. In these difficult days, his life, his dream, can inspire us.” 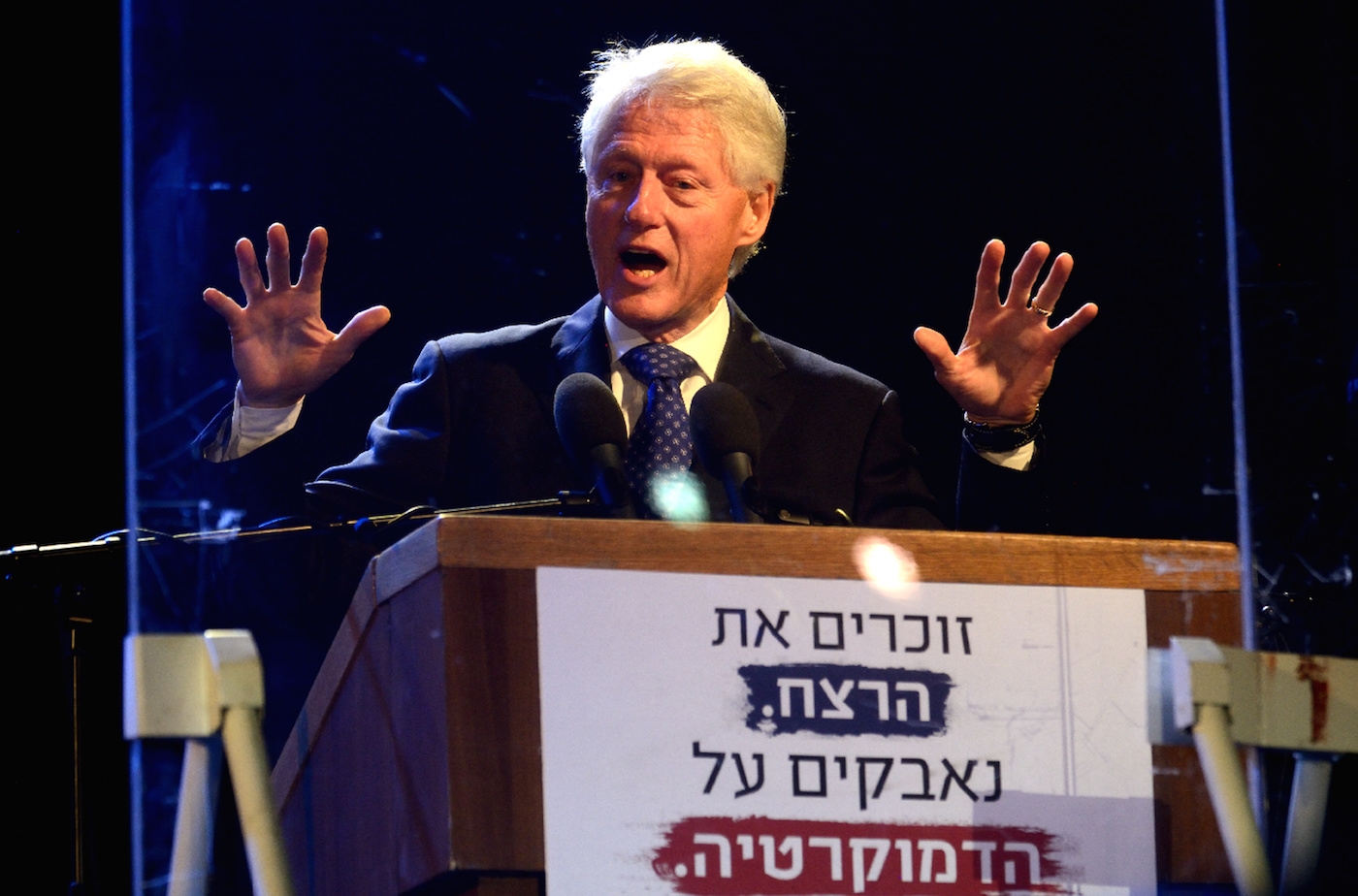 The addresses that did focus on social solidarity and respect for democracy in turn made little mention of the peace process. Israeli President Reuven Rivlin thanked Israelis for their resilience and — having himself received death threats — declared that leaders fighting extremism are not afraid. But in praising Israeli democracy, he also obscured the distinction between Israel and its West Bank settlements.

“Even in the midst of the current bloodshed, even in the face of the heinous terrorism which does not distinguish between Tel Aviv and Gush Etzion, Beersheva and Kochav HaShachar, Israel’s democracy has not ceased to realize its strength and resilience,” Rivlin said, naming a pair of Israeli cities and a pair of settlements. “And for this we are today filled with pride.”

Even the signs in the crowd were split. Some stated “It is forbidden to raise a hand against democracy.” But others, sponsored by Peace Now and Israel’s left-wing parties, carried slogans like “Rabin understood: two states,” or a sign with Rabin’s face and the word “leadership” on one side, and Netanyahu’s face and the word “cowardice” on the other.

Tal Segev, 15, a member of the Scouts youth group holding a Peace Now sign, said he came to the rally “to emphasize that the message won’t be forgotten, the message of peace.”

But Eliad Avreki, 35, one of the few men in the crowd wearing a kippah, said the rally was “not a matter of right or left.” The focus, he said, should be on promoting civil dialogue to prevent extremist acts. A coordinator for the religious Zionist, pro-settlement youth group Bnei Akiva, Avreki said he went to anti-peace process rallies before Rabin’s assassination, but sobbed when he heard about his death.