Obama wants to hear how Netanyahu will preserve 2-state option 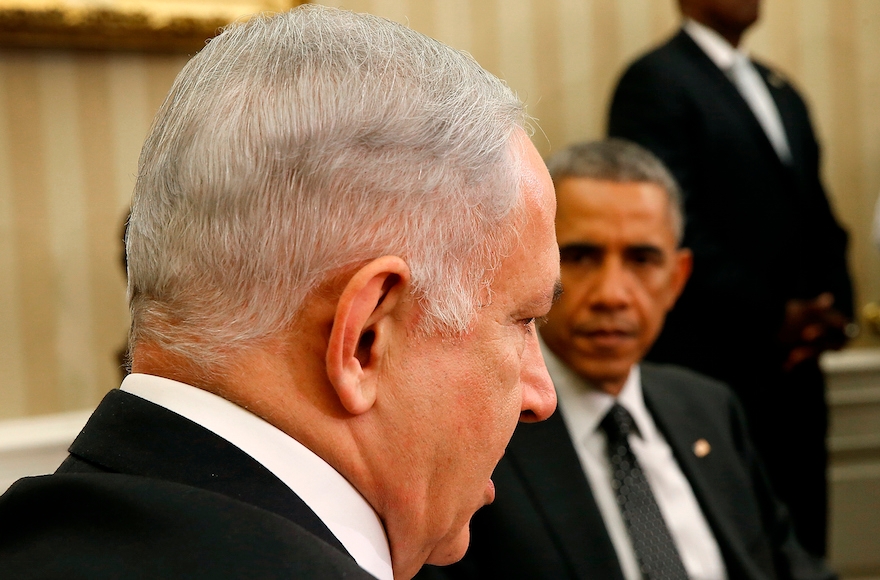 The officials, Robert Malley, the top National Security Council official handling the Middle East; Ben Rhodes, another top NSC official, and Dan Shapiro, the U.S. ambassador to Israel, said in a conference call with reporters on Nov. 5 that the administration no longer held out hope of revived peace talks before Obama’s presidency ends in January 2017.

“For the first time since the Clinton administration, the prospect of a negotiated solution” is not likely in the near term, Malley said.

“Given that reality, how does Israel itself see itself going forward, what can be done in the absence of a negotiation between the parties to help stabilize the situation on the ground, to signal they are moving toward a two-state solution?” he asked.

The officials said they expected Netanyahu to provide answers to those questions, particularly in the realm of settlement building in the West Bank and other “steps to preserve confidence” and “safeguard the possibility of a two-state solution,” in Malley’s words.

The Obama administration has been calling on both sides to tamp down recent tensions that have led to deadly Palestinian attacks on Israelis. Many Palestinians have been killed in the violence, many of them assailants, and some have criticized Israeli security forces with being too quick to kill rather than subdue attackers. Much of the tensions have focused on the status of the Temple Mount, or the Haram al-Sharif, the Jerusalem site holy to Muslims and Jews.

The officials emphasized several times that the Obama administration similarly expected Palestinians to stop terrorism and incitement against Israelis.

“We clearly have been in a difficult period with violence on the ground in Israel and the Palestinian territories,” Shapiro said.

Peace talks between the Netanyahu government and the Palestinian Authority led by Mahmoud Abbas collapsed in April 2014 amid recriminations among the U.S., Israeli and Palestinian teams, and continued acrimony between Abbas and Netanyahu has all but counted out their resuscitation while both men still lead.

Exchanges have been especially sharp as a result of the Temple Mount tensions, with each government accusing the other of stoking incitement, although both security establishments are still working closely to stop the violence.

The meeting Monday between Obama and Netanyahu will be their first since the Israeli elections in March, when Obama first said his administration would reassess how best to preserve the two-state solution.

The reassessment was triggered by Netanyahu’s pledge on the eve of elections in Israel not to allow a Palestinian state to arise on his watch, and by the composition of the coalition – the first since the Oslo Accords in 1993 not to include a party committed to two states.

In the interim, there were also tensions over the nuclear deal between Iran and six major powers, which Netanyahu vehemently opposed and Obama backed. The officials said Iran would be on the agenda at the meeting, but added that the Obama administration hoped to look forward to how best to implement the deal and not to dwell on the differences.

Rhodes praised Netanyahu for reaching out to Democrats during his visit through a talk at the party-aligned Center for American Progress think tank, saying that it was critical to maintain bipartisan support for Israel frayed through the Iran debate.

“We do think it’s a positive and constructive step for the prime minister to speaking at the American Enterprise Institute,” a conservative think tank, “and also the Center for American Progress, to demonstrate appreciation for the fact there is bipartisan support,” Rhodes said.

Rhodes said that the leaders would not discuss the controversy over Netanyahu’s recent appointment of a spokesman who in the past derided Obama as anti-Semitic and claimed that Secretary of State John Kerry was mentally impaired.

He did, however, make clear that the Obama administration expected some action from Netanyahu, who has said he is reconsidering the appointment.

“It’s a matter for the Israeli government to explain their own appointments,” he said.

Also on the agenda is a new 10-year memorandum of understanding to succeed the current one, due to lapse in 2018, which directs an average of $3 billion a year in defense assistance to Israel.