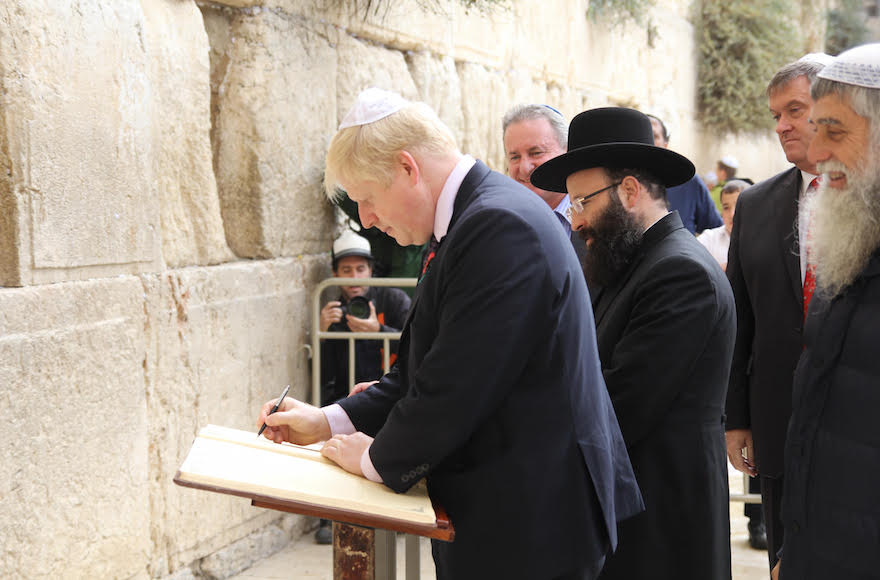 JERUSALEM (JTA) — London Mayor Boris Johnson had two of his planned meetings in the West Bank cancelled after he criticized boycotts of Israel.

Johnson was due to meet Wednesday in the West Bank with the Palestine Business Women’s Forum and a Palestinian youth group. Both meetings were cancelled after Johnson, who is on a three-day trade mission to Israel, criticized efforts to boycott Israel as “foolish” and assailed its proponents in England as “ridiculous snaggle-toothed, corduroy-wearing, lefty academics.”

There were conflicting reports over why exactly the meetings didn’t go ahead as planned. The youth group said it disinvited Johnson over his “inaccurate, misinformed and disrespectful remarks.”

But Johnson told reporters that the meetings were cancelled over security concerns stemming from the strong reaction his comments had prompted on social media.

Johnson’s meeting with Palestinian Prime Minister Rami Hamdallah went ahead as planned, but journalists were not allowed to attend.

Also on Wednesday, during a visit to the Western Wall in Jerusalem, Johnson told Rabbi Shmuel Rabinowitz, rabbi of the Western Wall and Holy Sites, that there are Jews in his family on his maternal side, according to a statement from Rabinowitz’ office. Johnson is Anglican.

“It is a great privilege to come to this Wall for the first time in my life and I join the prayers for peace in Jerusalem,” he wrote in the visitors’ book.