How JTA helped a Christian hate monger change her ways 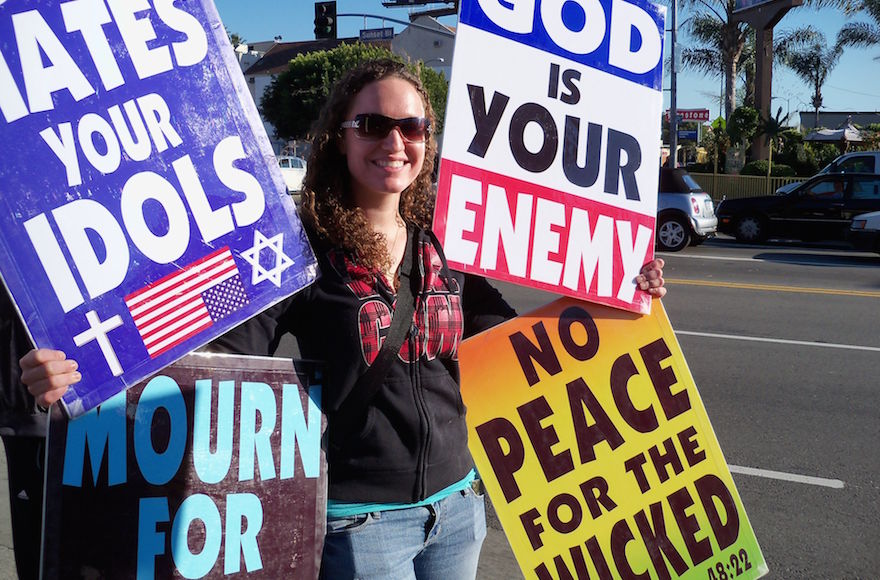 This week’s issue of the New Yorker has an amazing story about how Megan Phelps-Roper came to leave Westboro Baptist Church, the Kansas-based congregation notorious for picketing the funerals of gay men and American soldiers killed overseas with signs like “God Hates Fags” and “Thank God for Dead Soldiers.”

It turns out her exit was facilitated by a list of prominent Jewish Twitter users published by JTA in 2009.

Phelps-Roper is the granddaughter of church founder Fred Phelps, the man who pioneered the church’s radical theology, highlights of which include the claim that President Barack Obama is the antichrist and the celebration of the AIDS epidemic as God’s strategy to rid the world of the evil of homosexuality.

Phelps-Roper was born and raised in Westboro Baptist Church and became what might be called its director of social media. But by 2009, she was having some doubts about church teaching. So she turned to Twitter for answers.

We were making specific predictions about things without having, in my mind, sufficient scriptural support,” she said. Many other members shared her bewilderment, she found, and so she turned to Twitter for answers. Most of the prophecies centered on Jews, so she found a list, published by the Jewish Telegraphic Agency, a syndicated news service, of the hundred most influential Jewish Twitter users. She created an account under the pseudonym Marissa Cohen and followed many of the people on the list, hoping to learn if Westboro’s prophecies were coming true.

The JTA list was compiled by former staffer Adam Soclof. Twitter was then in the midst of exponential growth in usage worldwide, and Soclof set out to determine which Jewish tweeters were having the most influence. Coming in at No. 2 was David Abitbol, a web developer and founder of the blog Jewlicious. Phelps-Roper and Abitbol struck up a web friendship that ultimately led to her separation from the church.

Phelps-Roper got into an extended debate with Abitbol on Twitter. “Arguing is fun when you think you have all the answers,” she said. But he was harder to get a bead on than other critics she had encountered. He had read the Old Testament in its original Hebrew, and was conversant in the New Testament as well. She was taken aback to see that he signed all his blog posts on Jewlicious with the handle “ck”—for “christ killer”—as if it were a badge of honor. Yet she found him funny and engaging. “I knew he was evil, but he was friendly, so I was especially wary, because you don’t want to be seduced away from the truth by a crafty deceiver,” Phelps-Roper said.

Abitbol had learned while running Net Hate that relating to hateful people on a human level was the best way to deal with them. He saw that Phelps-Roper had a lot of followers and was an influential person in the church, so he wanted to counter her message. And he wanted to humanize Jews to Westboro. “I wanted to be like really nice so that they would have a hard time hating me,” he said. One day, he tweeted about the television show “Gossip Girl,” and Phelps-Roper responded jocularly about one of its characters. “You know, for an evil something something, you sure do crack me up,” Abitbol responded.

There’s lots more in the piece, including how Phelps-Roper went on to appear at a festival Abitbol organized in California. Read it in its entirety here.