Giving thanks for a fight-free Thanksgiving 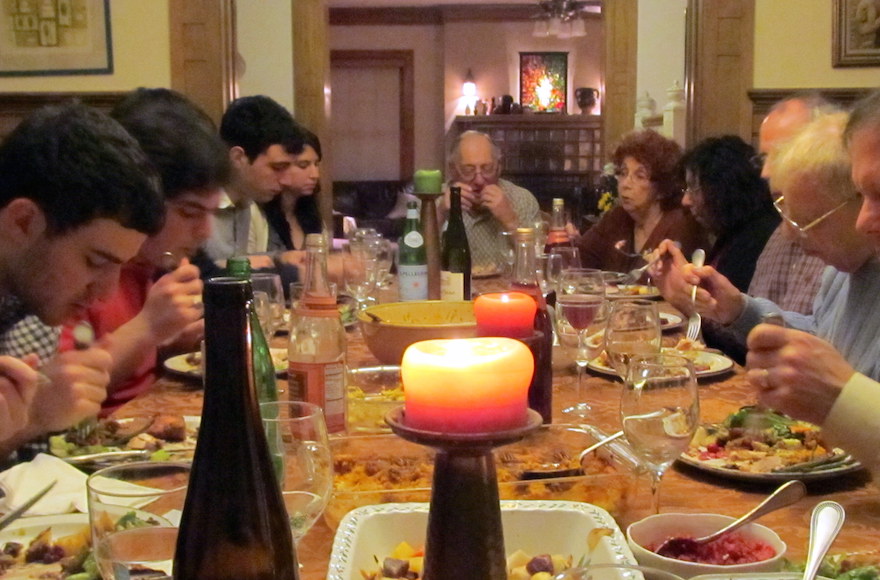 Thanksgiving at the author's house. Just because the meal is largely a secular one for Jews, don't assume our adherence to tradition is given the day off. (Edmon J. Rodman)
Advertisement

LOS ANGELES (JTA) — As my family — and families across the country — begin preparations for the Thanksgiving feast, I started to wonder what kind of family tsuris could rend this day of plenty, pilgrims and, well, pigskin, asunder.

Even in this season of presidential candidate debates, I knew that the table divider at my house probably wouldn’t be politics — after all, only some 6 percent of Americans have had a Thanksgiving dinner ruined by a political argument, according to a Economist/YouGov poll taken last December. But what about politics of a more familial kind?

This year, with my own family coalition coming over to partake in the feast, I didn’t want any infighting. After all, Thanksgiving is historically an important day for both sides in a potential conflict to come together — the day is imbued with the story of Wampanoag Native Americans joining the Pilgrims for that first dinner held in Plymouth Colony in 1621. Edward Winslow, who attended, wrote in a letter to a friend “many of the Indians coming amongst us, and among the rest their greatest king Massasoit, with some ninety men, whom for three days we entertained and feasted, and they went out and killed five deer.”

Though our plans were smaller scaled, and did not include a hunting party, we did plan on entertaining for a few hours, and wanted to do it in happy union with our family.

Moreover, on the Shabbat the week of Thanksgiving this year, we read from the portion Vayishlach, which relates the story of how Jacob and Esau — brothers estranged by a birthright that a hungry, impulsive Esau sells for a bowl of stew — reconcile. Years have passed, each is successful in his own right, but Esau is coming with 400 men. Is he going to settle the score?

Though my family arrives at my door without an army, each family gathering does present the opportunity for slights to be addressed and wounds reopened. In the Bible, Jacob sends ahead gifts to his brother to ease the tension. In our invitations to Thanksgiving dinner, I also suppose we send an offer of potential reconciliation of family issues.

READ: At Thanksgiving time, an exercise in mindfulness

Setting aside my projection that our table could be split between Clinton and Sanders supporters — I do have a right-leaning nephew, but he’s celebrating Thanksgiving elsewhere — I could see that there were other factors, aside from voting patterns, that could divide our company: important things like stuffing and cranberry preferences.

In the wake of terrorist attacks in France and the stabbings in Israel, peacefully resolving family disputes may seem trivial — that is until the blow-up happens around your own table, as it did at my mother’s house one year when a guest showed up totally shickered. It also happened at another Thanksgiving when an Orthodox vegetarian refused to even pass the turkey platter.

Like a lot of baby boomers, with parents aging or passing away, my family has experienced recent shifts surrounding Turkey Day. For decades, my wife’s aunt and uncle hosted Thanksgiving dinner; guests were required only to contribute good cheer. But with her passing a few years ago, my wife and her sister began to prepare separate holiday dinners.

Then, three years ago, after my sister-in-law became ill with cancer — today she is cancer-free, something to be especially thankful for — we offered to host Thanksgiving for both families.

So now, the entire mishpocha, comprised of around 16 politely opinionated people, comes to our Los Angeles home. Just throw a bigger turkey in the oven and schlep out a few more chairs, right?

But just because the meal is largely a secular one for Jews, do not think for a second that our preferences for “traditional” flavors — whatever they may be — are given the day off. For many families, there’s only one way to prepare the turkey, the yams, the pie — and only that way will keep peace at the table.

Turning to the Bible, there is a portion (Genesis 18) when Abraham suddenly realizes that he and Sarah are going to have angelic guests — the literal and not behavioral kind — in their tent. They rush about preparing the food and seeing to the comfort of their divine guests — so much so that when hospitality, or “hachnasat orchim,” is discussed in a Jewish context, these verses are often cited.

READ: Making a leap to feed the needy during Thanksgiving

Yet, no matter how fine a model are Abraham and Sarah as hosts, they did not have to divvy up the food assignments among branches of their family, each with their own tribal preferences.

Many Thanksgiving dinners today are group endeavors, even potluck, and ours is not the exception. My brother-in-law and his wife supply salad and drinks, my sister-in-law brings a kugel and mother-in-law buys knishes (this is, after all, a Jewish meal).

But for the traditional Thanksgiving must-haves, nothing is left to chance — in fact, there is planned redundancy. That is, to keep everything copacetic between the two sisters (who deny any competition), there are two of most everything: two styles of stuffing (one with kosher sausage, the other with challah and vegetables), two types of cranberry sauce (a cranberry orange relish and a sauce made with wine and nuts), plus two vegetables and yams.

Though there’s barely enough room at the table for all the dishes, I must say that all the passing does keep us together. And we’re careful not to play favorites: There’s no singing the praises of one cook’s dish without a favorable comparison to the other’s offering.

There can be no table cliques or caucuses. We dine together or we dine alone. If this is the price of Thanksgiving “shalom bayit,” peace in the house, then call me a satisfied and satiated fan.