Rare numbing disease that plagues Jews has diagnosis, but no cure 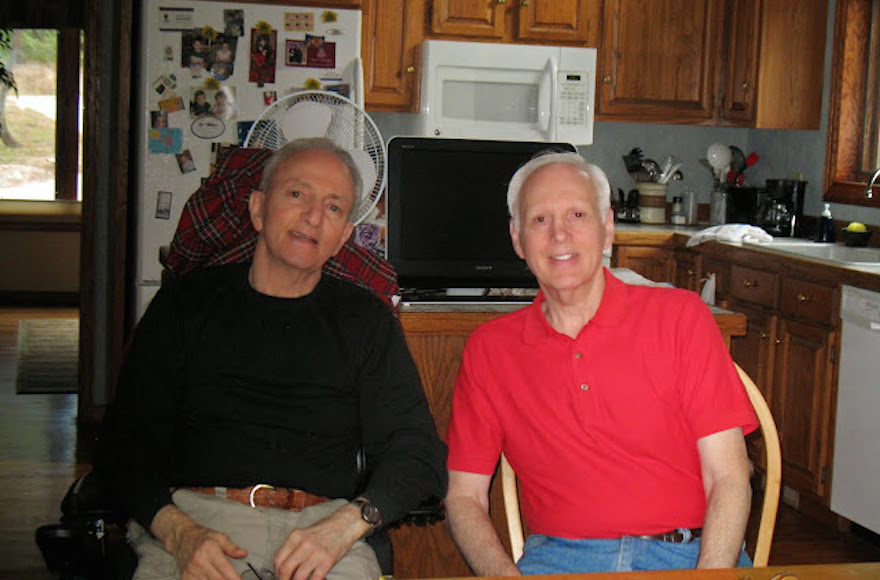 David Epstein, left, and his brother, Howard Epstein, both have APBD, which is more prevalent among Ashkenazi Jews than in the general public. (Courtesy of David Epstein)
Advertisement

SILVER SPRING, Md. (Washington Jewish Week via JTA) — David Epstein went to his doctor in 1997 to see why he was going to the bathroom so frequently and what was causing his fingers to go numb.

Finally, in 2011, Epstein, who lives in the Leisure World retirement community here, learned he had Adult Polyglucosan Body Disease, or APBD, a genetic disorder with no treatment or cure. The disease results in reduced activity of the glycogen branching enzyme, which is used to make glycogen. Glycogen is the reserve fuel stored in a person’s cells.

One in 68 Ashkenazi Jews is a carrier of at least one of the two gene mutations that cause this frequently misdiagnosed disease. The carrier frequency among the general population is unknown but lower, said Dr. Jeff Levenson, a volunteer assistant at the Adult Polyglucosan Body Disease Research Foundation in New York.

For a person to inherit the disease, both parents must be carriers.

A test for the mutations has only been recently added to a disease panel that Ashkenazi Jews can be tested for at Mount Sinai Hospital in New York. Levenson is hopeful that once more people learn about APBD, testing for the mutation will increase.

A person with the disease has a shorter than average life expectancy, Levenson said. “Usually by age 50, although we have patients in their 30s,” APBD “wreaks havoc” on the bodies of people with mutations to this enzyme, he said.

APBD is extremely rare; only 160 to 200 cases have been documented. But Levenson believes “there are thousands out there” living with undiagnosed APBD.

Sufferers often are told they have multiple sclerosis, Lou Gehrig’s disease, prostate disease or some form of nerve damage, and suffer though years of medical testing and treatments.

“On average, it takes seven years to find a diagnosis,” Levenson said.

Meanwhile, numbness continues to move from the outer extremities up the legs and arms. Balance is affected.

“I went through the medications and nothing worked,” Epstein said.

Almost 15 years after the onset of symptoms, Epstein, 70, finally received the correct diagnosis after undergoing tests at the Kennedy Krieger Institute in Baltimore.

By this time, numbness had “slowly worked its way up from my feet, to my ankles, shins and knees. It’s progressive so the further down the leg, the more the numbness,” said Epstein, who is retired from his job as a financial manager with the federal government.

He occasionally uses a cane while walking at night. Epstein said his brother, Howard, needs a wheelchair.

While frustrated with his doctors’ ignorance about the disease, Epstein said his condition would likely be the same even if he had been diagnosed right away because there is no treatment for APBD.

He tries to stay active by walking, riding a stationary bike and doing balancing exercises with a physical therapist. “Hopefully this will delay,” Epstein said, referring to the increased medical problems he knows are headed his way.

A 70-year-old Atlanta attorney, who asked that his name not be used, isn’t sure how long he’s had APBD symptoms. He didn’t go to the doctor early on for what he considered minor problems, said his wife.

The attorney retired when he was in his early 60s, and around that time he began stumbling and appeared stooped over. One of his two children told him he seemed drunk, his wife recalled. He soon found himself exhausted after only walking a block, whereas he had previously traversed an 18-hole golf course on a regular basis, she said.

He now needs a wheelchair to get around.

At various times, the attorney was told he had neurological problems or advanced multiple sclerosis and was given “heavy drugs,” his wife said.

Both Epstein and the Atlanta couple are involved in efforts to increase the number of people on the Adult Polyglucosan Body Disease Research Foundation’s patient registry.

“It allows researchers to understand more of the natural history of the disease, how it progresses over time,” Epstein said of the registry, which includes medical histories.

Playing on the acronym for the disease, the foundation encourages anyone who (A) is an Ashkenazi Jew, (P) has peripheral numbness or weakness, (B) uses the bathroom frequently and (D) has diminished energy to take a saliva sample that Columbia University in New York will analyze to check for the disease.

The foundation created a two-page open letter to Jewish community members and leaders that explains the disease, urging anyone who suspects they may have it to get in touch. With more patients on the registry, the chances of a drug company working for a cure increases, according to the letter.

“This is really the wild, wild West,” he said.