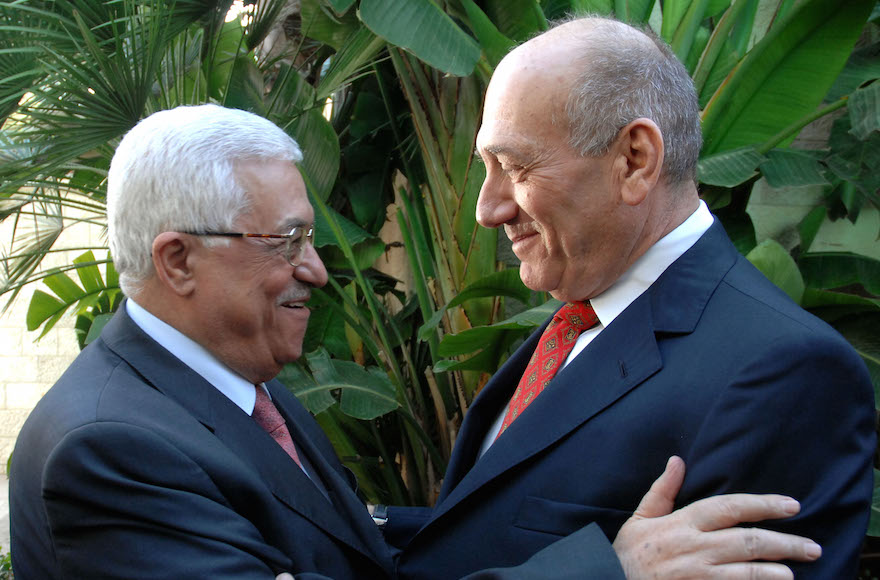 (JTA) — Palestinian Authority President Mahmoud Abbas said he rejected a 2008 peace offer from Israeli Prime Minister Ehud Olmert because he was not allowed to keep the map depicting the proposed Israeli-Palestinian borders.

According to The Associated Press, both Abbas and Olmert revealed new information about negotiations that year in separate interviews with Israel’s Channel 10 TV broadcast on Tuesday.

In the interview, Olmert described a meeting on Sept. 16, 2008, in which he presented an offer seeking to address all major Palestinian concerns.

“I told him, ‘Remember my words, it will be 50 years before there will be another Israeli prime minister that will offer you what I am offering you now. Don’t miss this opportunity,'” Olmert said in the interview.

Olmert said he had proposed that Israel withdraw from all but 6.3 percent of the West Bank and offered to compensate the Palestinians with Israeli land equivalent to 5.8 percent of the West Bank, along with a link to the Gaza Strip. He also said he offered to withdraw from Arab neighborhoods of eastern Jerusalem and place the Old City — home to the Western Wall and Temple Mount — under international control.

Abbas said Olmert pressured him to agree without giving him a copy of the proposed map to scrutinize.

“He showed me a map. He didn’t give me a map,” Abbas said. “He told me, ‘This is the map’ and took it away. I respected his point of view, but how can I sign on something that I didn’t receive?”

Olmert confirmed that he pressed Abbas to agree on the spot.

The Palestinian leader said negotiations continued after that exchange but eventually broke down due to Olmert’s legal problems. The former prime minister was convicted last March on bribery and corruption charges and sentenced to more than six years in prison, although he remains free during the appeals process.

Abbas said the talks with Olmert were the most serious since the Oslo Accords of 1993.

“I feel if we had continued four to five months, we could have concluded the issues,” Abbas said.

In his interview, according to the AP, Olmert said his politics had shifted while he was mayor of Jerusalem and decided it was not feasible for Israel to continue controlling the city’s Palestinian neighborhoods.