In ‘Blind Love’ doc, Israelis learn to be witnesses to Nazi cruelty 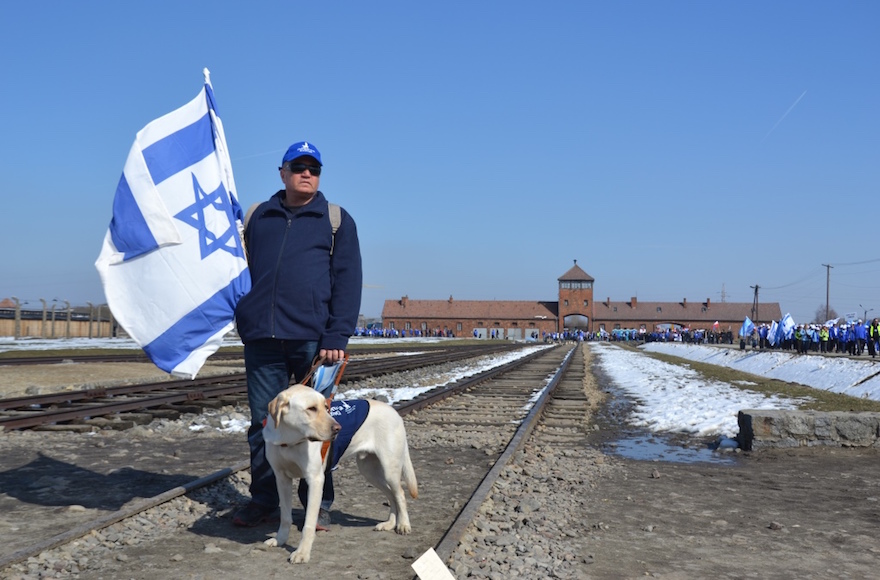 A blind participant in the March of the Living featured in the new documentary "Blind Love." (Eli Ben Boher)
Advertisement

TORONTO (JTA) — Fingers flit over a tombstone in Warsaw’s Jewish cemetery, caressing its faded Hebrew letters. Feet stumble on pathways at a Nazi death camp, crooked and strewn with stones. Kaddish, the Jewish prayer for the dead, punctures the sound of rustling leaves and hard rain in rural Poland.

A woman reads aloud, from Braille, the story of the 1,400 Jews from the Polish village of Tykocin who were marched to nearby woods and machine-gunned into mass graves in August 1941. Her voice chokes as her fingers fly across the page.

In the film “Blind Love: A Holocaust Journey Through Poland with Man’s Best Friend,” everything but eyes do the communicating.

Touted as the first documentary about blind people traveling to Poland to learn about the Holocaust, the film follows six Israelis with varying degrees of visual impairment who took part, along with their guide dogs, in the March of the Living, the annual educational trip to the Auschwitz and Majdanek death camps in Poland.

“We as blind people can’t see our surroundings,” explains one participant, “but if we go to certain places, we need to find a trigger to get our imagination going.”

Premiered this month in Toronto as part of the city’s annual Holocaust Education Week, and broadcast three days later on national television, “Blind Love” packs an emotional punch out of proportion to its short run time of just 28 minutes, showcasing the deep and mutual devotion the visually impaired have with their guide dogs.

In one heartrending scene at Majdanek, Liron Artzi, a 30-year-old partially sighted lawyer from Tel Aviv, is overcome with emotion — scared “beyond belief,” she allows. Artzi asks her dog, Petel, for comfort. The canine complies by licking the tears from her face.

“Here a dog tries to comfort her master,” observes Michael Enright, the Canadian Broadcasting Corp. radio personality who narrates the film, “showing endless love and affection in a place of endless hate and cruelty. Blind love instead of blind hate.”

The visually impaired participants on the 2012 and 2013 trips traveled to Warsaw, Tykocin and Lublin, and the former death camps of Majdanek and Auschwitz-Birkenau. Standing before mounds of prosthetic limbs surrendered by new arrivals at Auschwitz, it’s not lost on them that as Jews with disabilities, they would have been among the Third Reich’s first victims. As the film relates, some 200,000 disabled Germans were murdered by the Nazis in the T-4 euthanasia program that served as the model for later mass killings.

“Blind Love,” now widely in demand by schools, broadcasters and film festivals in Israel, Poland and the United States, owes its origins to producer Eli Rubenstein, national director of March of the Living Canada and chairman of Canadian Friends of the Israel Guide Dog Center. The film was funded by private donors to the center, the Canadian government and the Claims Conference. 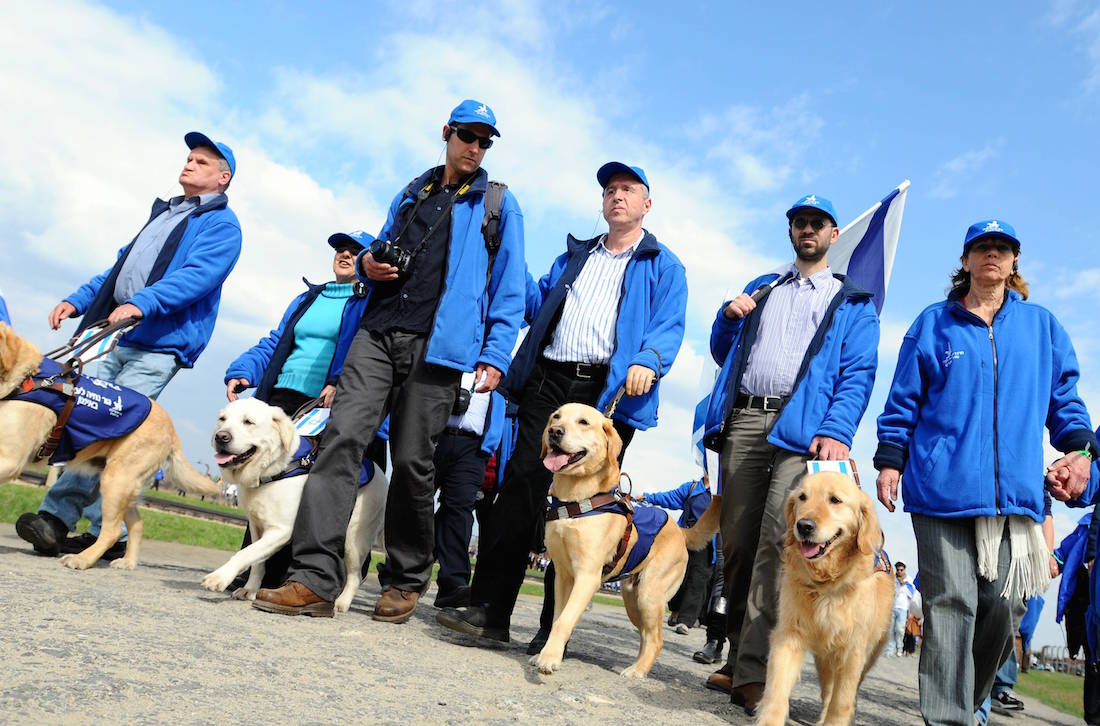 Participants in the March of the Living walking with their guide dogs. (Yossi Zeilger)

“Without fail, almost every single blind person I met expressed a real interest in coming on the March of the Living,” Rubenstein told JTA. “Their responses were very instructive: ‘We’re part of the Jewish community.’ And many of them directly lost family in the Holocaust. They said, ‘We mourn the loss just like you and when we come back, we want to teach and share and have others hear what we’ve heard.’”

Amir Haskel, the group’s guide in Poland, calls the journey “important to any person, whether sighted or blind.” The challenge, he says in the film, is to use “description [and] explanation through the sense of touch.”

The documentary also focuses on the role of dogs during the Holocaust, when the Nazis trained the animals as weapons and used them to terrorize arrivals at the death camps as they staggered off trains. David Shentow, an Ottawa Holocaust survivor and March of the Living participant, recalls one particularly disturbing memory as a 17-year-old arriving at Auschwitz. 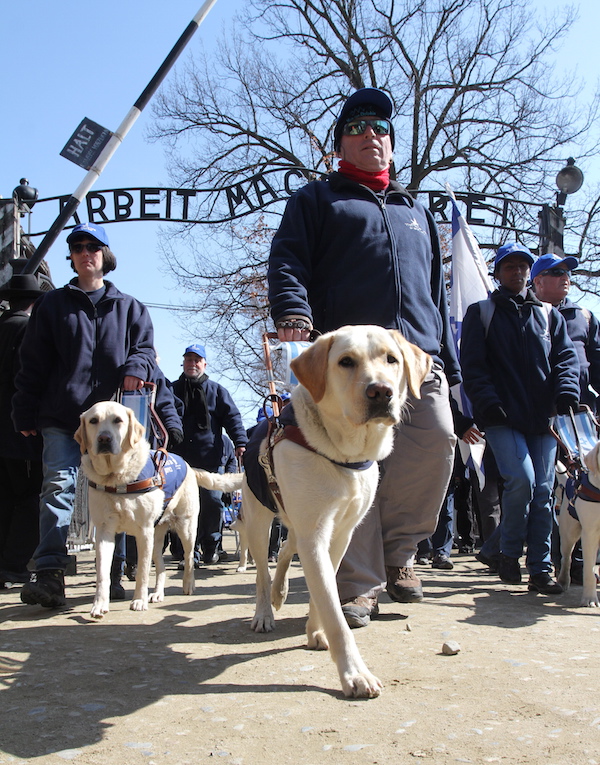 A blind participant in the March of the Living visiting Auschwitz. (Jacek Bendarczyk/EPA)

After the Jews were ordered to leave their luggage on the train, one arrival asked an SS officer if he could retrieve a photograph from his bag.

“The SS [man] lost his temper and let his dog loose,” Shentow says calmly in the film. “[It] flew in the air straight to the man’s neck. As the man stopped moving, I thought, ‘My God, that man is dead.’ This was the first 10 to 15 minutes. I knew I’m in hell.”

Moti Levy, a 59-year-old blind computer scientist, says he “knew a lot about the Holocaust” going into the journey. But once in Poland, “I could experience with my hand, with my hearing and with the smells,” he later told The Jerusalem Post.

“In Auschwitz, you can smell the basement and the stale smell of old things in the barracks where all the items are stored,” Levy told the Post. “In Majdanek, I could feel the fence with the barbed wire. I touched things and I understood. We walked the same paths that they had walked.”

Participants on the trip “may have a disability, but that doesn’t stop them in all sorts of other ways [in] wanting to be part of the Jewish community and wanting to share their experiences,” Rubenstein said. “I think for them the Holocaust resonates even more.”