What Patriots owner Robert Kraft has done for the Jews 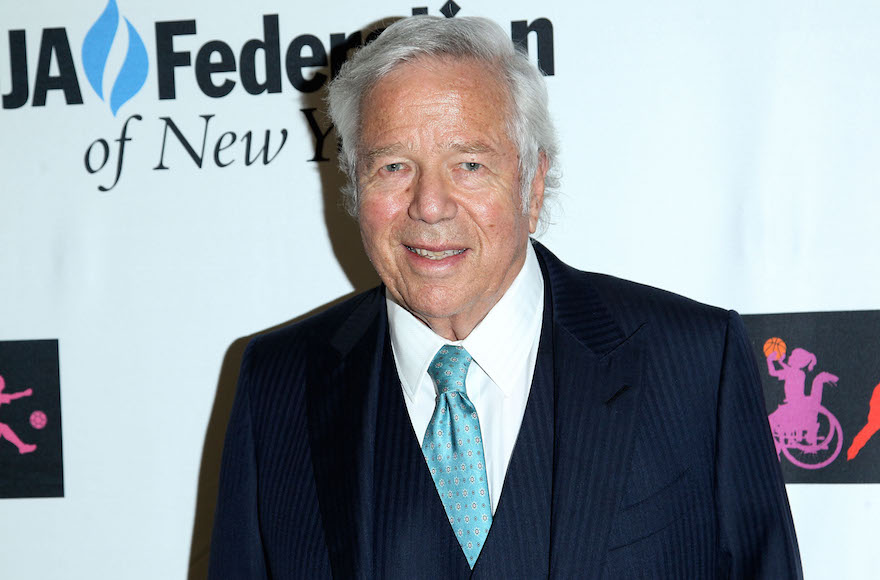 Patriots owner Robert Kraft will be in the stands this Sunday to see if his New England Patriots can win a sixth Superbowl. But in Jewish circles, Kraft may be almost as well-known for his generosity and devotion to Jewish and Israeli causes as for the exploits of his NFL team.

Over decades, the Kraft family has given away more than $100 million to a variety of causes, including health care, education, the Jewish community, Christian organizations and local needs. And as of 2013, the Kraft family philanthropic foundation had nearly $88 million in assets.

Here’s where some of Kraft’s Jewish gifts have gone in recent years, and some other ways he’s displayed his Judaism.

In November 2015, the New England Patriots observed a moment of silence before their NFL game against the Buffalo Bills to memorialize Ezra Schwartz, the Jewish 18-year-old from Sharon, Massachusetts, who was killed last week by a Palestinian gunman in the West Bank that month.

There’s hardly a Jewish institution in the Boston area that hasn’t benefited from Kraft’s largesse, starting with the local federation, Combined Jewish Philanthropies, which in 2013 was the single-largest recipient of funding from the Robert and Myra Kraft Family Foundation. Among the other local Jewish institutions Kraft supports have been his late wife’s alma mater, Brandeis University, as well as Jewish schools, Jewish family services and synagogues. Kraft grew up in Congregation Kehillath Israel in Brookline, where his father, Harry Kraft, taught Hebrew school, and now attends Temple Emanuel in Newton, Massachusetts.

A month and a half after the October shooting at the Tree of Life synagogue in Pittsburgh, Kraft traveled to the city to see the Patriots face off against the Steelers. On the Saturday before the game, he visited the synagogue to pay homage, then attended services at the nearby Rodef Shalom synagogue, where he was invited to speak. During the game the next day, Julian Edelman, the Patriots’ wide receiver, wore cleats that read “#StrongerThanHate” and displayed the name of Tree of Life in Hebrew beside the synagogue’s logo.

The Hillel center of Columbia University and Barnard College is housed in the Kraft Center for Jewish Student Life, so named for the family that donated the building, which stands out in the Manhattan neighborhood for its limestone façade typical of buildings in Jerusalem. Kraft, who graduated Columbia College in 1963, also gave $5 million several years ago to help support Columbia athletics. Not that it’s helped the Columbia Lions, who recently went two straight years without winning a single football game. Kraft and his family also have endowed chairs in Jewish studies at Boston College and the College of the Holy Cross in Worcester, Massachusetts, and endowed a chair in Christian studies at Brandeis.

The artificial-turf athletic field near the main entrance to Jerusalem, the Kraft Family Stadium, is a Kraft gift that’s used for soccer, baseball and, yes, football. Kraft’s late wife, Myra Kraft, also supported the Israeli women’s national flag football team and Ethiopian immigrant absorption in Israel. The Krafts were instrumental in developing the sister city partnership between Haifa, Israel, and Boston and have sent numerous Patriots players to the Jewish state. And Edelman went to Israel in the summer of 2015.

Where else has Kraft been giving?

In 2013, the Robert and Myra Kraft Family Foundation gave its top gifts to CJP – Boston’s Jewish federation ($1.12 million), and to Brandeis ($1.1 million), Myra Kraft’s alma mater. The foundation’s next-largest gift that year, $350,000, went to Columbia. Other Jewish beneficiaries among the 28 recipients that received more than $25,000 included $93,000 to the Jerusalem Foundation for athletic activities; $50,000 to Columbia’s Hillel; $50,000 to the World Jewish Congress (American section); $35,000 to the Friends of the Israel Defense Forces, and $31,036 to Temple Emanuel in Newton, Massachusetts.

Chabad of Jackson Hole, Wyoming, the Boston Jewish film festival and Kehillath Israel in Brookline were among the Jewish recipients under the $10,000 level.