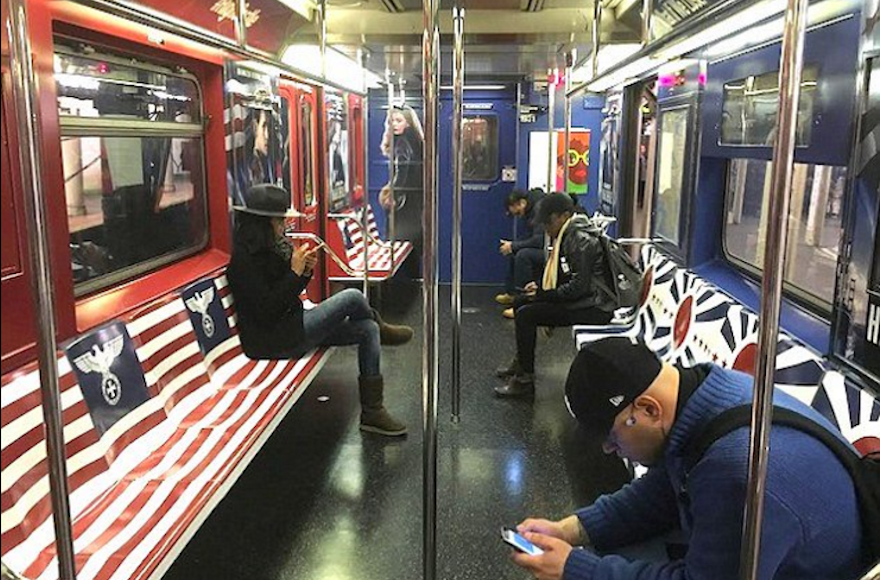 These ads for an Amazon series have caused controversy. (Screenshot from Twitter)
Advertisement

NEW YORK (JTA) — Amazon is removing its Nazi-symbol-laden ads for “The Man in the High Castle” television show from a highly trafficked New York subway line.

A spokesman for New York’s Metropolitan Transit Authority confirmed to Gothamist on Tuesday that Amazon was pulling the wraparound advertisements featuring a modified Nazi Reichsadler eagle and a variation of a World War II-era Japanese flag from the 42nd Street shuttle.

The ad campaign, which caused a stir on Tuesday, was scheduled to run through Dec. 14.

Earlier in the day, New York Mayor Bill de Blasio said, “While these ads technically may be within MTA guidelines, they’re irresponsible and offensive to World War II and Holocaust survivors, their families, and countless other New Yorkers. Amazon should take them down.”

“The Man in the High Castle,” based on a 1962 science fiction novel by Philip K. Dick, depicts an alternate history of the world in which the Nazis won World War II and partitioned the United States into new areas.

MTA instituted a policy in April that bans political ads from its subways and buses. Under the resolution, MTA permits only the display of commercial advertising, public service announcements and government messages on its buses and subways.

READ: What if the Nazis had won? Amazon’s new drama answers that question — slowly

The Amazon ads do not violate this policy, an MTA spokesman told The Gothamist, which first reported the ad campaign.

“The updated standards prohibit political advertisements. Unless you’re saying that you believe Amazon is advocating for a Nazi takeover of the United States, then it meets the standards. They’re advertising a show,” MTA spokesman Adam Lisberg told The Gothamist.

“Half the seats in my car had Nazi insignias inside an American flag, while the other half had the Japanese flag in a style like the World War II design,” commuter Ann Toback, executive director of The Workman’s Circle, a Jewish organization, told The Gothamist. “So I had a choice, and I chose to sit on the Nazi insignia because I really didn’t want to stare at it.  I shouldn’t have to sit staring at a Nazi insignia on my way to work.”