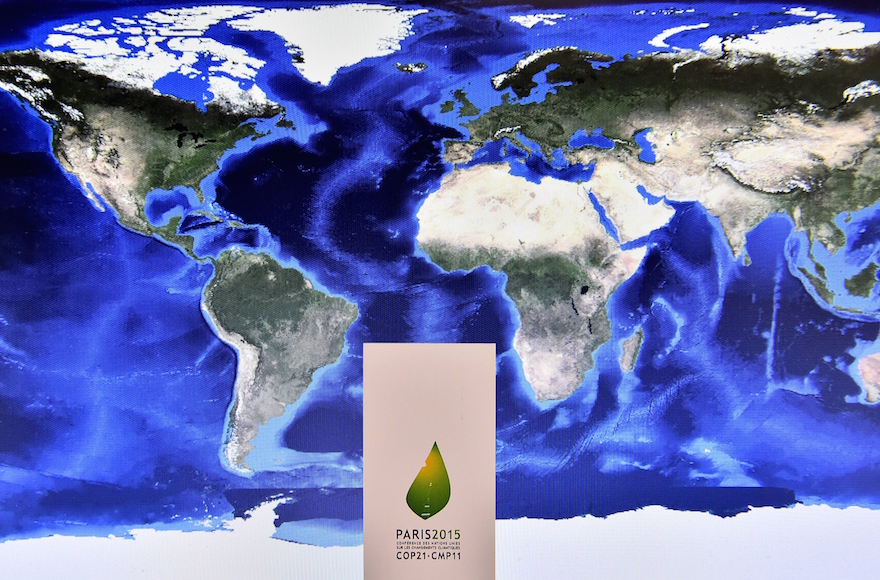 The logo of the United Nations climate conference in front of a planisphere at Le Bourget, on the outskirts of Paris, Dec. 1, 2015. (Loic Venance/Getty Images)
Advertisement 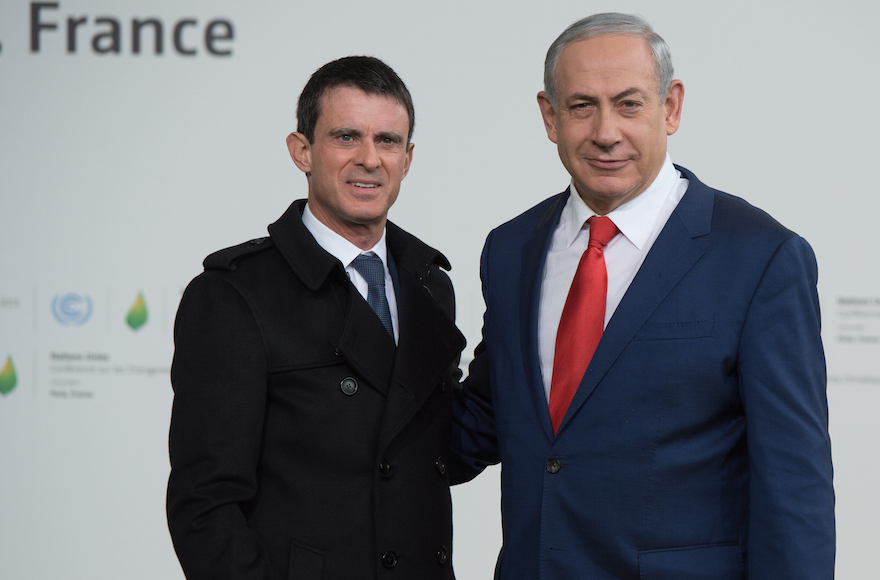 LE BOURGET, France (JTA) — There is a Jewish blessing when one is in the rare presence of a national leader. But what is the blessing when the single largest gathering of world leaders in history — 150 in one day — come together outside Paris with soaring rhetoric and promises to fight the devastating effects of climate change?

Paris is guarded and mourning weeks after the deadly Nov. 13 terror attacks that killed 130, and yet the city was twinkling and alive as it plays host to this historic global climate summit. The gathering is a marathon negotiation against a ticking carbon clock, whose alarm went off a decade ago and yet only now the wary hand of humanity seeks to hit the pause button. Among the diverse crowd of tens of thousands, I am, as far as I can see, the only one wearing a kippah — knitted and green, proud to be on the official Israeli delegation of more than 50 people. Yet I’m ashamed that my instinct is to curse — not to bless — many of the leaders parading to the podium.

My journey to the Paris summit emerged from three years of living with my family on Kibbutz Ketura, in the Arava Desert in southeastern Israel, and co-founding the solar industry in Israel (of which I still have a stake). I remember one night watching Al Gore’s “Inconvenient Truth” with Jordanian, Palestinian and Israeli students at the Arava Institute, on the kibbutz, and all of us realizing that climate change does not recognize borders, religion or nationality identity. It is an equal-opportunity killer.

Each world leader paid their respects to the French people in light of the recent terror wave. Jordan’s King Abdullah, among others, equated the war on terror with the climate battle. Both, he said, are epic challenges to humanity.

“I have set before you life and death, blessings and curses. You shall choose life, so that you and your offspring will live,” said God, in Deuteronomy 30:19.

There are two competing Israeli narratives for Paris, depending on one’s audience. There is the blessing of the Jewish state’s culture of innovation as the so-called “Start-up Nation.” Israel is the only country whose founding visionary, Theodor Herzl, predicted it would be powered by green energy. Israel’s founding prime minister, David Ben-Gurion, was a solar pioneer, imagining that the young country’s hot water would be heated with the sun. I am in Paris, in part, to wave the green Zionist flag.

READ: The Jewish imperative to tackle climate change — and four ways to do it

Yet my heart broke when the president of the Marshall Islands, the most loyal ally Israel has ever had at the United Nations and whose Pacific island nation sits barely 6 1/2 feet above a rising sea, pleaded for the world to move quickly to reduce carbon emissions before his people literally drown. Do I have the heart to tell him that only 2 percent of his beloved Israel’s power comes from renewables?

German Chancellor Angela Merkel announced that Germany will be at least 40 percent powered by renewables by 2030 and is already at a whopping 27 percent. Standing in the shadow of death, Germany is choosing life, while Start-up Nation, with double Germany’s sunlight, can only dream of reaching 17 percent renewables by 2030. Israel’s electric company, regulator, Finance Ministry and Energy Ministry all mistakenly declare that what Germany has achieved is actually not really possible. The truth is, Israel’s decision makers overwhelmingly are intoxicated with natural gas — as if somehow energy security is achieved by having 70 percent of your power dependent upon a gas pipe more than 90 miles deep in a war and fault zone.

And what of Jewish organizations? I know of not one Jewish endowment or foundation that has decided to divest from carbon, even as college funds, pensions, sovereign wealth funds and mainstream foundations are actively divesting trillions. Not even the Reform movement, the conscience of American Jewry, has made a decision to divest; we are light years behind our mainline Christian friends.

By the way, the Palestinian leadership is no better. Abbas blamed the Israelis for his lack of climate action. Yet it is mainly his own pen that refuses to sign solar licenses, rezoning requests and internationally bankable power purchase agreements with Palestinian solar entrepreneurs — condemning his people to ever-lasting dependence on dirty power from Israel.

And what of ISIS? I was probably the only schmuck at the conference this week lugging around my Israeli gas mask in my backpack, having heard the warnings of the French leadership that chemical and biological attacks may be possible. Don’t judge me; I have a wife and five kids, and, as an Israeli, own a gas mask. ISIS is the best-financed terror group in history because it sells oil. Iran is the best-financed terror state because it sells oil. Saudi Arabia is the biggest exporter of fundamentalist Wahhabi Islam because it sells oil. Oil is greasing the wheels of terror and somehow we grieve as if we are innocent.

Then there’s the Israeli prime minister, the one whose visionary fuel-alternative initiative promises a world without oil. Yet his government grants licenses for oil drilling in the Golan, killed the national network to charge electric cars and can’t even admit to an international climate audience that Israel is failing at home.

As part of the Israeli delegation, this is what I’m supposed to say: Israeli innovation and technology can save the world, and please forgive our low targets on renewables because we live in a tough neighborhood.

As a Jew, however, I must curse and provide hope. And here it is: Despite the Israeli government, the Arava region — stretching from Eilat to the Dead Sea — is now powered 60 percent from the sun during the day and will achieve 100 percent daytime power by 2020. This is the model for Israel:  daytime sun and nighttime natural gas. And this could be the model for the Palestinians, for our Arab neighbors, for Africa, for the world over, and could drive development and really fight climate change.

I only wish the prime minister said this and not me.

(Yosef I. Abramowitz serves as CEO of Energiya Global Capital, a Jerusalem-based solar and social development enterprise. He was named by CNN as one of the six leading Green Pioneers worldwide, and won a Covenant Award for Excellence in Jewish Education. He’s on Twitter at @KaptainSunshine.)