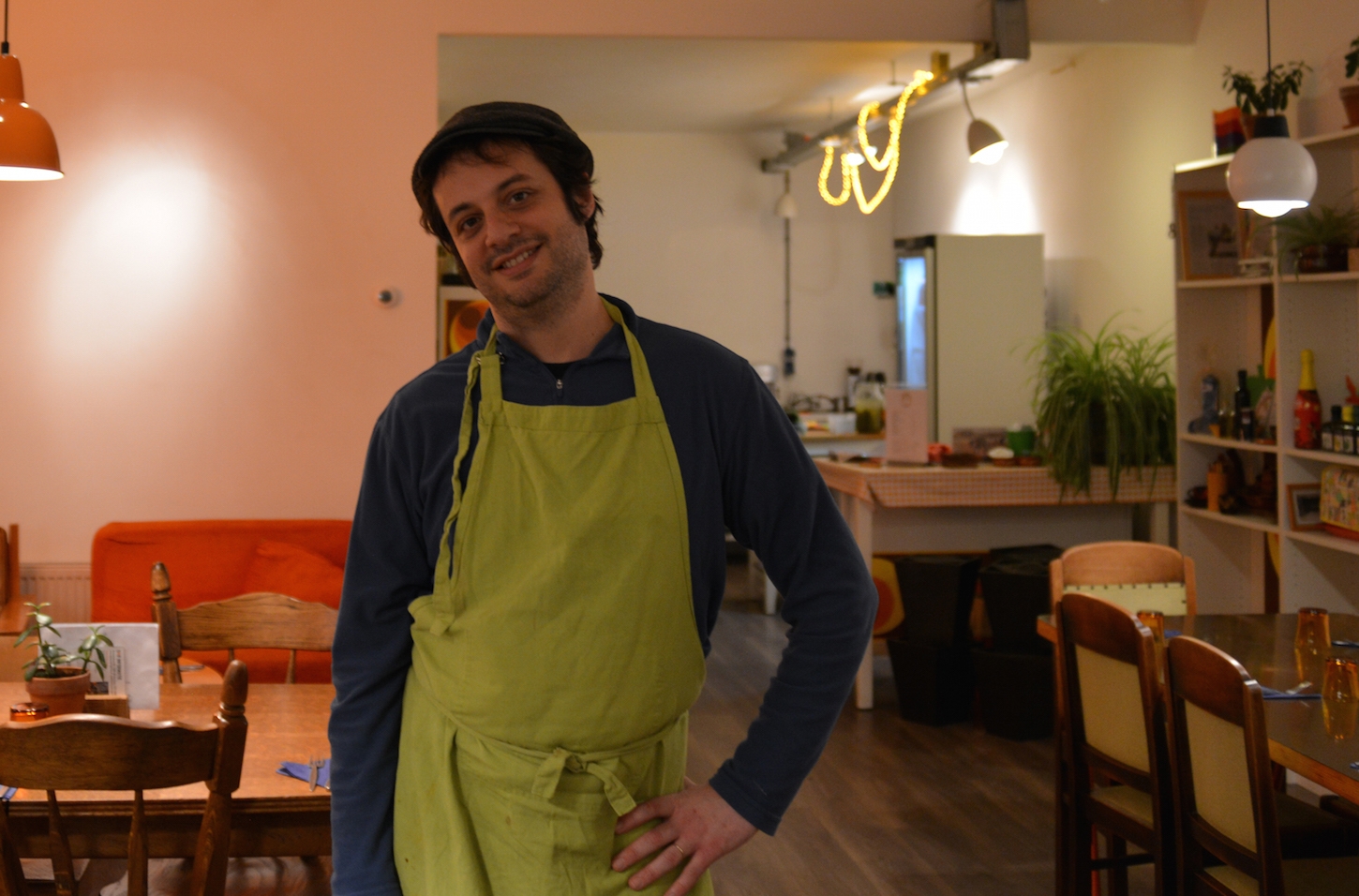 Yuval Gal in his hummus restaurant in The Hague. (Courtesy of Love & Peas)
Advertisement

THE HAGUE, Netherlands (JTA) — Like many Israelis in Europe, Yuval Gal and Muawi Shehadeh decided to market their hummus restaurant specifically to health-minded vegetarians.

A Jew from Tel Aviv and an Arab-Israeli from Nazareth, the duo this year began peddling their native country’s signature chickpea paste at an eatery in this city called Love & Peas, which Gal, 36, says specializes in “green, healthy foods.”

In this respect, Love & Peas is little different from dozens of Israeli-owned hummus joints that have sought in recent years to capitalize on Europe’s growing demand for exotic health foods. Many of these businesses feature Hebrew names, like Miznon in Paris and Pilpel in London.

But Love & Peas is no typical Israeli hummus bar. For one thing, its Israeli owners decline to identify their food as Israeli, describing it instead as “Palestinian green cuisine.” For another, their open endorsement of the Palestinian narrative has helped generate phenomenal media exposure in Holland and back home in Israel.

Since opening this summer, Love & Peas — which has eight tables, a 1970s retro design and a play corner for children — has been celebrated as a victory for coexistence by the Dutch media, with pieces about the eatery running on three television stations and in six major newspapers.

On its wall hangs a large map of Israeli territory labeled “Palestine.” (There used to be a doctored poster of Anwar Sadat and Menachem Begin stroking a curvy young woman, but it was taken down after patrons complained it was offensive.) Its falafel balls are made in the “Qudsi” style, a reference to Jerusalem’s Arabic name. And on a counter, a stack of fliers advertises the local branch of the Plant an Olive Tree initiative, a project of the Palestinian YMCA, which supports boycotting Israel.

“Hummus is Palestinian,” Gal said. “Let’s be honest with ourselves.”

Gal, a father of two who left Israel five years ago, says his restaurant has no anti-Israeli agenda and is open to anyone. He notes that Israel’s ambassador to the Netherlands, Haim Divon, dined at Love & Peas with his wife, Linda, shortly after its opening and praised it in an interview with the Israeli daily Yediot Acharonot.

But Gal concedes that he feels uneasy with being labeled an Israeli and was none too happy about the ambassador’s appearance. After the visit, in a bid to make their political views better known, Gal and Shehadeh hosted a benefit concert for the olive tree initiative, which plants trees in the West Bank and Gaza to support farmers who “suffer from the various Israeli policies that put their land and property under the threat of confiscation,” according to its website.

“This restaurant is an attempt to deal with this label, a therapeutic way of dealing with your identity,” Gal said, adding: “What’s important for me is not to whitewash the occupation.”

READ: Israeli hummus restaurant gives Jews and Arabs 50% off for eating together

Love & Peas sells no foods originating from Israel – a policy Gal declined to confirm was an ideological one. He also said Israel was not a real democracy and that leaving felt as though he was being exiled for his views.

Shehadeh, whose father is Muslim and mother is Dutch, says the restaurant is interested in “solving, not complicating, the conflict.” The media interest in the restaurant’s political dimension was “totally unexpected,” according to Gal, and not part of any strategy.

Nevertheless, six months after its launch, Love & Peas is the best-known hummus restaurant in the Netherlands and a huge financial success.

“We surpassed all the projections of our business plan,” Gal said.

Gal and Shehadeh met several years ago at a bar. Shehadeh does the accounting while Gal is in charge of the cooking, in what the duo concedes is a reversal of stereotypical roles.

“Now I’m the Jew with the money and he’s the Palestinian doing the cooking,” Shehadeh told the Omroep West broadcaster last month.

“It’s only true in the jokes,” Gal added about the stereotypes. “I can’t count, can’t bill clients.”

Divon said he regretted the restaurant’s political orientation, which he said was “misguided and unfortunate.” But no matter how the restaurant is packaged, “it serves to underline the actual reality on the ground in Israel, where Jews and Arabs interact on personal and economic levels, where they co-own and jointly operate businesses, till they often gravitate to doing so also abroad.”

Where Divon grew critical was when it came to Love & Peas’ signature dish, a subject that many Israelis take very seriously. In Israel, Divon’s hummus place of choice is in Abu Ghosh, an Arab suburb of Jerusalem.

“I remember the olive oil was great,” Divon said of Love & Peas. “The hummus, well, it was OK. But nothing compares to our hummus back home in Israel.”