7 things Miriam Adelson does — besides back GOP candidates 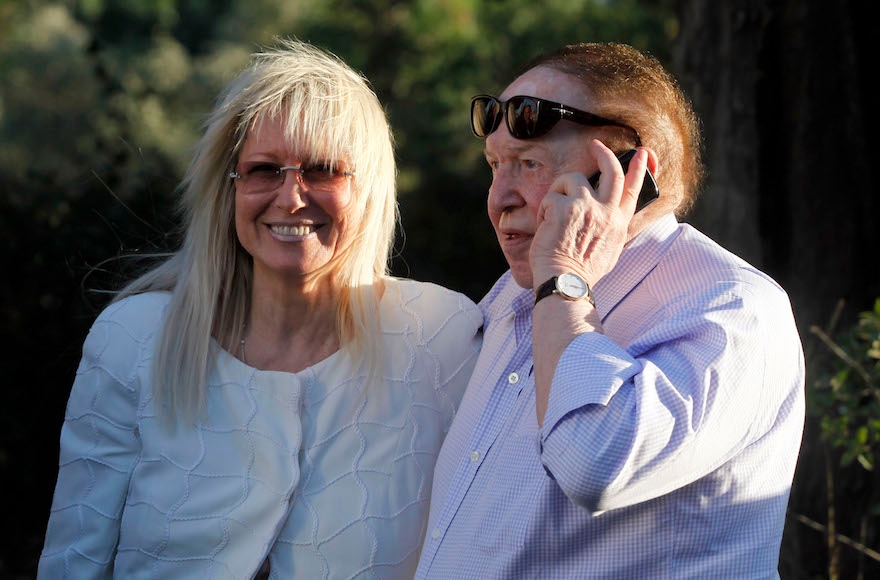 (JTA) — Miriam Adelson and her husband, Sheldon, reportedly are at odds over which Republican presidential candidate deserves backing.

But this isn’t a typical marital spat — it’s about which candidate most deserves to be showered with their money. Miriam Adelson, an Israeli-born physician, favors Sen. Ted Cruz, R-Texas, while casino magnate Sheldon Adelson likes Sen. Marco Rubio, R-Fla., according to a report on Yahoo!

How much exactly is at stake in this domestic dispute? Tens of millions of dollars in campaign funding, if recent history is any indication.

The Adelsons are among the party’s most generous and, therefore, sought-after donors to GOP presidential candidates. (Sheldon Adelson’s Venetian casino hosted the Dec. 15 Republican presidential debate.) They gave $20 million to Newt Gingrich during the 2012 primaries, then sank $30 million into Mitt Romney’s failed bid to defeat incumbent Barack Obama in the general election.

But in addition to being a doctor and one-half of a Republican power couple, who exactly is Miriam Adelson? According to a 2012 story in the Forward, she is a mother of four: two grown daughters with her former husband, physician Ariel Ochshorn, and two sons with her current husband, whom she met on a blind date in 1988.

Here are six more revealing facts about the first lady of the Las Vegas Strip.

1. She finds inspiration in unexpected places.

Adelson, 69, who founded clinics that research and treat drug addiction in Israel and the United States, roots her interest in the issue in her encounters with prostitutes.

“I became connected to drug addiction while working with women who had become prostitutes to support their addiction,” she told Jewish Business News last year. “I began to wonder, ‘How does a woman from a good family begin to sell her body?’ It always bothered me. There is something more than bad behavior there.”

2. She believes attacks on her and her husband presage the collapse of democracy.

During the 2012 election, the National Jewish Democratic Council, in a news release, linked to a story by The Associated Press that included an account of a legal document alleging that Sheldon Adelson allowed prostitutes to ply their trade in his Macau properties. The couple’s philanthropy assisting addicts (including prostitutes — see above) fueled their fury and Adelson sued the NJDC. The suit was dismissed but Adelson appealed; the case is still in the courts.

In a Daily Caller Op-Ed in 2012, Miriam Adelson alluded to the prostitution report and argued, with the sweep of epic poetry, that it was part of a campaign by the White House to silence its Republican critics. She wrote:

“Those who currently chase after my family, who demonize us for our political positions, are acting on motives contrary to American values. And those in the media who are collaborating with these people are also acting from the same wrong political motives. Indeed, they are feeding it with a media double standard — allowing for Democrats what is forbidden to Republicans.

“The reason is simple: to help the Democrats keep control of the executive branch of the government.

“But the United States is not a third-world country.

“The United States is not a dictatorship.

“The United States is not a dark country.

“The United States is not a socialist country.”

3. She gets verklempt when she talks about Israel-U.S. ties.

The Adelsons fund the Adelson Educational Campus in Las Vegas; the Israeli and American flags fly side by side there, she told Hadassah Magazine a year ago.

“Sometimes, she confesses, she goes in specifically to hear the kids sing [Israel’s national anthem] ‘Hatikvah,’ pointing out that they also recite the Pledge of Allegiance,” according to the Hadassah piece. “‘Each time I have tears in my eyes,’ she says, her Israeli accent and speech cadence still strong.”

4. But she’s also hands-on in tackling the Israeli-American dilemma.

The Israeli American Council’s expansion in recent years is thanks largely to the Adelsons’ largesse. Some media have depicted the Adelsons’ support as a means of punishing the American Israel Public Affairs Committee for its 2007 contretemps with the couple over the prominent pro-Israel lobby backing increased funding for the Palestinians. (AIPAC’s policy has since reversed.)

I’ve attended IAC’s annual conference two years in a row, and what I’ve found is not an exercise in spite or vanity but an organization on the front lines tackling a unique dilemma: How do transplanted Israelis assimilate into a Jewish culture they long to join but also find alienating?

Adelson is deeply involved in helping to shape the conference. I saw her join panels conducted in both Hebrew and English and get into the nitty-gritty of involving Israelis in American Jewish life.

5. One reason she likes Birthright: babies!

The Adelsons are major funders of the Birthright Israel program, which provides free Israel tours for Jews aged 18-26. Here’s why, according to a 2013 account in Israel National News of the 13th anniversary celebration of the program:

“Miriam Adelson said that the Jewish people was facing a demographic crisis, with a 42% intermarriage rate. However, she added, among Birthright graduates, more than three out of four married Jews. The solution to the crisis, she said, was for more Jews like those in the audience to establish Jewish families and grow the number of Jews. ‘How do we increase the number of Jews? I say by having more babies,’ she said.”

6. In addition to prostitutes, she’d like to help another overlooked demographic: celebrities in distress.

In the same interview with Jewish Business News, Adelson said she was moved by the death of Philip Seymour Hoffman. She said she’s ready to help celebrities overcome their addictions, even if it means figuring out ways to do it on the QT.

“I would be willing to be as flexible as possible to arrange for each of them a convenient, confidential plan of treatment … I was so frustrated after the death of Philip Seymour Hoffman, this incredible movie star that everyone liked so much, and I said to myself, ‘My God! I am helping the poor and the homeless,” she said in Jewish Business News.

“Why can’t I also do something for the celebrities? Maybe some of their agents will call me and I can educate them. My clinic is not-for-profit. I am not here to make money; I am here to save lives. Everything here is confidential. So maybe I can consult them and guide them to a safe place where they can still be great, functional movie stars and survive and all of us can continue to be inspired by their talent.”

7. She’s a key decision maker when it comes to how the money’s spent.

Adelson weighs in on all major decisions about whom or what to fund. According to Buzzfeed: “Sheldon speaks of a ’24-hour rule’ where he won’t commit to funding anything until he’s spoken to Miriam and slept on it,” the article says, paraphrasing a “family friend.” “She is involved in his meetings, and isn’t shy about gently correcting him or jumping in.”