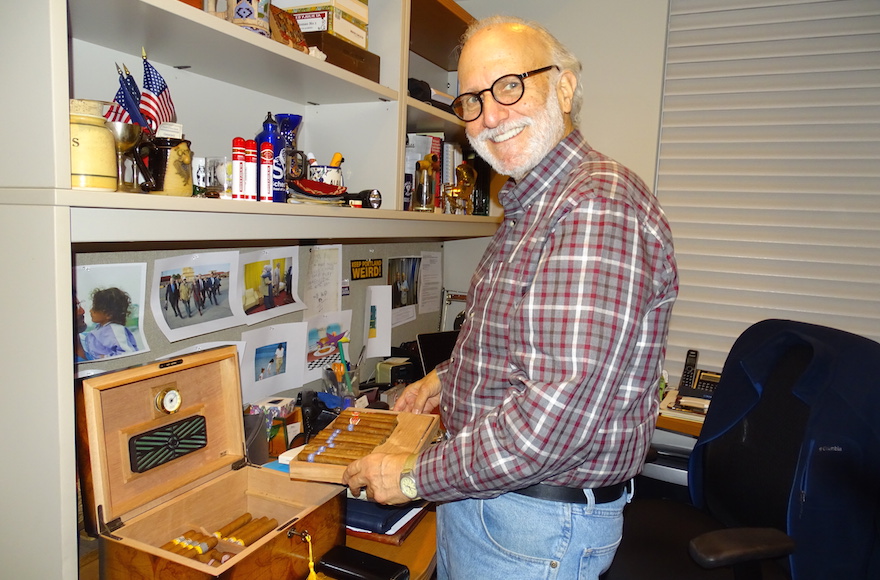 (Washington Jewish Week via JTA) – Since being imprisoned in Cuba six years ago, Alan Gross says his life has been “surreal.”

He feels disassociated from the causes of his five-year incarceration and from the resulting fame. He was locked up largely because of U.S.-Cuba relations, he says, and he is a public figure thanks to the people who followed his story in the news or advocated on his behalf.

“It never was about me,” Gross said in an interview in his Washington, D.C., condominium. “My life became surreal the night I became detained, and it still is today. I don’t quite understand the celebrity function.”

That doesn’t mean he isn’t grateful to the people who signed petitions or gave media interviews demanding his release. Gross credits them with bringing him back to the United States, via Andrews Air Force Base, on Dec. 17, 2014.

When he was arrested in 2009, Gross was working as a U.S. government subcontractor setting up Internet access for Cuban Jews.

“It is illegal to distribute anything in Cuba that is funded in full or in part by the U.S. government. That’s why they detained me initially,” he said, insisting that his Jewish background or work had nothing to do with it.

Gross says once the Cuban government realized he could be used as a bargaining chip in its diplomacy with the U.S., he was stuck. While he wasn’t physically tortured, he suffered in other ways.

“They threatened to hang me, pull out my fingernails,” he said. “They told me I would never see the light of day.”

READ: On 1st anniversary of his release, Alan Gross calls for warmer ties with Cuba

Gross stayed busy by walking around the cell he was locked in 23 hours a day, drawing pictures and creating word puzzles. During his incarceration, he said, he often recalled a scene from the television show “M*A*S*H” in which one character taunts another, who was confined to his tent as a punishment, by stepping in and out of the tent.

“I thought about that almost every day, the ability to step in and out,” Gross said. “The freedom, that’s what I missed every day. Freedom is an incredible thing to lose.”

For the first several months, Gross wasn’t allowed reading materials. Later, visitors brought newspapers and his family sent books and the Economist magazine. He rarely saw fresh fruits and vegetables, eating a lot of chicken and rice – as well as potatoes, yucca and malanga. Due to poor nutrition, he lost several front teeth, which he keeps in a small container in his office.

“I think I lost about 70 pounds the first year, and the next three years, another 40 pounds,” Gross said.

For the first 3 1/2 years in jail, he didn’t know people were working for his release. He was amazed to learn of the Washington Jewish community’s weekly vigils for him during a visit from his wife and attorney.

When he was finally given access to a phone, Gross called Ron Halber, executive director of the Jewish Community Relations Council of Greater Washington. They didn’t know each other. But Gross was desperate, and Halber was willing to help.

READ: Alan Gross: Memory of Holocaust survivor relatives got me through Cuban prison

Gross let it be known that he was in failing health, emotionally despondent and unwilling to see anyone but his wife. He went on a nine-day hunger strike in April 2014, which he said alarmed the Cubans. But it was a ploy, he reveals.

“I wanted to turn the heat up. I was never despondent. I never wanted to take my life,” he said.

Soon after his release, Gross met supporters at a homecoming party at Temple Beth Ami in Rockville, Maryland. He described the evening as “very confusing.” When a young man came up and asked to take a selfie with him, Gross had no idea what he was talking about. He has since had selfies explained to him.

Now that the celebrations have dwindled, Gross says he does a lot of “walking, thanking people and smoking Cuban cigars.” No longer confined to a cell, he walks for miles, often around his neighborhood near the National Zoo. He also likes to play his collection of 10 mandolins and is excitedly awaiting the birth of his first grandchild.

Gross misses his work on behalf of the U.S. Agency for International Development, which took him around the globe, including to Israel, the West Bank and the Gaza Strip. He’s happy to tell the stories behind the colorful weavings, tribal masks and other world art covering the walls of his home. But he’s afraid to leave America again.

Despite his ordeal in the Communist island nation, Gross still has special affection for the Cuban people, including the Jews he tried to serve, whose numbers he says have dwindled to about 1,000.

Recalling the largest synagogue, in Vedado, a Havana suburb, Gross said, “It’s just like many Jewish community centers around the world.” He says Shabbat dinners are well attended, partly because the meals supplement the little food people have.

Gross is working on a book about his experience in Cuban prison. The working title: “It was never about me.”