‘Broad City’ renewed for 2 seasons, ‘Inside Amy Schumer’ for 1 “Broad City,” written and acted by Ilana Glazer and Abbi Jacobson, was given the very rare green light for two subsequent seasons. The third season premieres on Feb. 17.

“Inside Amy Schumer,” which stars it eponymous creator, was renewed for the customary one season. The fourth season will debut later this year. 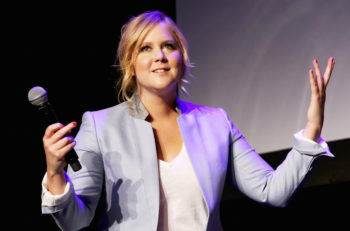 Amy Schumer speaking about her film “Trainwreck” at the 2015 Tribeca Film Festival on April 19, 2015, in New York. (Robin Marchant/Getty Images)

Comedy Central also OK’d what could be Glazer’s most mind-bending project yet: a three-part mini-series called “Time Traveling Bong.”

The rising comedy stars took to Twitter to celebrate. Glazer exclaimed that she had some “job security” and Schumer took the opportunity to presumably mock Ben Affleck.

IAS season 5 got picked up! And my boyfriend and I got engaged and married and had a baby and he cheated on me with the nanny! Entertainment

To get in on the celebration, check out some of our favorite recent moments involving the three Jewish comedy queens.