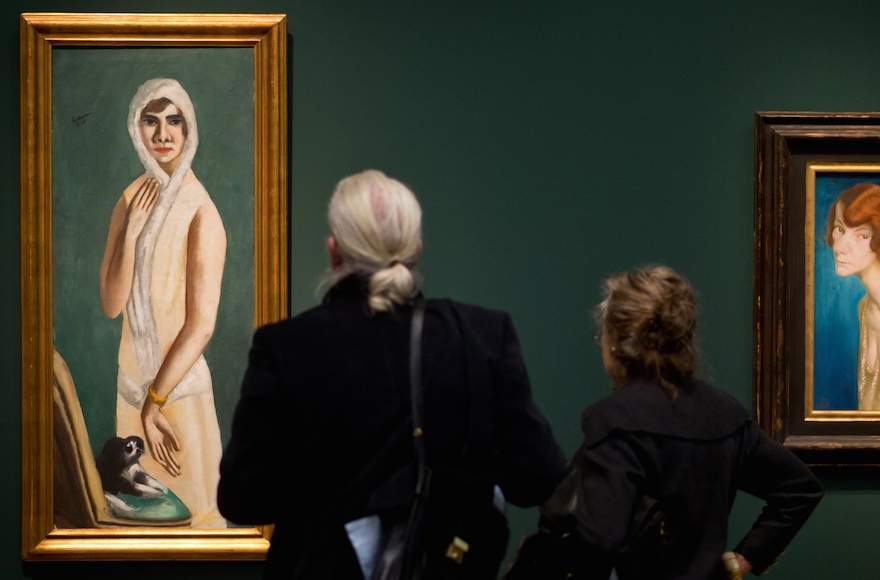 (JTA) — In a letter emblazoned with the insignia of the U.S. House of Representatives, 29 members of Congress reprimanded the German state of Bavaria for neglecting its historical responsibility to victims of the Nazis.

“The Free State of Bavaria has yet to fully honor its pledge regarding restitution or compensation for Holocaust-related confiscations of property, including artwork, made under duress,” read the Nov. 9 letter addressed to Bavaria’s governor, Horst Seehofer. “The importance of these issues to Holocaust survivors and their families cannot be overstated.”

Why would members of Congress send such a sharply worded – if diplomatic – missive to the largest state in Germany, a major U.S. ally, some 70 years after the end of World War II?

In the preceding months, retired American-British physician Michael Hulton, 69, had met with Congress members throughout the United States to deliver an impassioned presentation about his great-uncle Alfred Flechtheim, a flamboyant German Jewish art dealer destroyed by the rise of the Nazis. 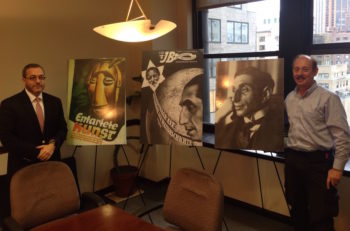 Michael Hulton, right, with attorney Mel Urbach in New York, has gone to Congress in his bid for the restitution of Nazi-looted art.  (Jas Chana)

German institutions, Hulton told the lawmakers, are failing in their responsibility to secure justice for Flechtheim and other early victims of the Nazis. He asked for their help.

In an interview at his lawyer’s Manhattan law firm, Hulton told JTA he was heartened by how receptive the lawmakers were to his message.

“And not the obvious ones,” he said. “Not the Jewish ones.”

Germany is widely acknowledged to be a leader in Holocaust restitution. The state has paid nearly $70 billion to Nazi victims since 1953, according to Wesley Fisher, director of the Conference on Jewish Material Claims Against Germany.

And although any statutes of limitation long ago expired on cases of Nazi-looted art, Germany is among 44 nations that voluntarily committed in the Washington Principles of 1998 to restitution of art stolen by the Nazis or sold under duress they caused.

But Hulton said Germany has not fulfilled its commitments under the agreement, not to mention its historical obligations. He noted that state authorities set the bar very high for claimants of restitution — requiring them to prove that Nazi oppression directly contributed to the loss of the art in question.

That can be difficult, especially where records are lacking.

For example, early in 2015, the Limbach Commission – a state-established panel that advises on requests for restitution for art lost due to Nazi oppression — rejected a claim on “A Weekday in Paris,” a painting by German artist Adolph von Menzel. The heirs of the artwork’s one-time owner, George Behrens, argued that the Jewish banker sold the work to the city of Dusseldorf in 1935 because of Nazi persecution.

The commission pointed out that Behrens was paid 30,000 Reichmarks for the painting, which was in line with the market price of the day. Further, the commission said, the bank Behrens owned was still in good economic order in 1935, suggesting he was not in financial duress.

But it’s worth remembering the pervasiveness of Nazi influence, even when it cannot be pinpointed.

“One should ask: Why did Behrens sell?” said Marc Masurovsky, an art historian and co-founder of the Holocaust Art Restitution Project. “If it was to finance his exit from Germany, then we are within the reach of a forced sale. If it was to pay for lunches and dinner, clearly not.”

Flechtheim probably wasn’t eating out much by 1932, when he is said to have sold the most valuable works in his collection: six paintings by the famed German Expressionist Max Beckmann.

After a roaring 1920s spent hobnobbing with artistic elites from Paris to Berlin, Flechtheim that year became the literal cover boy for the “Jewish problem.” A sketch of his face in profile was published on the cover of the Nazi magazine Illustrierter Beobachter alongside the headline “The Race Question is the Key to World History.”

The persecution worsened from there, with the Nazis breaking up a 1933 auction he was participating in. Later that year, Flechtheim fled Germany. He died in London in 1937, destitute and miserable.

In 2008, using photographs of the art in Flechtheim’s Berlin apartment, Hulton began claiming as his inheritance 17 paintings and other works that were once in Flechtheim’s collection – including pieces by Beckmann, Pablo Picasso and Paul Klee. German museums now own the works. Hulton and his lawyers value the estate at some $124 million.

Since then, Hulton has settled claims with only two museums regarding eight of the works. On the Beckmann paintings held by Munich’s Pinakothek der Moderne, the state-owned museum has been uncooperative and will no longer even discuss the matter, he said.

Pinakothek der Moderne did not respond to requests by JTA for comment.

It was frustration with the museum that led Hulton to seek help from Congress members. But another letter may turn out to be more decisive in his campaign for justice.

Pinakothek der Moderne contends that Flechtheim sold the Beckmann paintings to an art dealer in New York in 1932. When Flechtheim was later offered a fraction of the agreed sum, he responded with a letter protesting in French: “Tant pis!”

Whether Flechtheim was turning down a sale that had not yet happened or regretting a sale he had already agreed on is up for debate. But the meaning of his protest is not: “The situation is regrettable!”