4 times Obama and Netanyahu got along that ‘Frontline’ skipped 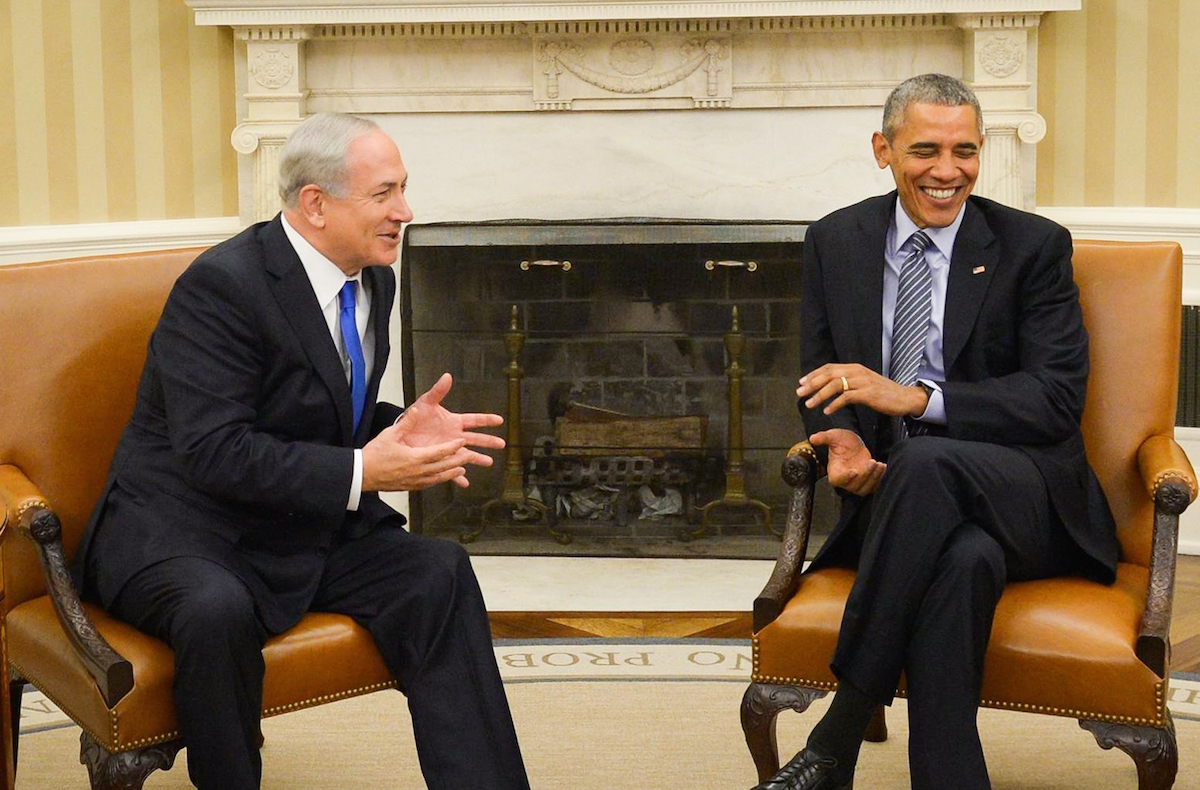 PBS’ “Frontline” aired “Netanyahu at War” last night, and there’s a lot of social media buzz about the nearly 2-hour documentary, which chronicles Israeli Prime Minister Benjamin Netanyahu’s career and then veers into his relationship with President Barack Obama.

Allow me a mixed-generation metaphor — boomers and millennials — for my takeaway: The film casts the Obama-Netanyahu relationship as a Wile E. Coyote vs. Roadrunner story, told in the style of VH1’s classic series “Behind the Music” (dramatic angles, swelling ominous music and then the big breakup).

Look, there’s no denying these two men are less than bosom buddies, but “Frontline” extracted conflict from a relationship that is more nuanced. The documentary rendered each man as a caricature of vindictive, irrational behavior.

I’ve been covering their relationship from the get-go, and yes, there are quirks to how they deal with each other, but each leader for the most part acts according to his perception of his nation’s interests.

Here are four examples of how Obama and Netanyahu went out of their way to advance the U.S.-Israel relationship — which “Frontline” ignored or skated over.

“Netanyahu at War,” directed by famed political documentarian Michael Kirk, makes much of Netanyahu’s anger with the new Obama administration’s focus in 2009 on stopping settlement expansion. The film casts the administration’s insistence on the freeze as something the prime minister could not countenance.

Yet he did countenance such a halt, in 2010, freezing settlement building for 10 months in a bid to restart peace talks with the Palestinians. And in 2013, in the Obama administration’s second pass at Israeli-Palestinian peacemaking, Netanyahu agreed to release 100 or so Palestinian prisoners who had been involved in fatal attacks on Israelis.

There have been 20-20-hindsight arguments that the 2010 freeze didn’t go far enough, and that Netanyahu should have opted for another freeze in 2013 instead of the prisoner releases. But both moves cost him political capital — a price that underscored his seriousness in accommodating the Obama administration’s peace efforts.

READ: Disagreements behind them, Obama and Netanyahu get down to business

2. The Stuxnet virus used against Iran

Much of the documentary focuses on recent tensions over Iran, and the secrecy and mistrust that surrounded the Obama-Netanyahu relationship ahead of the Iran nuclear deal.

Yet Israeli and U.S. officials will tell you on the record, on background, off the record, in every forum I’ve encountered them, that the intelligence relationship has never been more robust, particularly regarding Iran.

The best known example, which does not merit a mention on “Frontline,” is Stuxnet, the computer virus developed through cooperation between the countries’ intelligence agencies that in 2010 disrupted Iran’s uranium enrichment enterprise.

By all accounts, the cooperation continues. Allies often spy on one another while otherwise sharing sensitive information and cooperating on spying ventures.

Much is made on “Frontline” of Obama’s failure in 2009 to fly 45 minutes to Tel Aviv after his address to the world’s Muslims in Cairo. Members of his team now acknowledge that it was a mistake and that it contributed to Israeli suspicions about his regard for the country.

Not mentioned is Obama’s 2013 tour of Israel, which was tailored to address some of the specific Israeli misgivings about the 2009 speech, for instance, by including a visit to Theodor Herzl’s grave to underscore Obama’s understanding of Zionism as a legitimate national movement and not just a response to the Holocaust.

“Frontline” understandably focuses on the tensions between the leaders in the year leading up to the Iran nuclear deal. The film frames Netanyahu’s inability to stop the deal as his signature failure, one that will haunt the historical account of his leadership.

Missing, however, is the aftermath. Netanyahu and Obama had what was by all accounts a productive meeting in November about cooperation in the wake of the Iran deal. I was among the reporters who met with Netanyahu immediately following the summit, and he was genuinely relaxed and happy — elated even.

Deeming Netanyahu’s lobbying against the deal a failure is premature. He didn’t stop it, but his opposition helped to shape it. The Obama administration is aggressively tracking entities busting Iran sanctions not related to the nuclear deal, in no small measure out of deference to Netanyahu’s concerns that the deal emboldens Iranian influence in the region.

“The conversation was substantive, practical,” Netanyahu told reporters after the meeting. “We have a common interest in keeping Iran from violating the agreement.”

There are other times too when the documentary picks up on established — if erroneous — accounts of recent history that bolster the narrative of Obama-Netanyahu enmity.

— I’ve never bought into the narrative that Netanyahu’s meeting in Israel in 2012 with Republican presidential candidate Mitt Romney was in itself an endorsement of his campaign. Then-Prime Minister Ehud Olmert met with Obama in 2008 and was not tarred as a Democratic shill for it. (Netanyahu’s press conference in September that same year lambasting Obama’s Iran policies is another matter.)

— “Frontline” echoes the prevalent account of Obama’s 2011 Middle East policy speech, focusing on his mention of Israel’s pre-1967 borders as a basis for negotiations with the Palestinians, which infuriated Netanyahu. The speech included a full slate of proposals, including the first time an American president officially embraced the notion of a demilitarized Palestinian state as an outcome of a final status agreement. Those elements led two major pro-Israel organizations to praise the speech at the time.

— Casting Obama as responsible for the ouster in 2011 of Egyptian President Hosni Mubarak, abandoned by his own military in the face of raging street protests, is a manifestation of an unfortunate Washington monomania, which posits that the United States is able by itself to determine outcomes in other countries.

— Lisa Goldman at left-wing Israeli 972 Magazine counts the women interviewed — four — and the men — 23. This is a shanda on its face — there is an abundance of women able to speak both to Netanyahu’s career and to the U.S.-Israel relationship.

The absence of women contributes to the documentary’s lack of nuance. Israeli politician Tsipi Livni — a scion of the same “fighting family” of pre-state insurrectionists as Netanyahu, who has clashed with the prime minister repeatedly in recent years — is barely used, and when she speaks it is mostly about Obama. Missing altogether is Madeleine Albright, the secretary of state whose cultivation of then-Defense Minister Yitzhak Mordechai was key to checkmating Netanyahu during the 1998 Wye River talks.

Hillary Rodham Clinton, on the campaign trail, may have been unavailable for interviews, but she’s spoken often in public about Netanyahu since leaving her job as secretary of state in 2013, and those clips would have been available.