Why the Jewish Federations don’t talk about guns 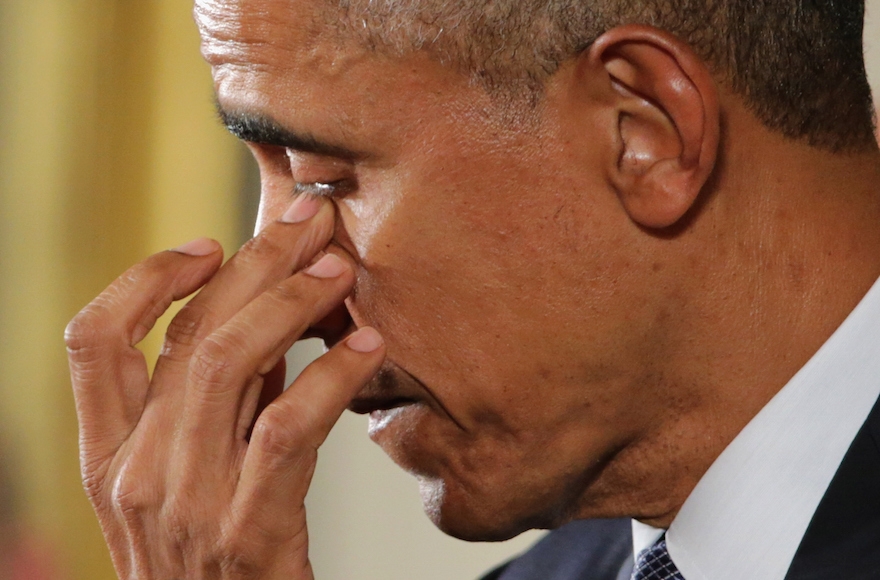 President Barack Obama wiping away tears as he talks about the victims of the 2012 Sandy Hook Elementary School shooting and about his efforts to increase federal gun control in the East Room of the White House in Washington, D.C., Jan. 5, 2016. (Chip Somodevilla/Getty Images)
Advertisement

Several Jewish groups on Tuesday came out singing the praises of President Barack Obama’s initiatives against gun violence. (The Anti-Defamation League too.)

On Wednesday, the Jewish Federations of North America joined the chorus — but it only hit a single note. And that note was mental health, not guns.

“Jewish Federations applaud the Obama administration for allocating $500 million to increase access to mental health care. Approximately one in five adults suffer from mental illness in the United States and nearly 60% of those have not received health care services in the past year. We praise President Obama for taking this vital step to help those in need,” the Jewish umbrella group’s statement read in full.

Yes, increasing access to mental health care is a component of the executive actions Obama announced Tuesday — but the real issue is of course gun control. Speaking to the press from the White House, the president shed tears as he recalled the first-graders massacred in 2012 in Newtown, Connecticut. Victims of gun violence stood behind him.

READ: Ahead of the G.A., what do Jewish federations actually do?

The group’s statement is like the travel agents lobby praising Obama for creating new opportunities for travel without mentioning that its because of renewed ties with Cuba. As JFNA knows, the $500 million allocation it applauds is likely to be earmarked for prevention of mental illnesses specifically linked to acts of gun violence — through domestic violence and suicide, for instance.

So why would the JFNA not mention guns? (Its affiliated public policy body, the Jewish Council for Public Affairs, was among the groups to come out in support of Obama’s announcement.)

“It [mental health funding] is an issue Jewish Federations has/have advocated on for years and a consensus one among Federations,” the group wrote in response to an email inquiry from JTA.

In other words, mental health is a federations cause; the highly partisan issue of gun control is not.