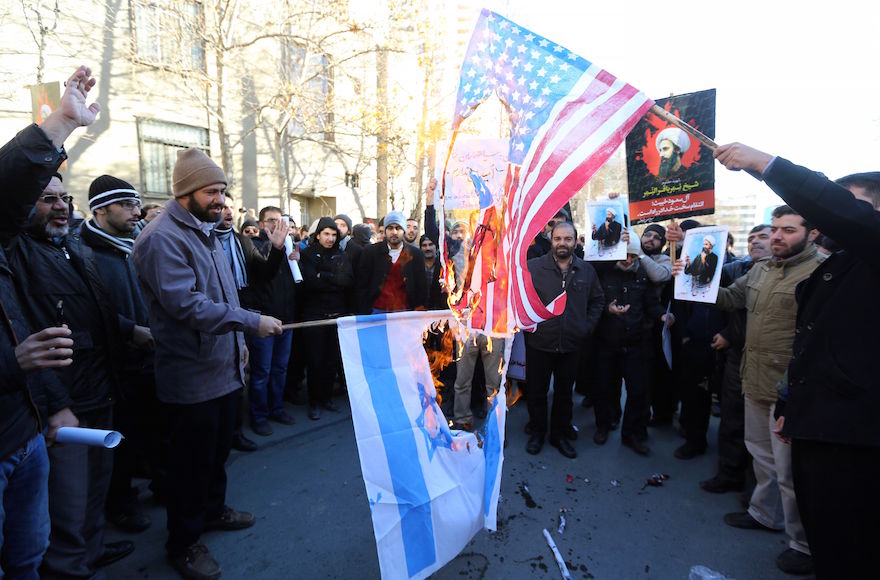 WASHINGTON (JTA) — Just months after the conclusion of a nuclear deal with Iran that the Obama administration hoped would help defuse a volatile region, the Middle East seems ready to spiral out of control.

Protests have erupted across the region this week in the wake of Saudi Arabia’s execution of a leading Shia cleric. In response, rioters torched the Saudi Embassy in Tehran, prompting Saudi Arabia and a handful of Gulf states to break diplomatic ties. On Thursday, Iran accused Saudi Arabia of bombing its embassy in Yemen, though the New York Times reported that the bomb fell on a nearby building.

The rivalry between the nations goes back decades, if not centuries, and the nuclear deal reached with Iran last year is, at best, one of many factors driving the recent conflagration. But the emerging consensus among Middle East hands is that any hope that the nuclear deal would tamp down tensions in the region and enhance stability is quickly evaporating.

“The Iranians were going to look for opportunities to demonstrate to their own constituents they are not cowed and contained,” said Tamara Cofman Wittes, a senior State Department official during Obama’s first term and now the director of the Center for Middle East Policy at the Brookings Institution. “They were going to look for ways to make that point to the rest of the world and to their competitors.”

The latest tensions date to Jan. 2, when Saudi Arabia executed Nimr al-Nimr, a leading Shia cleric, along with 47 other opponents of the regime, most of them Sunni extremists. The move prompted outrage in Iran, where rioters overran the Saudi embassy, prompting the Gulf monarchy to withdraw its ambassador. Several other smaller Gulf nations followed suit.

The tensions between Sunni Saudi Arabia and Shiite Iran are the modern manifestations of a schism that dates nearly to the dawn of Islam. But critics of the Obama administration also see them as the product of a larger pattern of assertiveness by Iran enabled by the nuclear deal reached over the summer.

In December, Iran fired rockets that passed within 1,500 yards of an American aircraft carrier in the Straits of Hormuz, an act described as “highly provocative” by the U.S. military. In October, Iran tested a ballistic missile capable of carrying nuclear warheads, in contravention of Security Council resolutions. In Syria, Iran continues to prop up the embattled Assad regime.

“The nuclear deal has emboldened Iran to become an even more malign force in the Middle East,” said Mark Dubowitz, the director of the Foundation for the Defense of Democracies, a hawkish think tank that has consulted with Congress in shaping Iran sanctions. “Multiple UN sanctions-violating missile tests, the trashing of the Saudi embassy in Tehran, continued military support for Assad’s killing machine [in Syria] and the Houthi insurgents in Yemen, and a sharp increase in executions of its own citizens.”

U.S. lawmakers from both parties have introduced an array of bills in recent days to punish Iran for the missile tests. Some of the top Jewish Democrats in Congress – Rep. Debbie Wasserman Schultz, D-Fla., the chairwoman of the Democratic National Committee; Rep. Eliot Engel, D-N.Y., the ranking Democrat on the U.S. House of Representatives Foreign Affairs and Rep. Nita Lowey, D-N.Y., the ranking Democrat on the Appropriations Committee — were among seven signatories to a letter to Obama urging him to reintroduce sanctions against Iran.

“We understand the administration is preparing sanctions against individuals and entities involved in Iran’s ballistic missile program, and we urge you to announce such sanctions without further delay,” said the letter.

The Obama administration has not counted out new sanctions, but prefers for now to pressure Iran through the United Nations. Existing sanctions against Iran are due to be eased in the coming weeks under the terms of the nuclear deal. On Thursday, U.S. Secretary of State John Kerry said Iran was “days away” from complying with its obligations under the deal.

The Saudis, meanwhile, are feeling skittish, buffeted by falling oil prices and America’s determination to reach an accord with its arch rival.

“The Saudis had been concerned about the United States and the Middle East for a long time, and they’ve become worse under Obama,” said Danielle Pletka, the vice president of the conservative American Enterprise Institute, noting Obama’s withdrawal of U.S. troops from Iraq in 2011 and his “very, very aggressive rapprochement with Iran.”

Writing on his blog this week, Alon Ben-Meir, a fellow at New York University’s Center for Global Affairs, said U.S. Secretary of State John Kerry should fly to Riyadh to reassure the Saudis of the American commitment to its security.

“His visit would allay the Gulf states’ concerns that the U.S. is being more critical of Saudi Arabia than Iran, a perception that could further reduce U.S. influence, especially in Riyadh when it is needed the most,” Ben-Meir wrote.