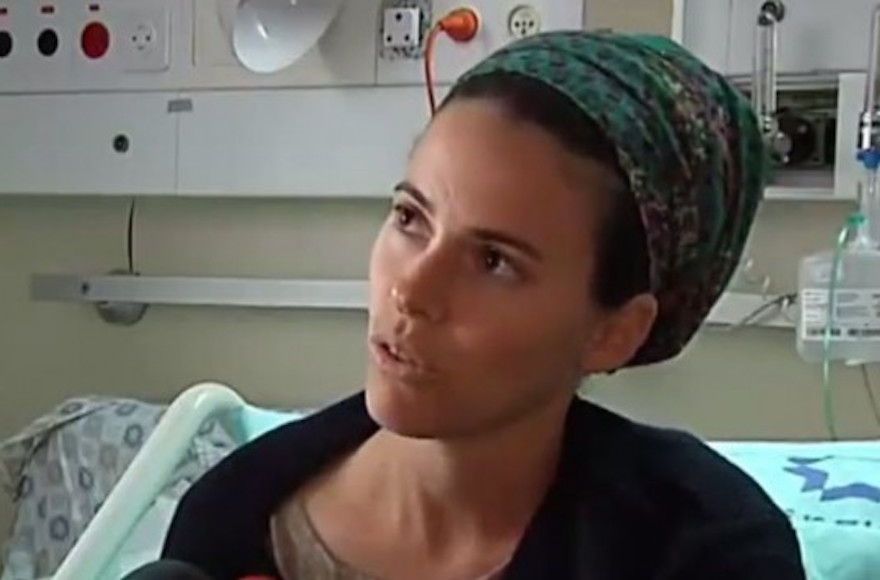 Michal Froman speaking from her hospital bed a day after she was stabbed at her home settlement of Tekoa in the West Bank, Jan. 19, 2016. (Channel 2 screenshot)
Advertisement

JERUSALEM (JTA) — The pregnant woman stabbed by a Palestinian teenager at a clothing store in the Tekoa settlement said she does not think her attacker planned to kill her.

Michal Froman told Army Radio that “there was no one to struggle with” her attacker.

“I saw his eyes, his confusion,” she said. “He didn’t have a scary face; he was a youth with a baby face. I didn’t want to really believe he was a terrorist.”

Froman’s lung was punctured in the attack but her 18-week-old fetus reportedly is fine.

She added that the teen could easily have killed her if he kept stabbing, but he stabbed her once in the back and ran away.

“To be stabbed with a knife from up close is something very personal, and I wondered what he went through, why he’s doing it, what does he want to get out of it? To be one of the martyrs? To be part of something? I don’t know,” she said. “I didn’t wonder why he didn’t kill me because it very much seemed to me that he came to stab and escape, to achieve some purpose that was not to kill me. I don’t know what his story was.”

Froman added: “Even when I saw the knife, I still didn’t believe that he was really coming to stab.”

After attempting to flee the scene, the assailant was shot by a Tekoa resident, according to the Israel Defense Forces. He is in serious condition at an Israeli hospital.

On Sunday, another West Bank woman, Dafna Meir, was stabbed to death by an assailant who broke into her home in the Otniel settlement. Three of her six children witnessed the attack.