David Blatt’s future: Brooklyn and 5 other teams where the ex-Cavs coach could land 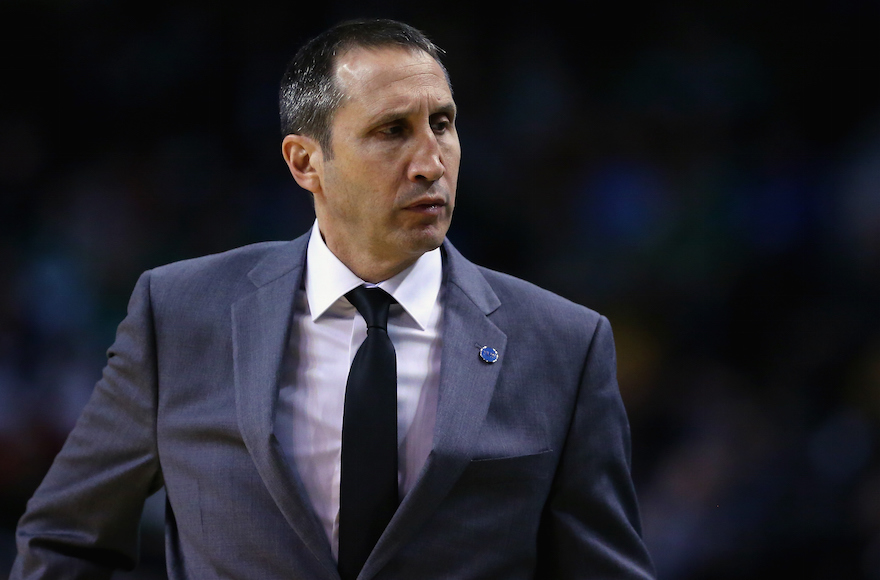 It’s a fact that has been swirling around the Internet since last Friday: By the numbers, former Cleveland Cavaliers David Blatt was the best coach ever to be fired in the middle of an NBA season.

His team’s 30-11 record, which has the Cavaliers atop the Eastern Conference, couldn’t save him from the impatience of the organization and its star player, LeBron James.

Nor could the fact that the former Maccabi Tel Aviv coach led the Cavs to within two games of an NBA championship last summer without two of its top  three players.

On Friday, Blatt was fired halfway though only his second season as Cleveland’s head coach.

Blatt’s legions of Israeli fans were outraged at the Cavs’ chutzpah — as were other NBA coaches, with several suggesting that Blatt still has a bright future in the league.

“David Blatt is going to be a highly sought-after coach this summer, if and when there are openings, if he chooses to stay,” Dallas Mavericks coach Rick Carlisle, who is also the president of the NBA Coaches Association, told the Dallas Morning News. “It just leaves you with a bit of an empty feeling. Because Blatt’s a good guy and he did a great job there.”

If Blatt is indeed looking for another shot in the NBA, here are some of the teams where basketball and Jewish logic suggest he could land next season.

The Nets are a team in disarray, as evidenced by their dismal 12-34 record and the recent firing of head coach Lionel Hollins. Former general manager Billy King, who traded away the team’s first round draft picks through 2019, has been demoted within the organization. An upside to the team’s awfulness under interim coach Tony Brown is that it’s devoid of egoistic stars (ahem, LeBron James).

If he followed in the footsteps of former Jewish Nets coach Lawrence Frank, Blatt might also inherit a receptive fan base. Brooklyn is the most Jewish county in the United States.

How the team’s enigmatic Russian billionaire owner, Mikhail Prokhorov, would treat Blatt is anyone’s guess. But as the former coach of the Russian national team, Blatt might be able to find common ground with the boss.

Blatt going to the Kings would be a fairy tale for Israeli fans: the only Israeli NBA coach teaming up with the only Israeli NBA player. Omri Casspi, who seems to have rejuvenated his career under veteran coach George Karl, is still a superstar in his native country. And while this is just Karl’s first full season at the helm in Sacramento, his tenure has been rocky: Some were predicting he would be ousted after a shaky start to this season.

Much of the unrest in Sacramento is credited to its star center, DeMarcus Cousins, who has been suspended by the league multiple times for his belligerent on-court behavior. The last thing Blatt needs is another player who is difficult to manage — but maybe the team could take another bonding trip to the Dead Sea.

Although Blatt grew up a diehard fan of the Laker’s arch-rival Boston Celtics, he would likely overcome his history to take one of the NBA’s top jobs. With the Kobe Bryant era coming to an end this season, Los Angeles will kick into full rebuilding mode — theoretically giving him more influence than he had to become accustomed to in Cleveland.

Coach Byron Scott hasn’t been fired yet, but his job is certainly in jeopardy as a result of a 9-37 record so far this season. Los Angeles is of course right behind New York in terms of Jewishness, and its weather is as close to Israel’s as it gets in the U.S. Maybe Blatt could even convince his family, which remained behind in Tel Aviv when he took the Cleveland job, to follow him to sunny L.A.

Phoenix has embraced a Jewish star before. Former Suns superstar Amar’e Stoudemire is the most prominent NBA player to identify as Jewish.

The Rockets are a less-likely landing spot for Blatt. Though the team is searching for stand-in J. B. Bickerstaff, it has a history of filling the role with former NBA players.

Plus, the roster presents a similar situation to the one Blatt is leaving behind in Cleveland: lots of high-profile talent (James Harden, Dwight Howard, Trevor Ariza and more) eager to win right now. But who knows — Jewish team owner Leslie Alexander could always make a bold move.

Minnesota doesn’t have a ton of Jewish or Israeli connections, but in basketball terms, the Timberwolves are a perfect fit for Blatt. With plenty of young talent, little to no immediate expectations and the promise of more top draft picks in years to come, the squad is in many ways what Blatt signed up for in Cleveland, before LeBron showed up.

Blatt would even get a second chance to coach Andrew Wiggins, a 20-year-old scorer he thought would be his star on the Cavs. LeBron’s return sent Wiggins in a trade to Minnesota for Kevin Love and turned Cleveland into a team with championship expectations — a pressurized situation that proved too much for Blatt as a first-time NBA coach fresh out of Israel.

When asked if interim head coach Sam Mitchell was a good fit for the team, Timberwolves legend Kevin Garnett (whose tenacity and skills have drawn at least one comparison to Israeli politician Tzipi Livni) recently said, “Next question.” Looks like Mitchell is officially on the hot seat.