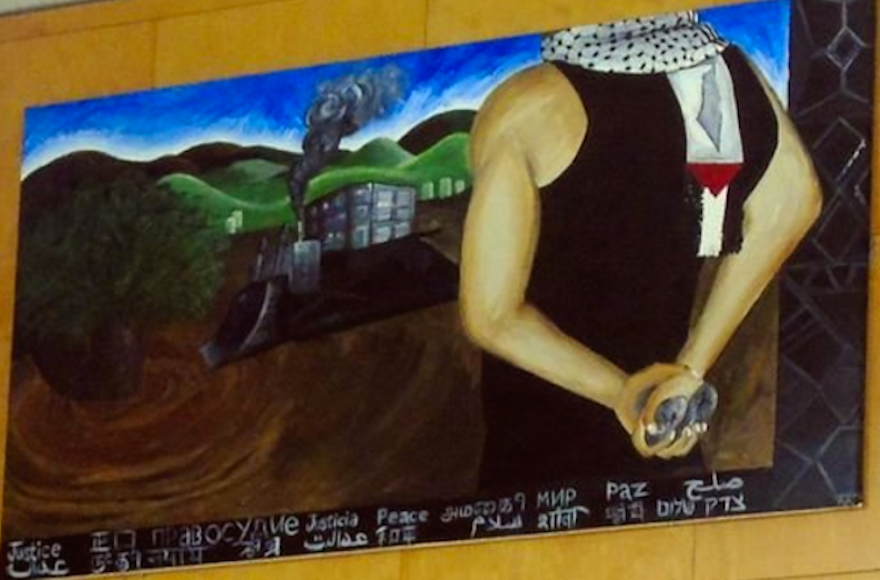 (JTA) — Canadian media executive Paul Bronfman has withdrawn his company’s support from York University in Toronto over a pro-Palestinian mural hanging in the student center.

Bronfman, the chairman of Pinewood Toronto Studios and William F. White International, a supplier of film production equipment, announced his decision to cut his donations to the university on Sunday. He also serves as a director of the Friends of Simon Wiesenthal Center, which has been critical of the painting, titled “Palestinian Roots.”

The acrylic painting, which won a student art contest, has been hanging in the center for three years. It shows a muscle-bound young man, whose head is covered with a kaffiyeh and wearing a scarf depicting the Palestinian flag and a map of Israel, holding rocks in his hand as he looks at a bulldozer in the distance. The words “justice” and “peace” appear in several languages at the bottom of the painting.

“As a Canadian, never mind as a Jew, the fact the administration would allow this piece of garbage to be displayed in a student lounge … This is something concrete I could point to and say, ‘Take that thing down or you’ll lose our support,’” Bronfman told the Canadian Jewish News in an interview.

Bronfman is a great-nephew of Samuel Bronfman, the late head of the Seagram’s beverage empire and patriarch of a major Jewish philanthropic family.

Through his companies, Bronfman has donated production equipment, invited students to open houses, and offered seminars, learning labs and technical training to students in the school’s arts programs, according to the Canadian Jewish News.

York said in a statement: “Freedom of expression is one of York’s guiding principles.” It also said the student center is “a separate and distinct legal entity,” and makes its own decisions as to what it displays in the building.

“We deeply regret Mr. Bronfman’s decision and would like to thank him for his support,” the statement said. “Our arts, media, performance and design students have benefited from the experiential learning activities made possible by his generosity.”

Gayle McFadden, vice president of operations of the York Federation of Students and chair of the university’s student center, told The Globe and Mail: “This artwork is not hateful and is the artist’s depiction of the resistance to the occupation of Palestinian land. This painting is not anti-Semitic, as it is merely critical of the State of Israel and its continued occupation of Palestine.”

Jewish students told the newspaper they do not feel safe on campus due to relentless criticism of Israel.