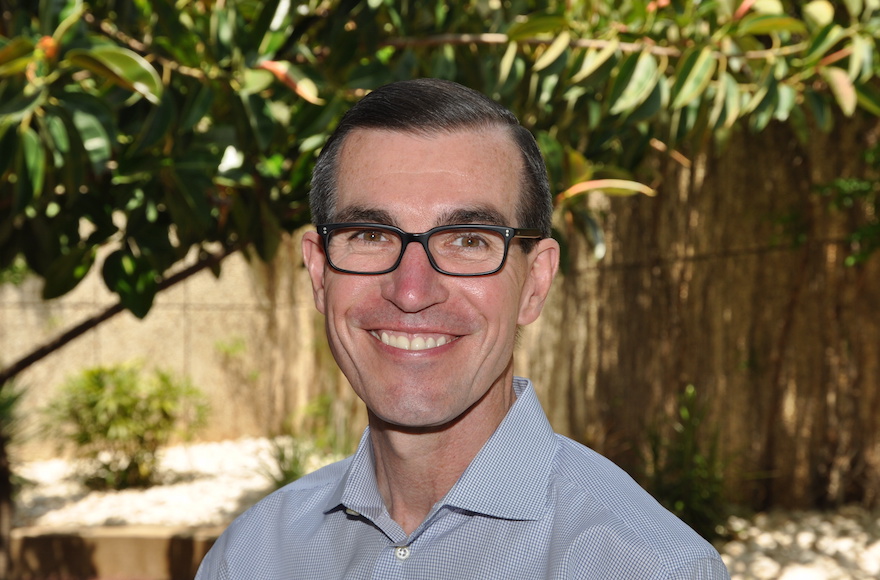 This story was sponsored by Beit Hatfutsot.

TEL AVIV — Museum designer Patrick Gallagher, 60, has been at the forefront of museum design and exhibit planning for decades. But perhaps no project has resonated as deeply with his personal life as his current project: the relaunch of The Museum of the Jewish People at Beit Hatfutsot.

The president and founder of the Washington, D.C.-based design firm Gallagher & Associates, Gallagher grew up in an Irish Catholic family outside of Chicago; he converted to Judaism when he met his Conservative Jewish wife 30 years ago. His story embodies exactly the kind of out-of-the-box Jewish journey that the museum hopes to tap into with its upcoming $100 million overhaul — a project that includes transforming the current museum into a tech-savvy, interactive repository for Jewish stories from yesterday, today and tomorrow.

Gallagher’s ability to conceptualize a visitors’ experience at a museum — along with expertly recalibrating the ever-shifting intersections of history, aesthetics and new technological tools — has helped him bring fresh visions to high-profile institutions such as the National World War II Museum and the National History Museum of Los Angeles. His work has earned him numerous awards, including a prestigious fellowship from the Society for Environmental Graphic Design.

As a museum designer, Gallagher says he’s essentially an institution’s chief storyteller, tasked with mapping how a visitor will take in a museum’s narrative, in real time, from start to finish.

But with his work with Beit Hatfutsot, he’s also incorporated a different type of approach: He’s turned inward for inspiration.

“There’s such a personal perspective here,” Gallagher says of the relaunch of Beit Hatfutsot, which first opened in 1978 on the campus of Tel Aviv University. It will be reborn this year as The Museum of the Jewish People, with the first phase opening in May.

“At the beginning,” he says, “what really made us [at Gallagher & Associates] understand what needed to be the voice of the museum was this whole concept of how people identify themselves and define their own Jewish identity.”

For Gallagher, his own Jewish identity sprang from a desire to provide his children with a common faith — one shared by both mother and father. Gallagher began exploring Judaism when he met his wife, Tracey, now 56. He found himself immediately drawn to the faith’s flexibility, dynamism and emphasis on open questions.

“The nature of being a designer means you are rebellious and you question things aggressively,” he says. “And from that standpoint, there are very distinctive differences between Judaism and Catholicism.”

He converted before the first of the couple’s two sons, Joshua, 26, and Jacob, 24, was born. The process took several years because of his grueling travel schedule — Gallagher’s firm maintains offices in D.C., San Francisco and Singapore, and works on projects across the globe.

But while he admits his conversion was motivated by love for his wife and future family, he says he adores his adoptive faith and has found an immense spiritual well to dip into.

“What I found so stimulating about Judaism was that the more I questioned it, the deeper I was able to go with my own sense of understanding,” he says. 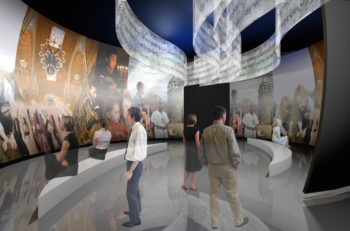 “I challenge everything that I get involved with,” he adds. “Design is the same way. And it’s easy with anything to just skate across the top and take it at face value, but with Judaism, I found that no matter how much I challenged it, it took me to a deeper level, to different answers and pursuits.”

Gallagher has designed a significant number of Holocaust museums and Jewish history projects — including the award-winning National Museum of American Jewish History in Philadelphia — because he feels the work is a crucial tool for helping his own sons connect to their Jewish roots.

Gallagher’s work with The Museum of the Jewish People at Beit Hatfutsot has involved a great deal of discussion about what it means to be a Jew, he says, and how to display, in tangible form, the nuanced, complicated and ever-shifting qualities that make up Jewish identity around the globe today.

“Unless you know the Jewish people and understand their passion, it’s sometimes difficult to understand their identity and what’s important to them,” he says. “That was, at its core, the beginning of us understanding what needed to be the voice of the museum — this whole concept of how people identify themselves and how they define their Jewish identities.”

Like his own journey to Jewish spirituality, Gallagher’s vision for the reborn Museum of the Jewish People is unconventional and creative.

Rather than start with ancient history and work its way forward, the museum will instead anchor itself firmly in the present — and then allow visitors to choose how far back in time they wish to travel. The modern Jewish story — who are the Jews of today’s world, and what both distinguishes them and binds them together? — is the narrative that will launch visitors’ experiences.

The exploration of these central questions will travel with museum-goers throughout the renovated building’s three floors.

Visitors will begin their experience on the third floor, then work their way down. When they exit the elevator and come into the first exhibit, they will immediately be faced with a series of vertical, motion-sensing pylons that will fill with moving images of Jews around the world speaking about how they define their own Jewish identities.

After taking in the technology — Gallagher compares it to walking through a crowd of very different-looking people who all share one beautiful faith — visitors will have the chance to input their own perspectives, thus folding their personal stories into the evolving fabric of the museum.

“This story, the story of the Jewish people, is evolutionary,” he says. “It’s constantly in flux. And the museum will be the same way, too – it will change each day based on who was there.”

The next floor down will look at individuals and cultural centers that have anchored Jews through time, such as biblical heroes like Moses and hubs of Jewish communal life in prewar Europe. The ground floor will be an interactive look at the Jewish life cycle.

His goal, Gallagher says, is not to bombard but to coax visitors to dip their feet into an impossibly deep pool and just get a feel for the water.

“This museum is not artifact-based, so while we are going to have some artifacts, it’s a museum based on stories — which means technology is playing a huge role,” he adds.

And while his personal journey folds right in, Gallagher insists he is but one of hundreds of thousands of voices who will define the new museum.

“The storyteller in this museum, effectively, is the visitor himself,” he says.