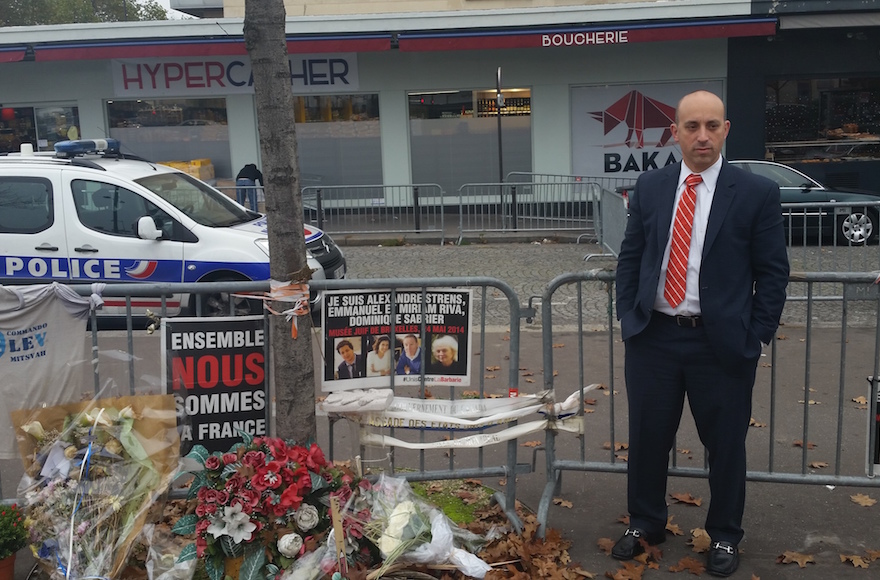 WASHINGTON (JTA) – Framed by a slide of two young guys in jeans and tees playing ping-pong on the Facebook campus, Jonathan Greenblatt described an event hosted by the social media behemoth in Palo Alto, California, the week before.

“Some of the stuff we’ve done has been really exciting, like in Silicon Valley,” Greenblatt, then the Anti-Defamation League’s freshly minted director, said, citing the ADL’s participation in an effort to combat cyber hate.

It was Greenblatt’s first major address before the ADL’s national commission, and it burst with business speak — terms like “operating environment” and “reshaping markets.” It may have nonplussed the crowd accustomed to the soaring rhetoric leavened with Yiddishkeit that characterized speeches by Greenblatt’s predecessor, Abraham Foxman; Greenblatt’s first applause came 30 minutes into the speech.

Greenblatt took the helm of the ADL in July, and already there are subtle but significant differences in how he is leading the venerable civil rights organization. He has attached chief executive officer to the traditional title of national director. Last month he hired Shari Gersten, a former Silicon Valley executive and fellow veteran of the Clinton-era Commerce Department, to handle the ADL’s external relations.

“We’ve got to figure out how to use the contemporary vernacular,” Greenblatt said in an interview with JTA. “Having been in a couple of White Houses, I have a tendency to want to succeed and execute objectives. You tend to be smart and strategic about leveraging your assets to succeed.” 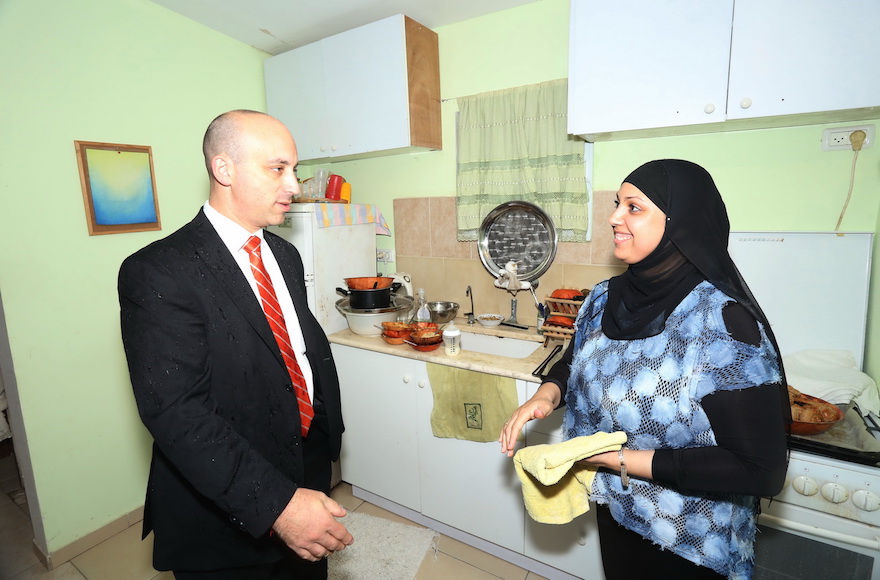 Jonathan Greenblatt at a nursery for Arab and Jewish children during a trip to Israel , October 2015. (Courtesy of the Anti-Defamation League)

Greenblatt’s Silicon Valley example was a telling one for the new ADL chief, a former California entrepreneur and White House staffer who took over from the iconic Foxman.

Foxman, who had worked for the league for 50 years — 28 as national director — led the group through a period in which the Internet emerged as fertile territory for the dissemination of hatred. He even wrote a book on that subject.

READ: At Foxman farewell, lots of hugs (from Abe) and murmurs (about Oren)

But unlike Greenblatt, who evinces an enthusiasm for new media born of a dozen years mixing with the California tech world, Foxman remained frustrated by his limited success with Internet companies. Just four years before Greenblatt’s speech, delivered this past October in Denver, Foxman’s address to the same gathering itemized the various ways Facebook was failing to police the hateful content posted by its users.

“We have been talking to the geniuses at Palo Alto,” Foxman told JTA in 2013. “We have said to them, ‘Thanks, but no thanks. You developed a technology that has some wonderful things but also has unintended consequences.’”

The difference in approach is emblematic of the broader challenges facing the ADL, founded in 1913, in its second century.

An organization that once mediated between the Jewish community and the American establishment is grappling with tectonic changes in both. At a time when Donald Trump and Bernie Sanders are raiding its stately precincts, the very notion of an American establishment seems quaint. So does the idea of a unified Jewish voice in the age of Twitter and Facebook.

“Diversity is no longer an imperative, it is an inevitability,” Greenblatt said in Denver. “We will embrace our universalism even as we lean into our Jewish identity and we embrace our Jewish values.”

That mission — fighting both anti-Semitism specifically and defamation more broadly — has defined the league since its founding. At times it was obscured under Foxman, a Holocaust survivor who became the media’s go-to guy on questions of anti-Semitism and helped popularize the idea of a “new anti-Semitism” defined largely by animosity toward the Jewish state.

Comparisons to Foxman, who defined the ADL for a quarter-century, are inevitable. Greenblatt handles them with grace.

“I’m blessed to stand on the shoulders of [Benjamin] Epstein, Nathan Perlmutter and Abe and others,” he said in one of two lengthy interviews conducted since assuming his post in July, enumerating his predecessors spanning the years 1947-2015.

That span — nearly 70 years, comprising the leadership of just three men — underscores the momentousness of their replacement by a social media savant best known for his successful foray into the new economy with the bottled water company Ethos, as well as for heading an Obama White House office matching the new business titans with social service projects.

Foxman and the others were attorneys, skilled in the art of persuasion and unabashed advocates for the Jewish community. Greenblatt is a policy wonk and a businessman high on synergy, with an emphasis on relationship building.

Greenblatt’s relationship with the ADL began when he interned at its Boston office as a college student. His boss there later introduced him to his wife, Marjan Keypour Greenblatt, who was the associate director of the ADL office in Los Angeles for eight years. Greenblatt went on to work in the Commerce Department in the first Clinton administration.

In 2003, he and a classmate from Northwestern’s Kellogg School of Management launched Ethos, which donates a portion of its profits to finance water programs in developing countries. After Starbucks bought the company, Greenblatt went on to serve on the board of Water.org, a nonprofit co-founded by the actor Matt Damon. He also started an open-source platform for volunteers called All for Good and served as CEO of the media company GOOD Worldwide.

Greenblatt is comfortable with the language of millennials and Silicon Valley in a way none of his predecessors were. He spoke of understanding the “modalities” of California tech culture and of the “plugs and patches” being developed by the social media giants to combat online hate. 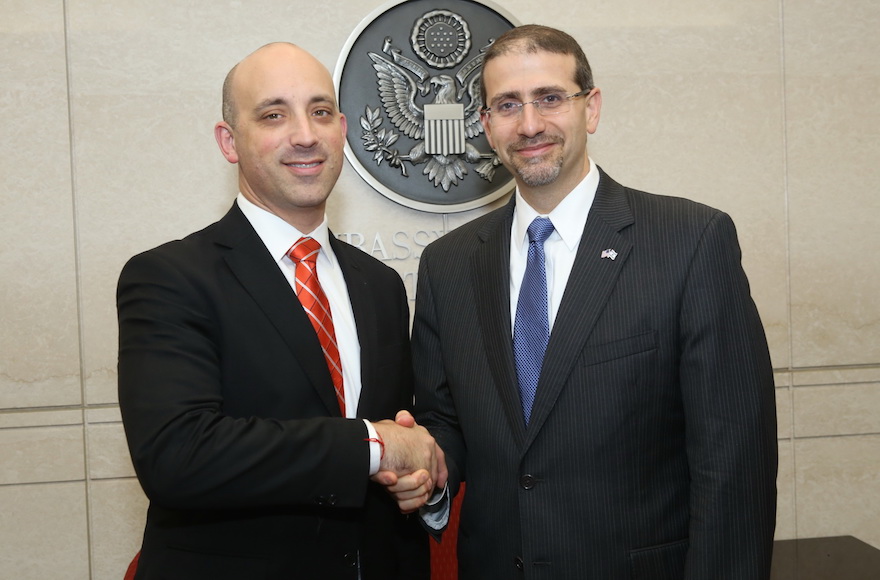 Jonathan Greenblatt, left, with the U.S. ambassador to Israel, Dan Shapiro, at the U.S. Embassy in Israel, October 2015. (Courtesy of the Anti-Defamation League)

He has also been clear that in embracing a younger generation, the old guard will have to get over some of the perceived cultural slights that prompted stern rebukes from Foxman. In Denver, standing before a backdrop of a publicity shot from the HBO hit series “Girls,” he referred to the dust-up just six months earlier when Foxman slammed the show’s star, Lena Dunham, for an essay comparing the relative merits of Jewish boyfriends and dogs.

“I know that we at ADL are particularly familiar with Hannah, but we should talk about millennials for a moment,” he said, referring to the name of the Dunham character on “Girls.” “They have high expectations and a high sense of entitlement. But you know what? They all want to do good.”

It’s hard to say whether Greenblatt’s attempt to steer the ship in a more youthful direction is going to resonate. His first applause line in Denver came only after he committed himself to the ADL’s original mission “to fight the defamation of the Jewish people and to secure justice and fair treatment for all.

Yet even as he pushes to the old guard to loosen their collars, Greenblatt still cherishes the ADL’s role as arbiter — even more so at a time of increasing heated and polarizing political rhetoric.

“I actually think people crave reason, people recoil from politics and public conversation when it becomes a venue for trolling and ad hominem attacks and vitriol,” he said.

It remains to be seen if the Jewish community is still willing to have the ADL act as the standard-bearer of permissible discourse. Recent years have seen the organization hit from the left for opposing an Islamic cultural center near Ground Zero in Manhattan and from the right for focusing too much on domestic hate crimes and defending Muslims — and not enough on Israel and rising anti-Semitism in Europe.

Greenblatt may face additional pressure because of his ties to the Obama White House. In December, after the ADL backed the administration’s bid to rejoin UNESCO despite the cultural organization’s 2011 decision to admit Palestine as a member state, the Zionist Organization of America wondered if it was because of “pressure on Obama’s friend and former colleague.”

The suggestion that he won’t oppose the White House if necessary irks Greenblatt.

“Look at how we took a position on the Iran deal,” he said, noting the ADL had joined other major Jewish groups in opposing the nuclear agreement that the United States helped negotiate with Iran over the summer. “It was not aligned with my former employer.”

Still, Greenblatt is eager to turn the spotlight back on domestic concerns. After assuming his new role last summer, his first initiative was #50StatesAgainstHate (note the hashtag), a bid to establish a uniform definition of hate crimes for the entire country. With a $50 million budget, 27 regional offices and 300 employees, Greenblatt argued that the ADL was uniquely well positioned to lead the fight.

“We’ve got the kind of field structure we need to effectively engage with state legislators,” he said in Denver. “You do it one legislator, one district at a time.”

But one senses that Greenblatt’s real passion is to reposition the ADL for an age in which the communal ramparts are not nearly as steep. In previous years, the organization would occasionally start the New Year with a list of top 10 issues affecting the Jewish community.

This year, the list was of the 10 most inspiring moments of 2015, Jewish and non-Jewish: a Muslim worker who saved Jews in a Paris kosher supermarket; Norwegian Muslims protecting a synagogue; a 7-year-old in Texas who donated his life savings to a vandalized mosque. There were two nods to the LGBT community (marriage equality, greater acceptance for transgender Americans) and one to an immigration activist who gained U.S. citizenship. Only one was purely Jewish: the United Nations’ first-ever conference on anti-Semitism.

If the ADL wants to galvanize the next generation, Greenblatt said in Denver, it better adjust to a world in which black lives and transgender rights are of as much concern to young Jews as anti-Semitism.