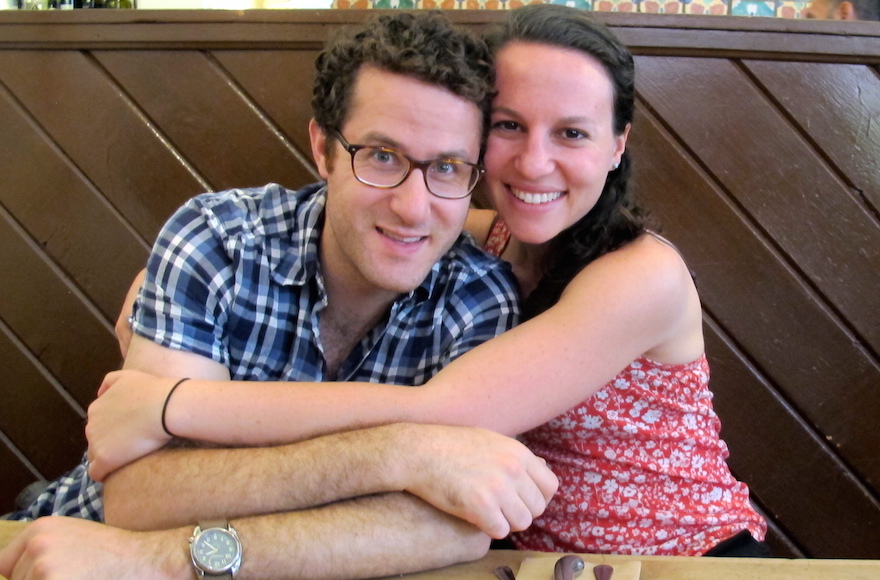 LOS ANGELES (JTA) — In December, around the time my wife and I were celebrating our 35th wedding anniversary, we received an invitation to an outdoor Jewish wedding to be held on Valentine’s Day 2016. Printed on a red postcard affixed with a heart postage stamp, the couple, Lena Silver and Aaron Wolfson, “joyfully” invited us to a “celebration of their love and commitment” in Palos Verdes, California.

“Please bring something warm to wear,” the invite advised, since it was being held near the ocean. And warm is what I wanted to feel — there’s a special kind of heat that’s generated at a Jewish wedding, with all the words, rings, glass breaking and guests dancing, encircling the couple and bringing them together.

Adding to that, the bride’s father and I have been friends since we were teens. I had attended his wedding, and he, as a young rabbinic student, had co-officiated at mine. Remembering how traditional the day was, a wedding on Valentine’s Day — with its murky ties to several early priests named Valentine — gave me pause. Would a Jewish wedding on Valentine’s Day be too corny, too cute, too out of Jewish context?

While clearly not a red-letter day on the Jewish calendar, for many Jews of my generation, Valentine’s Day always seemed like a secular and harmless way to express friendship — and later, love — beginning with the time-honored exchange of Valentines in elementary school. Since my teachers insisted we bring cards for every student, even the new ones, I realize now, looking back, that this probably was my first experience practicing the Torah concept of “welcoming the stranger.”

Still, handing out cartoon-character Valentines to classmates is far different a religious, and public, declaration of lifelong love. Checking online, I quickly found three other Jewish couples — two from Los Angeles, a third from New York — who also were planning to stand under the huppah on Valentine’s Day. Were other Jewish couples just taking advantage of Feb. 14 being a Sunday, a popular day for Jewish weddings, as it’s not Shabbat yet still the weekend? Or is this another phase in the continued warming of Jews to what was originally a Christian holiday?

For answers, I went straight to the couple whose wedding I’ll soon attend.

“It was all about Monday being a holiday,” said Aaron, who met Lena on OkCupid, an online dating service, while he was attending Boston University medical school in 2012.

The couple wanted to “maximize the amount of people” who were coming from out of town, and with Presidents’ Day on Feb. 15, having the wedding on Valentine’s Day was a “brilliant” solution, explained the soon-to-be groom, who was now in a cardiology fellowship at Los Angeles County Hospital and the University of Southern California.

“I was actually pretty embarrassed, but it’s a very convenient day,” added Lena, who was attending Harvard Law School when the couple started dating and is now an attorney with Neighborhood Legal Services of Los Angeles County. “First, we were going to ignore that it was Valentine’s Day, then we decided to embrace it.”

“It sure helped us to decide what kippah to have,” interjected Aaron, referring to the pink suede skullcaps adorned with hearts that will be given out for guests to wear.

The couple is also planning a Valentine’s Day craft table for their guests to make cards. 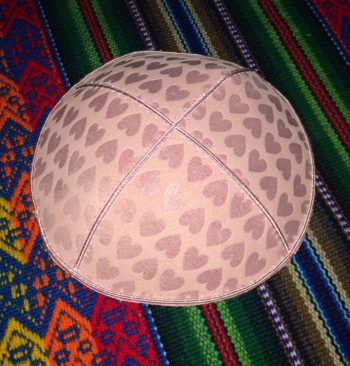 This kippah will be distributed at the wedding of Lena Silver and Aaron Wolfson. (Courtesy of Silver and Wolfson)

But that’s not all the crafting that has gone into this Valentine’s Day wedding. Together, Aaron and Lena have modified the Jewish wedding ceremony to incorporate what they feel is an expression of their loving, egalitarian relationship.

Instead of a traditional ketubah — the Jewish wedding contract that is signed before the ceremony — the couple is using a shtar brit, a covenant agreement.

Traditionally, a ketubah is  a “unilateral agreement” in which “the husband guarantees to his wife that he will meet certain minimum human and financial conditions of the marriage,” according to Rabbi Maurice Lamm in “The Jewish Way in Love and Marriage.”

Though today there are various forms of egalitarian ketubot, Lena felt that “they don’t really give couples an opportunity to explore more expansive commitments they make to each other.”

So instead, Lena and Aaron created their own contract. It’s adapted from a variety of sources, including Rachel Adler’s book “Engendering Judaism,” an article on Ritualwell by Rabbi Heather Altman and Heather Sapiro, and a shtar brit used by Lena’s cousin. The final document, painted by Lena’s great-aunt, “memorializes” the couple’s “shared commitments to each other in different facets of their relationship — economic, domestic, and personal,” according to the program the couple will distribute at the wedding.

They are also making changes to the ring ceremony by having a brit ahuvim, a lover’s covenant, a concept they also adapted from the same Ritualwell article.

The traditional Jewish wedding-ring ceremony, called kiddushin, is when the groom acquires the bride by giving her a small token — usually a ring —  and declaring “Behold, you are betrothed unto me with this ring, according to the law of Moses and Israel.”

During the brit ahuvim ceremony, rather than each putting a ring on the other’s hand, Lena and Aaron will each put a ring in a pouch, symbolically joining their beings and possessions. As they lift the pouch, they will be making a commitment to their loving relationship.

“Why not just use two rings?” I asked, as my wife and I had done at our wedding.

“Both partners acquire the other through the ring ceremony,” Lena responded in an email. “We felt that rather than acquire each other — which means we/our bodies are the property of the other — a ceremony that represents the creation of an equal partnership was more representative of what we hoped to express though our wedding ceremony.”

Still, with all this businesslike discussion of contracts, covenants and who may or may not be acquiring whom, I started to think that my search for a romantic Jewish wedding connection to Valentine’s Day had melted like a box of candy left in the California sun.

There goes my thesis that a Jewish wedding on Valentine’s Day might seem more romantic than contractual, I said.

“I disagree,” Lena said. “I think entering into a committed equal relationship is extremely romantic.”

She was right, I realized. Better than any sentimental card or overly sweet candy, the soon-to-be bride gave me a new way to look at the heart of my relationship, 35 years after my wedding day.