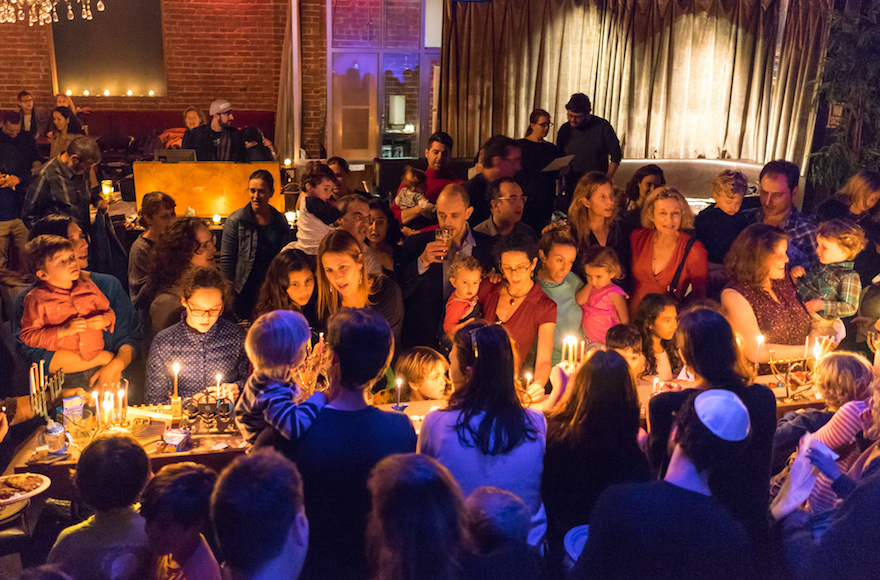 NEW YORK (JTA) – In the summer of 2011, Lizzi Heydemann returned to her native Chicago to establish a Jewish community loosely modeled on Ikar, the Los Angeles congregation where she had spent two years as a rabbinic intern.

She set about harvesting email addresses and putting out the word on social media. Heydemann called her community Mishkan – the Hebrew word for the mobile sanctuary built by the ancient Israelites from communal donations.

Heydemann’s first Shabbat service, held in someone’s living room, drew 65 people. The numbers snowballed from there – 90, 120, 150 for the monthly service. Mishkan’s first High Holiday service, in 2012, drew 600 people. The following year, it was 900 – among them Chicago Mayor Rahm Emanuel and his daughters. Last year, the service had 1,400 worshippers, comparable to what many large and established synagogues draw on the High Holidays.

“Synagogues just haven’t been doing it for the vast majority of Jews in America,” Heydemann said. “And that means there are a lot of really thirsty people out there.”

At a time of communal hand-wringing over declining rates of Jewish identification and synagogue membership — evident most recently in the 2013 Pew survey of American Jews — a handful of independent rabbis like Heydemann have demonstrated a consistent knack for drawing large numbers of mostly younger and mostly unaffiliated Jews to religious services.

Now seven of those rabbis are joining together in an effort to share their methods of connecting with this elusive cohort, which the institutional Jewish community has spent millions trying to reach.

The Jewish Emergent Network — a new partnership of communities widely hailed for their innovative spirit and proven success in attracting the young and unaffiliated — announced last month that it was establishing a fellowship for early-career rabbis. Modeled on the fellowship Heydemann did at Ikar, the program will place the seven rabbis in each of the participating communities for two years, during which they will receive mentorship and other training. Funded by the Jim Joseph Foundation and the Crown family of Chicago, the fellowship will begin in June.

The participating communities — in addition to Ikar and Mishkan, the group includes Lab/Shul and Romemu in New York, The Kitchen in San Francisco, Kavana in Seattle and Sixth & I in Washington, D.C. — are among the most successful young congregations in the United States.

They are led by rabbis routinely named to various annual lists of the most influential Jews and top American rabbis. Two of the seven showed up on the website Jewrotica’s lists of the sexiest rabbis. They use buzzwords like “high-content Judaism” and “DIY Judaism.” They have “spiritual directors” instead of rabbis and “live entertainment managers” in place of cantors. Their services tend to be lively and musically oriented, and they are explicitly committed to welcoming all comers, regardless of level of religious practice or sexual orientation — or even whether the participants are Jewish.

And even though none of these communities are affiliated with the major denominations and most don’t have a regular space, let alone their own building, they are consistently able to draw hundreds to weekly Shabbat services and thousands on the High Holidays. The vast majority of attendees are under 40 and unaffiliated with traditional synagogues.

“People in the network are simply doing R&D in the trenches,” said Amichai Lau-Lavie, the director of Lab/Shul, a 3-year-old “everybody-friendly” and “God-optional” community that drew more than 2,000 people to High Holiday services last year. “I think by the nature of things, the seminaries will catch up. The seminaries will always be behind people in the trenches.”

Though the individual communities differ somewhat in their particulars, they share a conviction that declining synagogue affiliation rates are not evidence that Jews have lost interest in Judaism. Rather, members suggest that traditional synagogues are largely unable to speak to the Jewish masses — either because they are too rigid and dogmatic, or because they have watered things down to the point where Judaism fails to inspire.

“The secret sauce is some kind of combination of being radically accessible and welcoming on the one hand, and raising the bar on engagement [on the other],” said Ikar leader Sharon Brous, who was named America’s top rabbi in 2013 by The Daily Beast.

READ: Getting to the IKAR about Rabbi Sharon Brous

“At Ikar we strive for an environment that really welcomes and embraces everyone – including folks who are ambivalent, atheist or just cynical about community, ritual, even God,” Brous said. “And at the same time, we don’t lower the bar for them. If we did, they’d walk in and run out.”

Whatever it is, the approach appears to be working. Noa Kushner, the fourth-generation Reform rabbi who leads The Kitchen, drew 1,000 people to High Holiday services last year in the most secular major metropolitan area of the country. A self-described “religious start-up,” The Kitchen is experimenting with a range of Silicon Valley-esque products, from a Pause app to create space daily for awe and gratitude to a deck of Passover cards to help newbies run their first seder.

“We don’t check pedigrees at the door,” Kushner said. “We have radical access. Anyone can stand up and say Kaddish. If you want to roll up your sleeves and do Jewish, we want you there.”

The Jewish Emergent Network came about through informal discussions among the communities over the past two years. So far it has raised $4 million toward a projected budget of $6 million that would fund two fellowship cohorts over four years.

Participants hope the fellowship will help spread their methods and thinking to other communities and, more broadly, that the network will help strengthen communities doing similar work. Beyond the fellowship, they are unsure where their partnership will lead, but they are certain where it won’t: For a group whose independence from the constraints of denominational affiliation has been their calling card, they are careful not to become what they have rebelled against.

“Some people have suggested, you’re building a movement. And I say, God forbid,” Brous said. “I have no interest in creating new institutional spaces with national conferences that people will roll their eyes at going to.

“My interest is in supporting each other, lifting the American Jewish community out of the demographic free fall and inspiring creative work.”