See how teen pals found each other some 50 years later 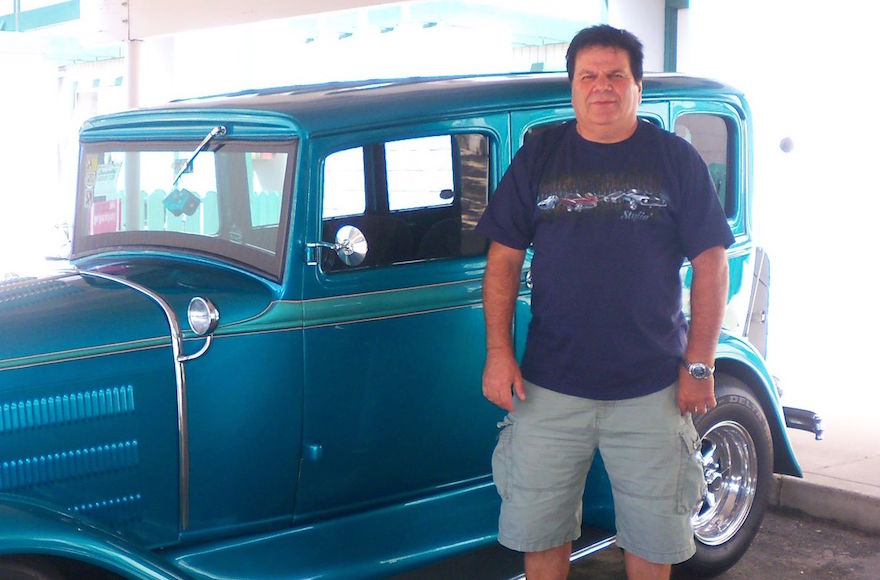 David Bak, alongside the 1932 Chevrolet Model A he restored, found a friend he worked with at a Haifa auto repair shop in the late 1960s. (Courtesy of David Bak)
Advertisement

(JTA) – As a librarian, Oren Kaplan researches obscure facts and utilizes databases to track down information.

So when the Haifa resident read a recent “Seeking Kin” column about someone in his city, Menahem Orenstein, who hoped to locate a long-lost childhood buddy, Kaplan decided to put his experience to work.

Orenstein and Bak, who worked together at a Haifa auto repair shop in the late 1960s while attending technical high schools, expressed delight at reconnecting and hope to meet within a year.

Much to the delight of Kaplan, a Maryland native who works at the central library at the Technion: Israel Institute of Technology. He described the gratification he feels: “a combination of solving a crossword puzzle, winning at Bingo, inventing the light bulb and watching someone taste ice cream for the first time.”

When Orenstein called, Bak admitted to being “shocked and surprised.”

READ: Where is his buddy in the Bonneville?

Orenstein would telephone Bak nearly every day for a week, and between conversations they corresponded and exchanged pictures through Facebook.

On a 2011 visit to Haifa, Bak said he searched for Orenstein, but couldn’t remember his surname – the consequence of more than 40 years’ passage.

Since his parents moved the family to the United States in 1968 – not 1969, as Orenstein had recalled – Bak has retained a passion for cars, and not just those he repaired for a living.

In the early 1970s, he bought a 1966 Chevrolet El Camino and over the years redid its chassis, souped up the engine and repainted it several times. Eventually Bak gave the car to his son, Daniel, who lives in Sacramento and drives it most Sundays. Still, at age 50, the El Camino has traveled only 66,000 miles.

Bak also repaired and enjoyed driving a 1932 Chevrolet Model A before selling it four years ago. And he’s bought, repaired and sold many other cars.

Most of Bak’s career, though, was spent working in warehouses and being a heavy-equipment operator. Now, at 64, he’s retired. In addition to his son, he has a daughter, Rachel, who lives in Los Angeles, and a granddaughter. Later this year he’ll visit the Philippines, the homeland of his second wife. The trip after he’ll go to Israel.

He recalled his family leaving Israel because his father, Benzion, was concerned by Bak’s approaching draft age. But in America, Bak learned he also could be drafted and possibly sent to Vietnam.

Bak thought then, “Forget this – I’d rather fight [for Israel].” He nearly returned, until his U.S. military draft lottery number wasn’t called.

His family settled in Oakland because Bak’s paternal uncle, Boris, had moved there several years earlier. Natives of Poland, Benzion and Boris made it to Israel after spending 10 years in a Russian prison, where the brothers were incarcerated for fighting for the partisans. Seven of their brothers and sisters were murdered in the Holocaust. Three other siblings survived, settling in Uruguay, Israel and America.

Bak’s mother, Susanna, a native of Germany who survived the Holocaust, is now 88 and lives with Bak’s sister, Sara Horn, near Los Angeles.

Now back to Bak and Beck.

In searching for Bak, the key stumbling block for Orenstein and “Seeking Kin” was misspelling his surname Beck.

But when Kaplan tried the unconventional spelling, the dominoes fell. He searched on the websites of various public-records database aggregators, such as Intelius.com and Radaris.com, where the information matched some of what had appeared in the “Seeking Kin” column, such as the names of Benzion, who died in 2005 and is buried near Oakland; and of Susanna. Kaplan even turned up a contemporary photograph of Bak that bears a striking resemblance to the one appearing in the “Seeking Kin” article.

That image, showing the teenage Bak sitting in a 1962 Bonneville, was snapped on Oakland’s Walker Avenue, in front of an apartment building where the family lived. Bak recalled with delight that he smuggled 12 high school friends who crammed into the Bonneville’s trunk into the since-razed Union City Drive-In to watch a movie.

For Orenstein, finding Bak is a climax equaling any film.

“It’s exciting – no doubt about it. It’s the closing of a loop after 45 years. It’s nostalgia,” he said. “The decades passed – the first, second, third and fourth – and the curiosity increased. We can’t return to the days of yore, but [now] we can visit each other and share our experiences.”

Orenstein said he’ll arrange a reunion of those who once worked at Garage Express, now called Hyundai Garage. The shop’s former owner, Zeev Solomon, has pledged to attend, as has the current owner, Danny Finkelstein — his late father, Baruch, owned the shop when Orenstein and Bak worked there as teens.

Coming back, too, are several long-ago mechanics with whom Orenstein has maintained contact: Uzi Balila, Yossi Itzkovitch, Yaakov Bichacho and David Kuba.

The one who’ll make the gathering complete, Orenstein said, is Bak.