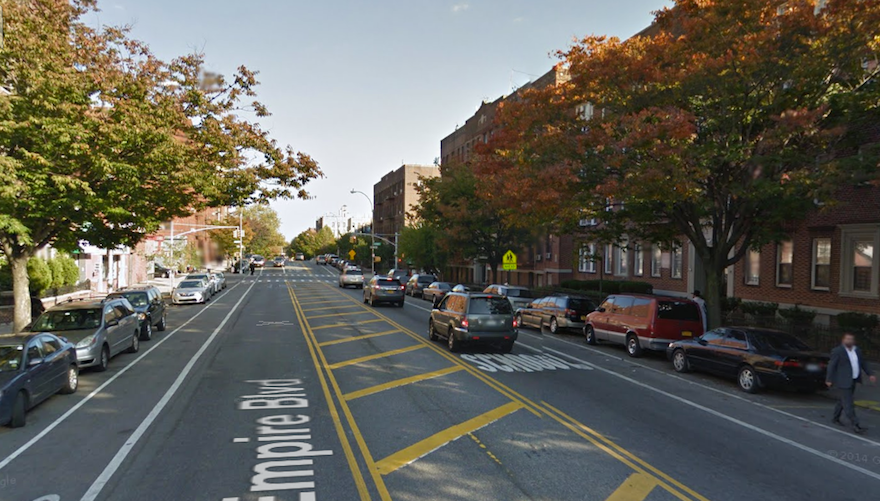 On Feb. 10, 2016, an Orthodox man was stabbed on this block of Empire Boulevard in Crown Heights. (Google Street View)
Advertisement

NEW YORK (JTA) — An Orthodox man was stabbed on a sidewalk in the Brooklyn neighborhood that is home to the Chabad-Lubavitch movement’s world headquarters.

Yehuda Lib Brikman, 25, who according to JPUpdates is newly married, was stabbed Wednesday morning in the upper back on a residential street in Crown Heights. He was rushed to Kings County Hospital in serious but stable condition shortly before noon.

The alleged assailant was an African-American man, according to JP Updates. Police are investigating the incident — it is not clear whether or not they are looking it as a hate crime. The victim did not know the assailant and the attack was unprovoked, police said.

“No words were exchanged and there was not a fight,” a police spokeswoman said, according to AM New York.

The attack occurred days after a 49-year-old Orthodox man was brutally beaten and robbed in Borough Park, another heavily Orthodox section of Brooklyn. In that incident, the victim was attacked by several people, who put him in a chokehold and kicked him in the face several times, then took his wallet, according to CBS Local.

There have been numerous other attacks on Orthodox men in Brooklyn in the past few months. In two separate incidents in Midwood in late December, a 17-year-old yeshiva student and 60-year-old man were assaulted and robbed.

Also in late December, an African-American male reportedly punched an Orthodox student on the campus of Medgar Evers College. Before fleeing the Crown Heights school, the alleged assailant reportedly said, “I don’t like white and Jewish boys, leave the school, you Jew.”

The Anti-Defamation League released a statement Tuesday condemning the acts and calling on public officials to take a stronger stand against the violence. The group also offered a $5,000 reward for information leading to the arrest and conviction of the assailant.

“Brooklyn’s Jewish community is once again suffering from apparent targeted acts of hate with this latest stabbing in Crown Heights,” ADL New York regional director Evan R. Bernstein and regional board chair Andrew Frackman said in the statement. “Enough is enough. Our community leaders, religious leaders across all faiths, and elected officials have a critical role to play when incidents of this nature occur. They must make clear with increased vigor that acts motivated by anti-Semitism or any kind of bigotry will not be tolerated on our streets.’