Kahane’s widow: Jewish extremists ‘have nothing to do with’ Kahane’s ideology 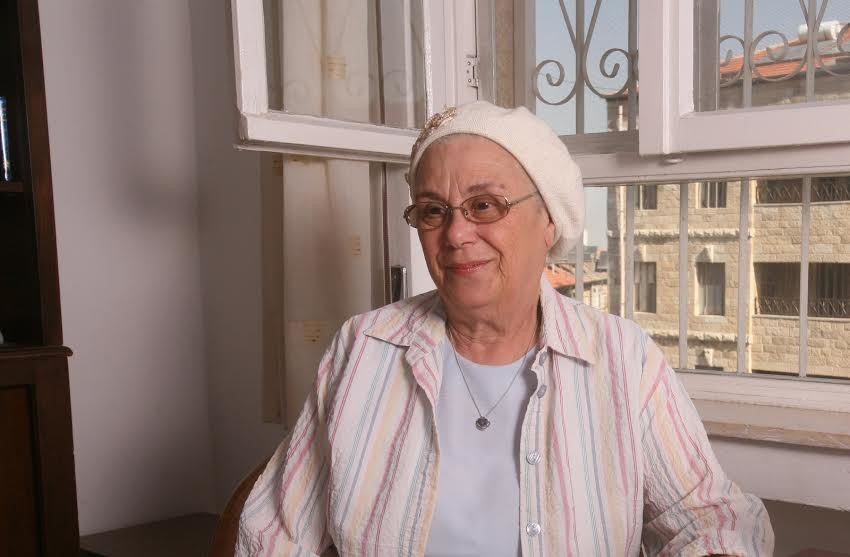 Libby Kahane, wife of the slain extremist Rabbi Meir Kahane, now has a grandson in prison for heading an extremist group. (Courtesy of Libby Kahane)
Advertisement

JERUSALEM (JTA) – Her husband was assassinated and her grandson is in prison.

But Libby Kahane, widow of the late far-right Rabbi Meir Kahane, has remained faithful to her husband’s ideology.

She repeats his call for Israel to expel its Arab population. She believes the Israeli left, Jewish media and some American Jews – particularly college students – are hurting Israel. She denies that Jews are responsible for last July’s arson attack in the West Bank village of Duma, which killed three members of a Palestinian family.

But she says her grandson Meir Ettinger, who has been held in an Israeli prison without charge since last August for leading a Jewish extremist group, has failed to live up to Kahane’s way.

Kahane sat down with JTA recently to talk about Ettinger, the biography she’s writing about Meir Kahane and why the Israeli government has no right to cede any land.

JTA: How do you feel about your grandson’s detention?

Kahane: It’s not fair. The harsh terms of his imprisonment, first of all, don’t match the rules for treatment of prisoners in administrative detention. A prisoner in administrative detention has not been accused of any crime, so he can’t be treated like a criminal. The rules are he can wear his own clothing and have better treatment than an ordinary prisoner. Meir has been kept from visitors and on and off kept from telephone calls.

When did you last speak to him? How is he doing?

A month ago. He never wants to sound bad when he speaks to me. He’s always upbeat. But now that he’s started a hunger strike it’s even worse, because a prisoner on a hunger strike, they take all his privileges. He gets a telephone call a day to his lawyer.

Do you feel your grandson is following in your husband’s footsteps?

The ideas I hear he has are not Meir [Kahane]’s ideas. Meir [Kahane] always wrote to his followers: “Don’t do anything illegal. They’ll find you. You’ll sit in prison.”

But your husband also spent time in prison after conspiring to bomb Soviet offices in New York.

The Russian demonstration – the point was to get public attention to the plight of the Russian Jews by doing things that were against the law, disturbing the peace in minor ways. He was against his followers doing anything that might end them up in prison.

How do you view the so-called Hilltop Youth extremists who look up to your husband and have carried out acts of violence against Palestinian people and property?

That’s really stupid. It’s such a childish thing done by children. It’s childish of the government to even consider it anything but childish. There are hotheads within the country that have nothing to do with the ideology of Rav Kahane, or any ideology. They’re just seeking revenge. Meir was all for the possible eventuality that Israel should be a Jewish state and a Torah state, but as far as how we implement it … there’s a difference here of maturity. A lot of these kids feel it’s unjust, what the Arabs have been doing here. Of course I feel sympathy for them. Today this friend was killed, this friend’s father was killed, sister was killed. Tomorrow they don’t know who will be killed. How can you live like that?

Would you call the arson at Duma childish? Three people have died.

It’s 99 percent certain a Jew did not do it. The graffiti that was left is not handwriting. It’s in the middle of the village. What stranger would go into the middle of the village, with the dogs barking? It’s just not a thing a Jewish boy would do. And take into context that there was a feud going on between two families [in Duma]. Nothing Meir [Ettinger] ever wrote could be construed as supporting that.

Do you feel your grandson has been imprisoned without cause?

I think he was a convenient scapegoat because he’s the grandson of Meir Kahane. What really bothers me is the way the Shabak [Israel’s Shin Bet intelligence agency] leaked things about him that were outright lies or innuendo, and the leftist media picked it up and made it a scandal, and made him No. 1.

You’ve said you’re writing Rabbi Kahane’s biography to explain what he thought and stood for. What would your husband, who was killed in New York in 1990, say about Israel today?

There are certain things he wrote that were prophetic. He wrote that now is the time to get the Arabs out of Israel. They’re growing and we’ll have terrific problems from them. They will gain more strength and want more strength. He [Kahane] adjusted what he wrote to what was happening at the time. He wrote about the bad public relations job Israel is doing. He did speak on campus, and said things official spokespeople didn’t say.

The left is contributing to the bad name of Israel from early days. We’re also dealing with American Jews who are anti-Israel. I’m talking about the American Jews on campus who are anti-Semitic, who demonstrate against Israel. It’s not a small subset at all. It’s the Jewish newspapers, the Anglo-Jewish press. It’s pro-Palestinian.

What were Kahane’s values?

Jews have to help Jews, and not help people who are not helping Jews.

If Jews don’t know what they’re fighting for, they won’t fight. They won’t protect themselves. They’ll keep giving more to the Arabs. If peace isn’t possible, it’s a pity. But it doesn’t mean you give up the Jewish state.

(This interview has been condensed.)