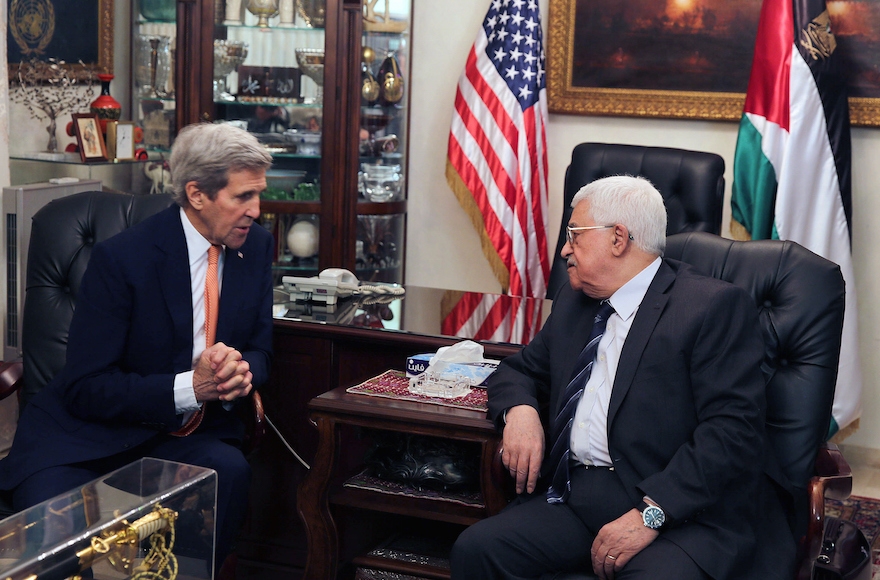 (JTA) — Palestinian Authority President Mahmoud Abbas at a meeting with U.S. Secretary of State John Kerry in Jordan called on the United States to ensure the viability of the two-state solution.

The two leaders met Sunday in Amman, according to Palestinian reports.

Kerry was in Amman to meet with Jordanian Foreign Minister Nasser Judeh ahead of a meeting scheduled for later this month between King Abdullah and President Barack Obama in Washington. Kerry was not scheduled to travel to Israel or receive Israeli officials in Amman during his visit to Jordan, according to Israeli media reports.

During Sunday’s meeting, Abbas updated Kerry on the latest initiatives for a Palestinian unity government with Hamas and also called on the United Nations Security Council to condemn building in Israeli settlements, the official Palestinian Wafa news service reported.

Kerry and Abbas discussed ongoing tensions between Israelis and Palestinians in the West Bank and Jerusalem, as well as at the Temple Mount, State Department spokesman John Kirby said in a statement.Kerry “continued to urge calm and a decrease in violence, incitement and inflammatory rhetoric,” Kirby said. “He stressed the commitment of the United States to seeking a sustainable two-state solution and to working with all parties to that end. He also reiterated our policy on the illegitimacy of Israeli settlements.”

Abbas reportedly called on Kerry to pressure Israel to release Palestinian prisoner Muhammad al-Qiq, who has been on a hunger strike for 88 days to protest his administrative detention, as well as to return to their families the remains of alleged Palestinian attackers who have been shot and killed by Israeli troops and civilians during the latest round of violence against Israelis, Wafa said.