Indie bands and intellectuals at the ‘Woodstock of Jewish identity’ 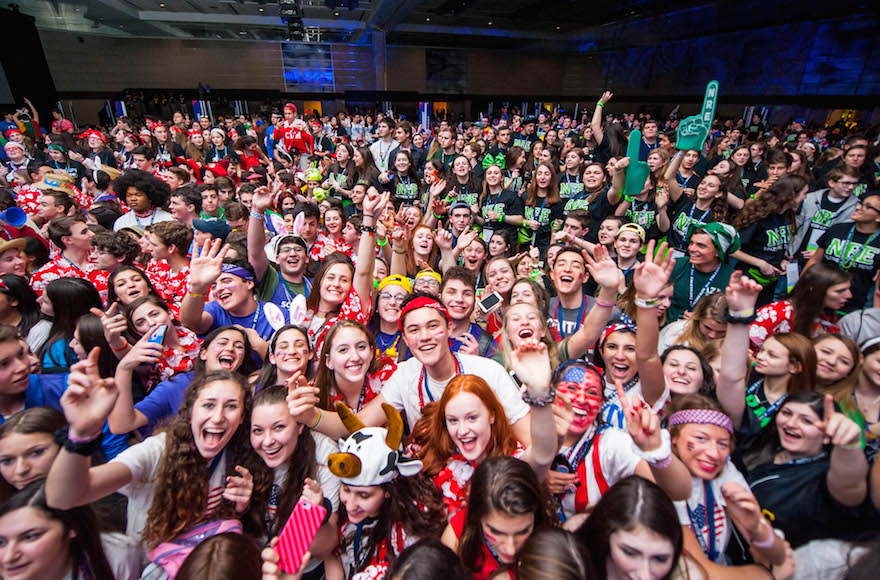 Back in high school, I happily attended Jewish day school, spent summers at a Jewish camp, went on a group Israel trip and took part in a few youth group events. So it was a strange feeling I experienced over President’s Day weekend when I found myself looking back and suddenly feeling Jewishly deprived.

Sounds corny. But that was my gut reaction standing among 2,500 spirited teens from around the world at the energized opening ceremonies of this year’s BBYO International Convention.

IC, as it is known in BBYO world, has been around for decades. But in the past few years it has evolved into a high-energy event rivaling any conference or convention on the Jewish calendar.

Teen attendance has nearly tripled since 2012 — this year’s total attendance was about 4,000, including adults. Depending on how you count, that’s bigger than the annual General Assembly of the Jewish Federations of North America. Yes, AIPAC’s annual policy conference wins on the numbers, drawing more than 15,000 — including more than half of Congress — and it features a first-rate program packed with big-time plenary speakers and dozens of interesting panel discussions. But the AIPAC event’s focus is relatively narrow compared to the annual BBYO gathering (and slightly less fun).

READ: Op-Ed: The Force is strong with Conservative movement teens

Throughout, there was also live music, including electronic from the dance music group Cash Cash, the alternative rock band The Mowgli’s and hip hop/pop singer-songwriter Jason Derulo.

Shabbat included 23 pluralistic teen-led services, a Friday night meal billed by organizers as breaking the Guinness World Record for largest Shabbat dinner ever, and multiple learning sessions (including a talk moderated by this journalist between Matt Nosanchuk, the Obama administration’s Jewish liaison, and Noam Neusner, who served in the same capacity during the administration of President George W. Bush). There was even a New York Times columnist on hand to sum it all up.

“What you see here is like a Woodstock of Jewish identity,” David Brooks of the Times told a group of philanthropists who had gathered for their summit on the eve of IC to discuss the need for more funding for teen programs. “You see all these people coming together and their identity as Jews is inflamed by the presence of each other.”

Just as Woodstock was a cultural moment that reverberated for decades, it is not hard to imagine a few more epic ICs could create and inspire a cohort of thousands of Jewish activists-for-life capable of maintaining and reinvigorating Jewish communities and institutions for years to come. For some philanthropists, that alone might justify the $1.1 million funders are putting up to keep the cost to each teen under $1,000.

But for BBYO’s CEO, Matt Grossman, the supersized IC is about the here and now. The growing numbers at IC are partially the product of recent BBYO membership growth (17 percent over past five years), Grossman said during an interview. More importantly, he added, the convention is an important tool for inspiring teens to connect their friends to BBYO.

READ: Op-Ed: How to build a holy Tabernacle for teens today

“Nothing is more powerful than an older teen putting their arm around a younger teen and inviting them into the movement,” Grossman said. “Teen leadership and, specifically, peer-to-peer recruitment is key to our growth.”

And they’re going to need a ton of it.

According to an analysis of the 2013 Pew survey of American Jews done by Rosov Consulting, there are about 446,000 Jewish teens with some claim to being Jewish. Filter out 19-year-olds, the Orthodox and those most disconnected from Jewish life, and you’re looking at a target audience of about 210,000. According to Grossman, BBYO is undergoing a capacity-building study to determine “the resources and strategies needed to capture even greater market share.”

Currently the organization has about 19,000 paid members, and about 32,000 take part in a BBYO event each year. The organization’s database of reachable teens is about 80,000.

Tripling the number of paid members would get about a quarter of the 210,000 target audience. If we’re simply talking participation in an event, BBYO would still need to more than double its current number of annual touches to reach all those teens.

BBYO’s annual budget is about $28 million — a 33 percent increase over the past five years. The organization boasts an impressive group of lead funders — including the Charles and Lynn Schusterman Family Foundation, the Jim Joseph Foundation, the David and Inez Myers Foundation, and the Marcus Foundation — though it says its fastest growing source of revenue is smaller gifts from parents and alumni ($2.35 million in 2015).

The organization employs 100 paid full-time and 30 part-time staff. About 30 staffers in total are based at the national headquarters in Washington, D.C., with the remaining employees working with teens in the field.

“BBYO is enabling tens of thousands of Jewish teens to create and participate in fun, joyous and meaningful experiences that allow them to develop as leaders, serve others and connect with Israel and to a larger purpose, all within a Jewish wrapping,” said Stacy Schusterman, co-chair of the Schusterman Foundation. “I have seen firsthand, both as a parent and a funder, the enduring power and importance of this work, as did all of those who participated in BBYO IC and the Teen Summit. I hope more people will invest in the currently underfunded Jewish teen space.”

The stakes are about more than BBYO — most of those 210,000 teens aren’t involved in any Jewish activities.

Grossman isn’t prepared yet to say how much it would cost to hit sky-high numbers. But he believes one thing BBYO already has is a successful formula for engaging the bulk of today’s Jewish teens.

It starts with a bedrock first principle of being a teen-led movement rather than advancing a particular ideology — a huge advantage at a time when Jews of all ages are steering clear of institutions and synagogue movements and formulating their own definitions of Jewish identity.

The IC program, say BBYO’s staffers and several members of the youth group, was the product of planning by the teens themselves and hence a reflection of their eclectic interests and passions. Judging from the speaker lineup and the crowd response, the average BBYOer is unapologetically excited about being Jewish, connecting with other Jews and supportive of Israel — and equally dedicated to working together to advance more universal causes, from minority and LGBQT rights to the plight of international refugees.

Which creates the seemingly incongruous sight (at least in today’s political climate) of a raucous convention hall crowd cheering a founding Israeli Air Force pilot’s talk of shooting down Arab fighter planes and less than an hour later applauding just as strongly for the NAACP leader’s calls for Jewish teens to take advantage of their privilege to join with African-American activists in today’s battles for racial justice.

While a willingness to let today’s teens point the way forward is critical to BBYO’s success, so is the organization’s simultaneous ability to foster enthusiasm for its 90-year history and leverage an alumni base of 400,000.

The result is a potent combination of historical gravitas and a wide-open future.

How high a future is the question.