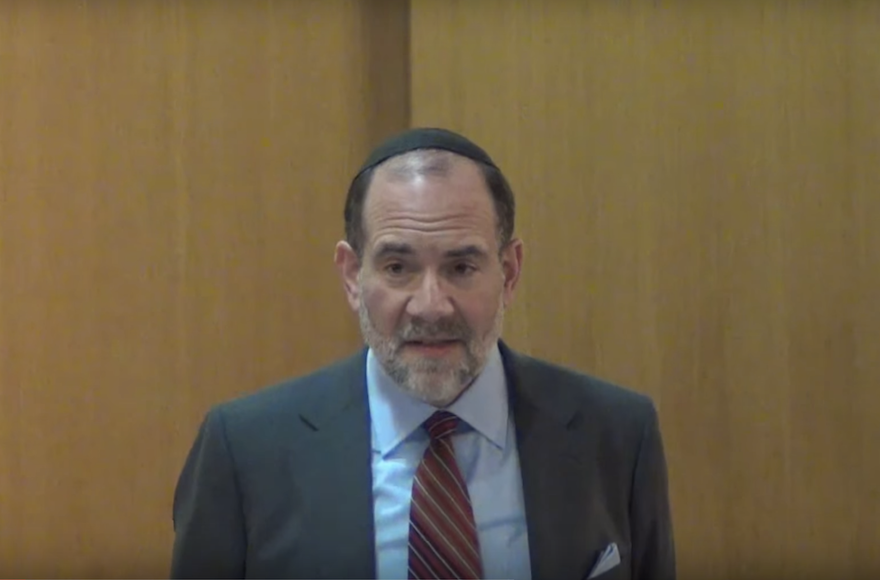 (JTA) — Rabbi Jonathan Rosenblatt, the New York spiritual leader who has been under fire for having sauna chats with boys in his congregation, reportedly has resigned from his Bronx synagogue.

Rosenblatt told the Riverdale Jewish Center on Wednesday that he will step down as senior rabbi, the Times of Israel reported Thursday. He has served in the post since 1985.

The decision was announced in an email letter sent to the synagogue membership on Wednesday evening signed by the synagogue’s president, Samson Fine, the Israel-based news website reported.

“Rabbi Rosenblatt has today informed RJC’s leadership that he intends to step aside from the Senior Rabbinate of the RJC,” the email read, according to the Times of Israel. “The Shul’s Board of Trustees was informed at this evening Board meeting and we anticipate discussing transition details the Board in the next two weeks.”

Rosenblatt playing racquetball and visiting the showers and sauna with boys and young men from the congregation garnered headlines after an expose in The New York Times last May. The article reported that some congregants and former congregants of the modern Orthodox synagogue discussed the trips to the sauna, during which the rabbi “engaged the boys in searching conversations about their lives, problems and faith.”

No one cited in the story accused Rosenblatt of sexual touching, but several expressed their discomfort with the practice and described the behavior as deeply inappropriate for a rabbi and mentor. At various times, Rosenblatt was told by rabbinic bodies or his congregation’s board to limit such activity.

The synagogue determined early last June that no misconduct took place during the sauna sessions, and that Rosenblatt adhered to established guidelines in engaging with the boys.

Rosenblatt apologized in a letter to the congregation for inappropriate behavior and denied any criminal wrongdoing.

Following the Times story, the RJC’s board of directors voted 34-8 to seek a financial settlement to get Rosenblatt to resign his pulpit. But Rosenblatt vowed to stay on, saying that removing him would be a “disproportionate” response. Hundreds of congregants signed a petition backing the rabbi, while far fewer signed a competing petition calling on Rosenblatt to resign.

Rosenblatt’s determination to stay was bolstered by the warm reception he received after rending a dramatic public apology in front of hundreds of congregants at a synagogue gathering in late June.

Rosenblatt, a Baltimore native, studied in Israel at Yeshivat Har Etzion and was ordained by the Rabbi Isaac Elchanan Theological Seminary of Yeshiva University in 1982.