(JTA) — In response to an article revealing that an Oberlin College professor made numerous postings about Jews and Israel to Facebook, the liberal arts college’s president said Oberlin “respects the right of its faculty, students, staff and alumni to express their personal views.”

Marvin Krislov’s statement came after The Tower on Thursday published an article about Joy Karega, an assistant professor of rhetoric and composition at the elite Ohio institution.

Karega, who took down her Facebook posts and Twitter account after the article’s publication, had made comments accusing Israel and “Rothschild-led bankers” of responsibility for downing a Malaysian airliner over Ukraine in 2014. She also posted a graphic of Jacob Rothschild, a member of the prominent Jewish banking family, with a caption reading: “We own your news. The media. Your oil. And your government.”

Screenshots of many of her posts were published originally on The Tower. 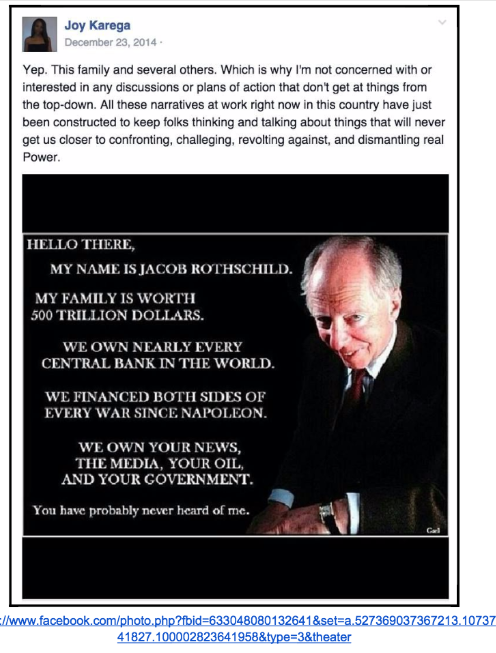 A screen shot of a post Oberlin professor Joy Karega put on her Facebook page. The post, along with most of her other public posts, were taken down this week. (Facebook via The Tower)

In a statement posted on Oberlin’s alumni Facebook page on Thursday, Krislov, who is Jewish, added, “The statements posted on social media by Dr. Joy Karega, assistant professor of rhetoric and composition, are hers alone and do not represent the views of Oberlin College.”

Alan Dershowitz, an emeritus professor of law at Harvard University, criticized Krislov’s response, telling The Tower: “If Karega had expressed comparably bigoted views about Blacks, Muslims or gays, the President of Oberlin would not have posted the boilerplate he posted. He would have condemned those views, even if he defended her right to express them.”

In one post, Karega accused “the same people behind the massacre in Gaza” of shooting down the Malaysian airliner over Ukraine. She continued: “With this false flag, the Rothschild-led banksters, exposed and hated and out of economic options to stave off the coming global deflationary depression, are implementing the World War III option.”

Karega’s social media posts drew attention after she was listed as co-sponsor of an event at Oberlin scheduled for March 2 in which Robin Kelley, a history professor at UCLA, is due to deliver a lecture titled “Fighting Apartheid Since 1948: Key Moments in Palestinian and Black Solidarity.” 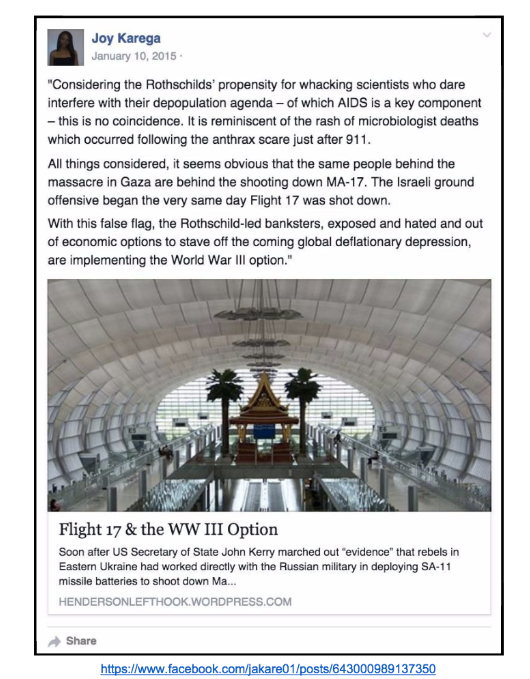 Karega declined to respond to The Tower, but posted on Facebook Friday: “Robin Kelley IS still coming to Oberlin next week, despite efforts by some to prevent it. Trust, when I come up out of my Unbothered state of being, I’ll have a lot to say (analysis, no doubt) about the kinds of intimidation and silencing tactics that are rhetorically enacted in digital spaces, through email, through telephone communication, and propagandized editorial articles, masquerading as ‘journalism,’ and how common it is for Black women, who are early in their career on the tenure track as part of the professoriate, to be prime targets for these kinds of activities and practices.”

Oberlin has drawn attention in recent months for what some alumni claim is a culture of tolerance for anti-Semitism. More than 250 alumni have signed an open letter to Krislov voicing concern about this and mentioning several incidents at the school, including the expulsion of the Kosher Halal co-op from the Oberlin Student Cooperation Association and a protest against Israel on Rosh Hashanah that Jewish students had to pass through on their way to holiday services.

Some Jewish student leaders criticized that letter in an Op-Ed published in the Cleveland Jewish News this week, saying the letter “lack(ed) a nuanced understanding of the complex dynamics on Oberlin’s campus” and expressing concern that “there was virtually no student involvement or input on the letter’s contents.”

The school also garnered headlines in December when African-American student activists issued a 14-page list of demands to Krislov, including that the school divest from companies doing business with Israel. The document also demanded that Krislov guarantee tenure “upon review” for Karega and seven other African-American tenure-track faculty members.