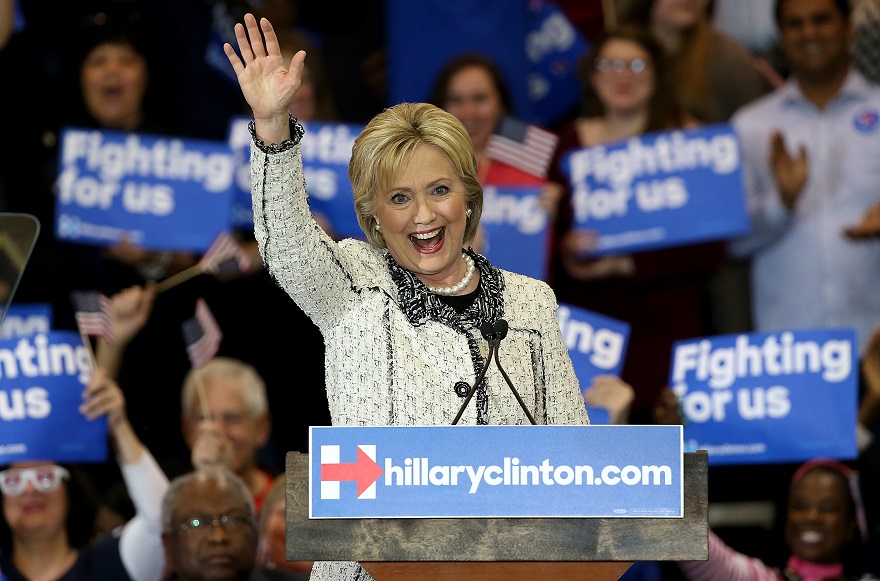 Favorability among blacks is likely to favor Clinton as the candidates head into March 1 primaries, known as Super Tuesday, when 11 states run contests for Democrats. Eight of the states are in the South, where blacks are likely once again to be a substantial portion of the turnout. Sanders has failed to make the inroads among minorities necessary to overtake Clinton.

“Tomorrow, this campaign goes national,” Clinton said in her victory speech in Columbia on Saturday.

Victories on Tuesday may propel back to inevitability the candidacy of Clinton, a former secretary of state thought to be the prohibitive front-runner but who has faced a surprisingly strong challenge from Sanders, the first Jewish candidate to win a primary. Sanders was thought to have dented Clinton’s chances when he won decisively earlier this month in New Hampshire and lost by a razor-thin margin in Iowa. Clinton defeated Sanders in the Nevada caucuses.

Republicans vote in 13 states on Tuesday, and the four challengers to Donald Trump, the real estate billionaire who is leading in the polls and has won three of the four early states so far, may face pressures to drop out if they cannot steal some of Trump’s thunder. Sen. Ted. Cruz of Texas has suggested he will leave the race if he fails to win his home state of Texas, which is in contention on the day.

Trump, meanwhile, appears to be sensitive to the barrage of attacks his rivals have unleashed on him in recent days as it appears likelier he will win the nomination. In the last debate before the Tuesday contest, on Feb. 25 in Houston, all four rivals lambasted Trump for saying he would be neutral in brokering Israeli-Palestinian peace.

Trump on Saturday posted on Twitter a photo from 2004, when he was grand marshal in the Salute to Israel Parade in New York.