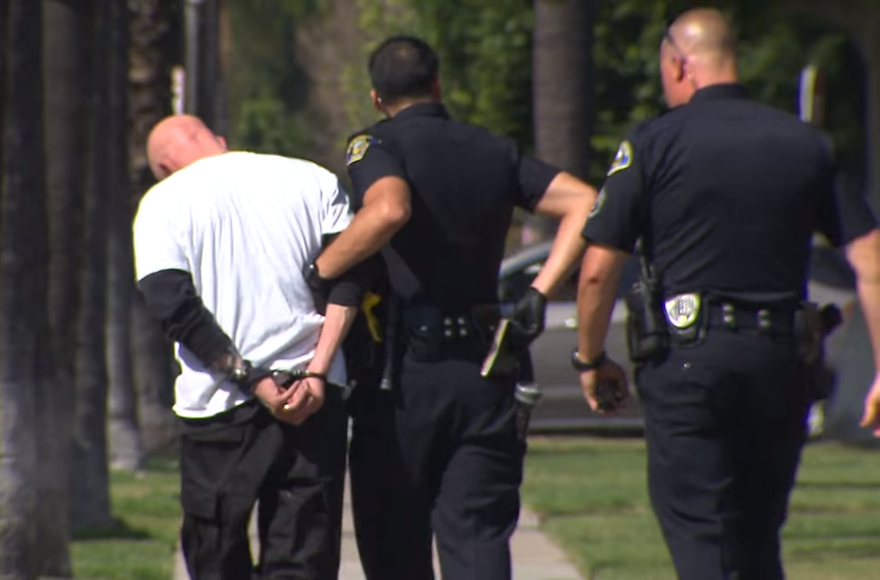 (JTA) — A Jewish attorney and scholar who tracks extremist groups is being credited with saving three Ku Klux Klan members at an anti-immigration rally in Southern California that turned violent.

Brian Levin, director of the Center for the Study of Hate and Extremism at California State University, San Bernardino, was filming Saturday’s rally in Anaheim when he jumped in to defend the white supremacists who were being attacked by counterprotesters with wooden posts.

“[The counterprotesters] were so angry, they would have torn these folks limb from limb,” Levin told The Associated Press. “I was afraid for their lives.”

The counterprotesters, according to police, showed up early at the rally with “the intent of perpetrating violence,” according to Newsweek. Seven attacked KKK members with wooden posts, and the KKK members retaliated by stabbing three. No serious injuries were reported.

In a video he recorded of the event, Levin asked the Klansmen he protected, “How do you feel that a Jewish person helped save your life today?”

According to his biography on the Center for the Study of Hate and Extremism website, Levin’s background includes serving as associate director of legal affairs of the Southern Poverty Law Center’s Klanwatch/Militia Task Force in Montgomery, Alabama, and as a New York City police officer in the Harlem and Washington Heights neighborhoods of Manhattan “during the crack wars of the 1980s.” He is a court-certified expert on extremism in the United States.

Anaheim, once 95 percent white, elected four Klan members to the City Council in 1924, according to the AP, but they were ousted in a recall election.

“We’re a far cry from those terrible times and the Klan is really an anachronism,” Levin said. “Anaheim is now a diverse community that is in many ways an amusement and sports capital of California. This is just an example of how a small group of people can tarnish the name of a community.”

Five KKK members who were arrested after Saturday’s brawl were released Monday after the police determined they had acted in self-defense. Seven of the counterprotesters remain in custody.

“Regardless of an individual or group’s beliefs or ideologies,” the police statement said, “they are entitled to live without the fear of physical violence and have the right, under the law, to defend themselves when attacked.”

“The totality of the evidence, including videos, still pictures and interviews, paints a pretty clear picture as to who the aggressors were,” Anaheim Police Sgt. Daron Wyatt told the Los Angeles Times. “It does appear to be self-defense and defense of another.”