Super Tuesday 2016: How each candidate hopes to trump Trump 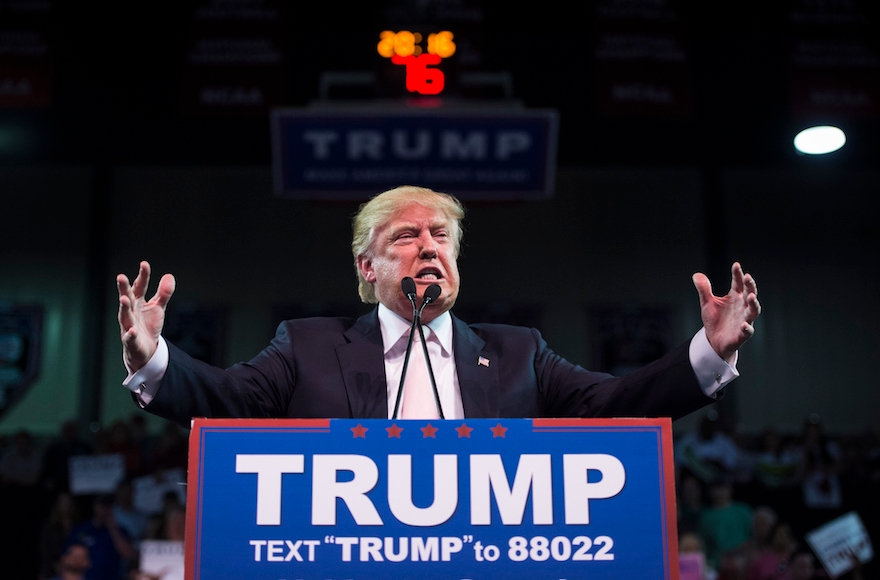 WASHINGTON (JTA) – Heading into Super Tuesday, the most significant political act may not have been a rabble rousing speech or a surprise endorsement, but a tweet.

On the eve of the biggest day in the presidential primaries for both parties– with 11 states apiece and about a quarter of all delegates up for grabs  — Hillary Rodham Clinton retweeted a blunt plea by her Democratic rival, Sen. Bernie Sanders, I-Vt., to stop Donald Trump, who he called a “hatemonger.”

America’s first black president cannot and will not be succeeded by a hatemonger who refuses to condemn the KKK.

The extraordinary unity of opposition to Trump, within and across party lines, was galvanized by the real estate billionaire’s failure to unequivocally disavow the endorsement of former Ku Klux Klan leader David Duke. Yet, Trump remains the GOP front-runner, and Super Tuesday is largely about who will emerge to challenge him.

Here’s what each candidate hope his or her campaign to have achieved by Wednesday.

Trump said he plans on sweeping the Super Tuesday contests, but a rout may not be in his best interests. If he cedes Texas to Cruz and if Ohio Gov. John Kasich performs well — he hopes to come in second behind Trump in Massachusetts — Trump keeps them in the race and keeps his opponents from uniting behind a single anti-Trump candidate. Rubio, who has been garnering most of the GOP establishment endorsements, would like to be the last man standing, but if he is still feeling the elbows of Cruz and Kasich by mid-March, Trump’s ascension looks inevitable.

Cruz faces the most immediate challenge. Texas is one of the states running a primary on Tuesday, and Cruz has suggested he would drop out if Trump bests him in the state he represents as senator. Cruz started strong by winning in Iowa, but has not been able to pull off even second place in the other three February nominating states. He pulled ahead of Trump in Texas polling in recent days after running neck and neck for weeks.

Rubio has shown promise in the four February contests by coming in second behind Trump in Nevada and South Carolina, and a strong third in Iowa, where Trump came in second and Cruz won. (Rubio floundered in New Hampshire.) But he is under pressure to show he can win a state, and has been campaigning hard in the South, where he has the backing of South Carolina’s popular governor, Nikki Haley. Eight of the 13 states in GOP primaries Tuesday are in the South.

A Southern win could boost Rubio’s numbers in Florida, which goes to the polls on March 15, and where Trump is working hard to kill Rubio’s chances once and for all. Polls now show Trump leading Rubio in Florida by double digits.

Kasich is not counting on any wins on Tuesday, but hopes to turn in respectable enough performances to last through March 8, when Michigan goes to the polls, and March 15, when Ohio votes. He is counting on wins in both states. In Michigan, Kasich is running fourth in polls, and in Ohio, his home state, second. Trump is leading in both states.

Ben Carson, the former neurosurgeon, trails last among the five Republicans most polls, but is sticking out the race for now.

Sanders’ Vermont is among the states going to the Democratic polls on Tuesday, and it may be the only state where he pulls out a win. He has campaigned hard in recent days in the states where he appears to have the best chance of an upset, and where he can appeal to the struggling whites who are most receptive to his messaging about income inequality: Massachusetts, Colorado, Oklahoma and Minnesota. Sanders’ best chance is in Oklahoma, where he is in a virtual dead heat with Clinton. If he takes the state, he could credibly claim a win in the South, where Clinton otherwise is dominating.

Clinton leads substantially throughout the South. A Clinton sweep of the eight southern states, where African-Americans and Latinos are major components of the Democratic vote, would help make her point that she is the better Democratic candidate to inspire minority voters in the general election.

Clinton also appears to be leading Sanders in Massachusetts; a loss in a neighboring state could wound Sanders, who became the first Jewish presidential candidate to win a primary last month when he won New Hampshire.