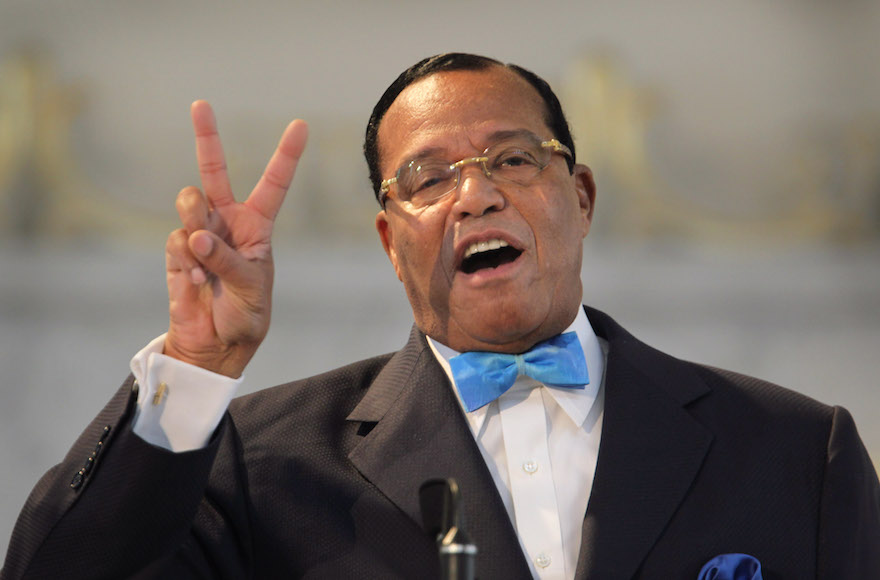 Louis Farrakhan, leader of the Nation of Islam, making a point while speaking at a press conference at Mosque Maryam in Chicago, Illinois, March 31, 2011. (Scott Olson/Getty Images)
Advertisement

(JTA) — Donald Trump won praise from Nation of Islam leader Louis Farrakhan for not taking Jewish money in his quest for the White House.

Farrakhan, who has made frequent anti-Semitic comments, lauded Trump during a sermon Sunday in Chicago, according to the Anti-Defamation League website the following day.

The praise from Farrakhan comes on the heels of a controversy in which the Republican presidential front-runner failed to immediately disavow the endorsement of David Duke, a former Ku Klux Klan leader.

According to the ADL, Farrakhan said the billionaire Trump is “the only mem­ber who has stood in front of Jew­ish com­mu­nity and said I don’t want your money. Anytime a man can say to those who con­trol the politics of Amer­ica, ‘I don’t want your money,’ that means you can’t con­trol me. And they can­not afford to give up con­trol of the pres­i­dents of the United States.”

Farrakhan, 82, stopped short of a full endorsement, however, stating: “Not that I’m for Mr. Trump, but I like what I’m look­ing at.”

The ADL said Farrakhan’s sermon also blamed Jews, whom he referred to as the “Synagogue of Satan,” for the Iraq War and 9/11 terror attacks.

Referring to former U.S. Deputy Secretary of Defense Paul Wolfowitz, Farrakhan said, “These are people sitting in the Pentagon, planning the destruction of Muslim nations.”

“Wolfowitz had 10 years now, to plan how they’re gonna clean out the Mid­dle East and take over those Mus­lim nations. They needed another Pearl Har­bor,” Farrakhan said, according to the ADL. “They needed some event that was cataclysmic, that would make the Amer­i­can peo­ple rise up, ready for war … they plot­ted a false flag oper­a­tion, and when a gov­ern­ment is so rot­ten that they will kill inno­cent peo­ple to accom­plish a polit­i­cal objec­tive, you are not deal­ing with a human …”

­Farrakhan continued, “George Bush, and those devils, Satans around him. They plot­ted 9/11. Ain’t no Mus­lim took con­trol of no plane.”

Blaming the Jews for 9/11 was nothing new for Farrakhan, who said in a 2015 sermon that “it is now becoming apparent that there were many Israelis and Zionist Jews in key roles in the 9/11 attacks.”