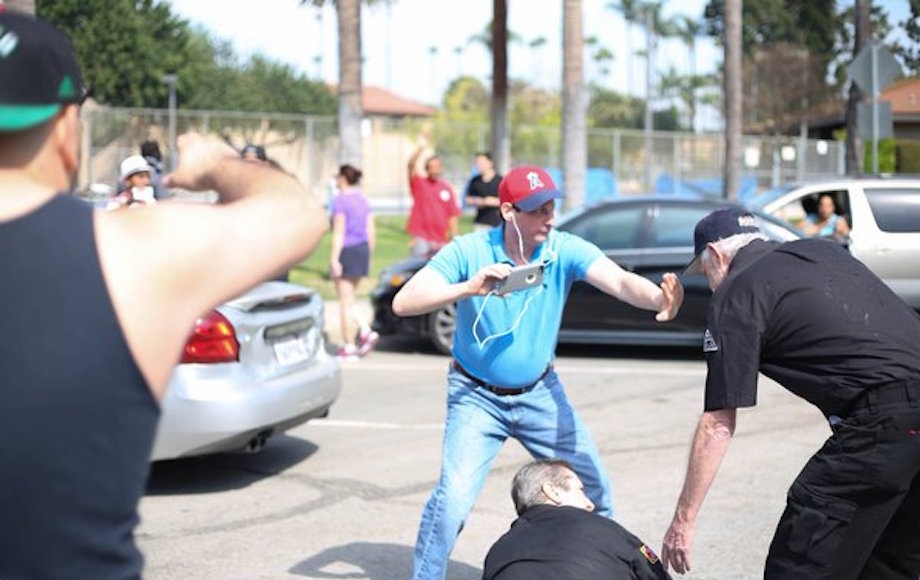 (JTA) – Is Brian Levin a hero? It depends who you ask.

For three long minutes on Saturday, Levin was all that stood between an angry, violent mob and some Ku Klux Klan demonstrators in Anaheim, California, in Levin’s retelling of the episode.

A former New York Police Department officer who is now director of the Center for the Study of Hate and Extremism at California State University, Levin was on hand to document the KKK rally, as he has many other extremist demonstrations over the years.

But he quickly found himself a part of the action when a violent melee greeted the arrival of the KKK members in their oversized SUV.

“There was a mob stomping on a Klansman who had fallen or was pushed to the ground,” Levin said in his breathless recollection of the confrontation, which made headlines around the country after three people were stabbed and 13 arrested.

“There were football player-sized people kicking him in the face and the abdomen. I crouched over him so he wouldn’t be kicked, and I said, ‘Do not hit this man.’”

When asked how he was able to hold off the assailants, who he said were wielding a wooden plank and a metal rod, Levin said he used the authoritative voice he honed during five years of service on the NYPD in the late 1980s.

“I don’t know if I would call it heroics,” Levin said.

Levin is no fan of the Klan, but this wasn’t the first time he has come to the aid of a white supremacist in distress, he said, recalling a similar incident in 1998 in Warren, Ohio.

After the cops arrived and order was restored, someone asked one of the KKK members how it felt to have his life saved by a Jewish guy.

“He said thank you,” Levin said.