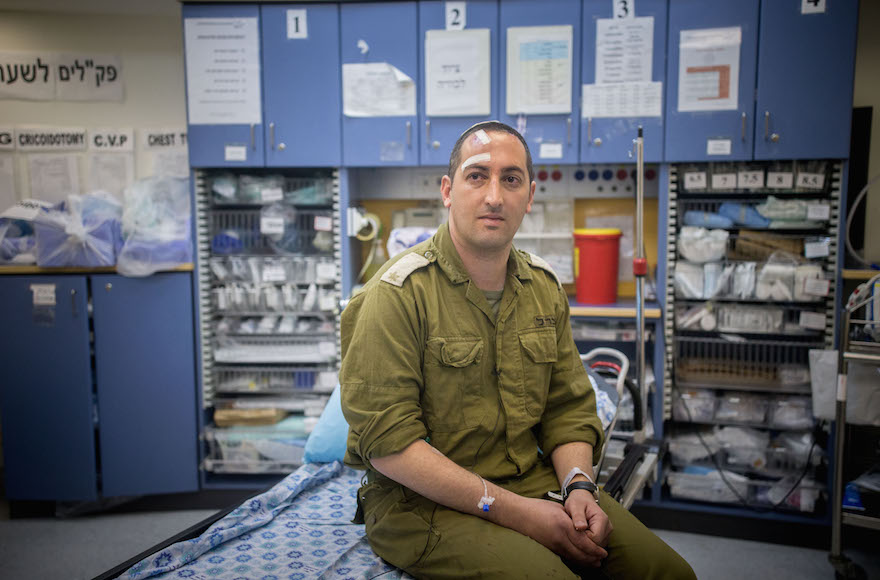 Roy Harel, a resident of the Jewish settlement of Eli, being treated at the Shaare Zedek Medical Center in Jerusalem, Israel, March 2, 2016. (Yonatan Sindel/Flash90)
Advertisement

(JTA) — Two Israeli soldiers were stabbed at the entrance to a West Bank settlement near Nablus.

The Wednesday evening stabbings, which caused minor injuries, were the second such attack in the central West Bank in a day, the Times of Israel reported.

The two alleged assailants at the Har Bracha settlement gate were captured by Israeli security forces after a brief manhunt, according to the Debka File. The attackers are believed to have stolen the victims’ guns before fleeing the scene, but appear to have abandoned them just outside the settlement, where the weapons were found.

Early Wednesday morning, two Palestinian teens stabbed Roi Harel, a father of five, as he was leaving his West Bank home for army reserve duty. The assailants attacked Harel with clubs and axes, then entered the premises, according to the Israel Defense Forces. Harel said he managed to shove his assailants out of his home in the Eli settlement before they could hurt his family.

He was treated at a Jerusalem hospital for cuts to his head.

Both alleged assailants, 17, were later shot dead by settlement guards after fleeing the scene.