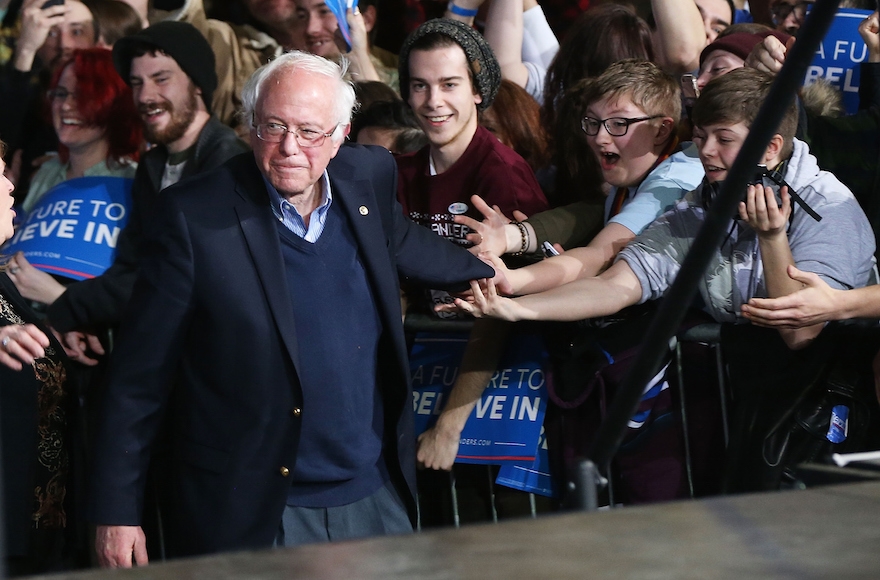 Hillary Rodham Clinton and Donald Trump both won decisively on Super Tuesday, but neither swept the 11 states at stake on the biggest day of the presidential primaries.

On the Republican side, Sen. Ted Cruz, R-Texas, won three states and Sen. Marco Rubio, R-Fla., won one, Minnesota, and performed better than expected in another, Virginia, where he came in second to Trump. Ohio Gov. John Kasich and Ben Carson, the retired neurosurgeon, have yet to win a single state in the GOP contests.

That means questions remain for both parties. Here are two with Jewish dimensions.

Is this the beginning of the end for Sanders?

It’s not just the number of states Clinton won on Tuesday that makes a Sanders path to the nomination more prohibitive, it’s the breadth of her wins. Gaps like her 56 percentage points to his 35 in Virginia, 59-33 in Tennessee and 66-29 in Georgia are daunting to say the least.

Clinton now commands more than a thousand of the 2,383 delegates needed for the nomination, while Sanders has 408.

At the Daily Beast, Michael Tomasky, a liberal columnist, advised Sanders to realize that it’s essentially over and that his rationale for staying in the race would be to influence Clinton rather than destroy her.

Sanders’ speech, in Burlington, Vermont, suggested that he may be receptive to that approach. He included a single, gentle, jab at Clinton about her claim that he thinks “too big” — training most of his fire on Republicans. Tellingly, he also looked poignantly back on the launch of his campaign rather than forward to victory, and seemed to embrace his candidacy as a vehicle for influencing the race as opposed to winning it.

“What I have said from day one in this campaign and I suspect many of you were down on the lake with me when we announced on that beautiful day, what I have said is that this campaign is not just about electing a president. It is about making a political revolution. What that revolution is about is bringing millions of millions of people into the political process. Working people who have been so disillusioned, they no longer vote. Young people who have never been involved,” he said.

Yet Sanders is already campaigning in Maine, which has 30 delegates, ahead of the March 6 caucuses, where he has a New England advantage. Clinton is slated to win the March 5 primary in Louisiana with 59 delegates, where she is leading by 40 points in polls.

Further down the line, Sanders has proven adept at winning the votes of younger voters, particularly university students, while Clinton is well ahead of him among minorities.

That leaves working class whites a possible battleground for Sanders. Clinton excelled with the constituency in 2008 when she lost to President Barack Obama, but Sanders’ hard focus on income inequality appealed to working Democrats in Nevada last month, allowing him to mount a serious challenge. Clinton won the state by five points.

Working class whites will be important in states with huge delegate counts like Michigan (March 8), where the candidates will debate on Sunday, as well as Florida, Illinois, Missouri, North Carolina, Ohio (all March 15), Arizona (March 22), Washington (March 26) and Wisconsin (April 5.)

According to aggregations of recent polls by RealClearPolitics, Clinton leads Sanders in Michigan, Florida, Illinois, North Carolina and Ohio. Only in Wisconsin are they in a dead heat.

Does the Jewish GOP establishment favor Cruz or Rubio?

They say familiarity breeds contempt. Both Cruz and Rubio are youthful sons of Cuban immigrants who have at times been propelled by the Tea Party.

Cruz made the case Tuesday night that it’s time for Rubio to clear out. “After tonight we have seen that our campaign is the only campaign that has beaten that can beat and that will beat Donald Trump,” he said in a Houston area rally, noting that his three wins brings to four his total victories in the nomination contest.

Rubio remains a favorite of pro-Israel conservatives. Witness the spin in the day-after column by Jennifer Rubin, the Washington Post columnist who is something of a bellwether for the pro-Israel subset among Republicans.

“The premise of Cruz’s speech was that he was the only candidate to have beaten Trump. One problem: Just a short while later, Sen. Marco Rubio (R-Fla.) won Minnesota. Moreover, Rubio has come in ahead of Cruz in not only Minnesota but in states in which neither won (Vermont, Virginia and Massachusetts, not to mention South Carolina and Nevada). Even in a state Cruz once banked on winning, Georgia, Rubio edged him out for second place. It sure seems like Rubio, especially with Cruz out of the race, would be the strongest candidate against Trump in states yet to come, including Florida, Michigan, Illinois, New Jersey (some now want Christie to resign, so he may not be the best Trump surrogate there) and other states outside the Deep South,” she wrote.

On the other hand, Cruz, who just weeks ago was lumped with Trump as the bane of the GOP establishment, is beginning to attract mainstream attention as the best chance to stop the real estate billionaire. That’s true too among the party’s most prominent pro-Israel contingent. Sen. Lindsey Graham, R-S.C., perhaps the senator closest to the pro-Israel community who once likened Cruz and Trump to different modes of violent death, now says he can stomach Cruz, if it means stopping Trump.

Cruz also posted a list of “Jewish leaders” who have endorsed him. These are routine for campaigns, and in this case, as in many others, the list includes folks whose “leadership” seems limited to their appearances on such lists. There are, however, some notable inclusions: Sarah Stern’s group, the Endowment for Middle East Truth, has been funded by casino magnate Sheldon Adelson, who reportedly is wavering between Cruz and Rubio. Ben Chouake is the president of one of the biggest pro-Israel PACs, NORPAC. And Michael and Barbara Ledeen have been deeply involved for decades in shaping Republican foreign policy.