Stephen Colbert sings with ‘Fiddler on the Roof’ Broadway cast 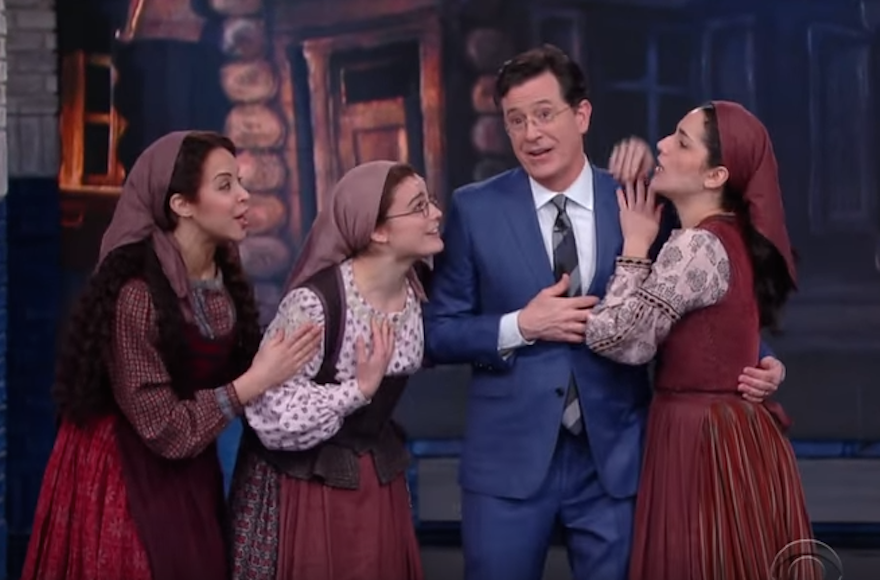 Stephen Colbert performing with "Fiddler on the Roof" cast members on "The Late Show" in New York, March 2, 2016. (Screenshot from YouTube)
Advertisement

(JTA) — Stephen Colbert sang songs from “Fiddler on the Roof” with members of the cast of the recent Broadway revival.

The “Late Show with Stephen Colbert” host sang “Matchmaker, Matchmaker” and “Tradition” in an opening segment of Tuesday night’s show.

Before the singing, Colbert explained in a comic aside that “Fiddler” is being shown at the Broadway Theater across from CBS’ Ed Sullivan Theater where the “Late Show” is filmed.

“People line up for both of our shows at the same time on 53rd Street,” he said. “Sometimes people get mixed up and they get in the wrong line.”

Colbert sang “Matchmaker, Matchmaker” with a few cast members. That was followed by Danny Burstein, who is starring as Tevye, and other cast members coming on stage for a performance of “Tradition.” Burstein even handed Colbert a fake beard and black hat to wear.