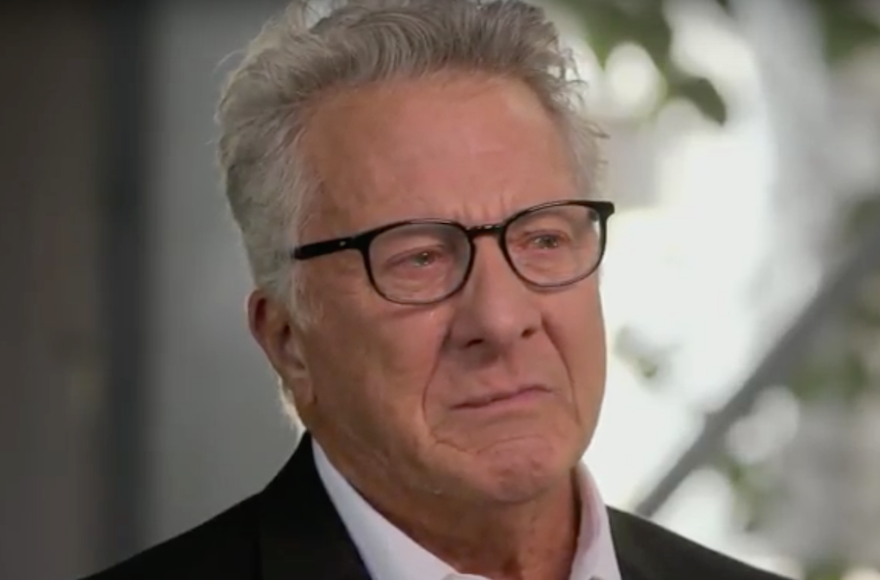 Dustin Hoffman on the PBS show “Finding Your Roots,” March 8, 2016. (Screenshot from YouTube)

Dustin Hoffman didn’t know the names of his paternal grandparents when he appeared Tuesday on the PBS show “Finding Your Roots With Henry Louis Gates.”

After learning of the tragedies in his family’s past and how his great-grandmother survived a Russian concentration camp to escape to the U.S., the Oscar-winning actor broke down in tears.

The story — told as usual by the Harvard historian Gates — began with Hoffman’s grandparents, Frank and Esther Hoffman, who emigrated to Chicago from Belaya Tserkov, a region of the then-Russian empire that is now in Ukraine. When Frank heard that Jews in the region were being killed in pogroms, he rushed back to find his parents, Sam and Libba Hoffman.

Sadly, he never found his parents — he was imprisoned and ultimately killed by the Bolshevik’s secret police force. Sam Hoffman was jailed and killed shortly thereafter.

Libba Hoffman, however, survived five years in a concentration camp. She then managed to escape to Argentina and find her way to the United States in 1930.

Gates showed Dustin Hoffman Libba Hoffman’s Ellis Island records, which showed that she had battled through daunting physical health issues — including the loss of one arm, poor vision and “senility” — to make it to the states at age 62.

“This is the hero of your family tree,” Gates said.

After hearing that, Hoffman couldn’t hold back his emotions.

“People ask me today, ‘What are you?’ I say, ‘I’m a Jew,’” Hoffman said, struggling through tears. “They all survived for me to be here.”

The star of “The Graduate” explained that his father kept this story from him for his entire life.

“I have so much trouble connecting to this because I come from a family where there were no relationships or need for them,” Hoffman said. “Maybe it could be as simple as My kids and my wife are not going to know this because this is terrible stuff, it’s not good stuff to report.”

Hoffman compared his father to Willy Loman, the main character in “Death of a Salesman” (a role Hoffman played in a 1985 film version of the play), and said they had a strained relationship.

He is one of dozens of celebrities to have appeared on the popular PBS show, which traces personal family histories using a mix of old-fashioned and DNA-based research.