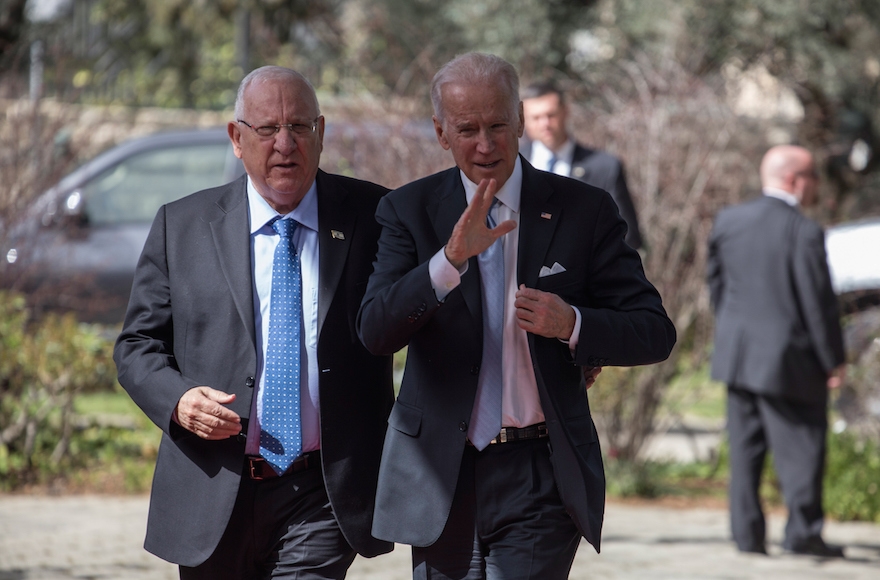 (JTA) — Vice President Joe Biden condemned the upsurge of terrorism in Israel, but said military force alone will not resolve it.

Following a Wednesday meeting with Israeli President Reuven Rivlin in Jerusalem, Biden, who is in Israel on a two-day trip, said, “The violence has to stop, period … it cannot and will not be done just by physical force,” according to the Times of Israel.

Biden met with Rivlin after a meeting with Prime Minister Benjamin Netanyahu that Israeli officials described as “friendly, cordial and warm.”

Topics addressed in the Netanyahu-Biden meeting included the Islamic State, Israel’s efforts to improve relations with Turkey, Palestinian incitement and security coordination between Israel and the Palestinian Authority, according to Netanyahu’s office.

Netanyahu also showed Biden several video clips of Palestinian incitement and noted that the Palestinian Authority’s Facebook page praised Tuesday’s stabbing attacks in Jaffa, in which an American tourist was killed and 10 Israelis were wounded.

Palestine TV, the PA’s official news station, described the perpetrator of that attack as a “martyr” and said his victims were “settlers,” according to a translation by the Middle East Media Research Institute.

Biden arrived in Israel on Tuesday, shortly before the Jaffa terror attack.

After the meeting with Rivlin, Biden, who is traveling with his wife and grandchildren, visited the Church of the Holy Sepulchre in Jerusalem’s Old City under heavy security. The church is built at the site believed to be where Jesus was crucified and buried.