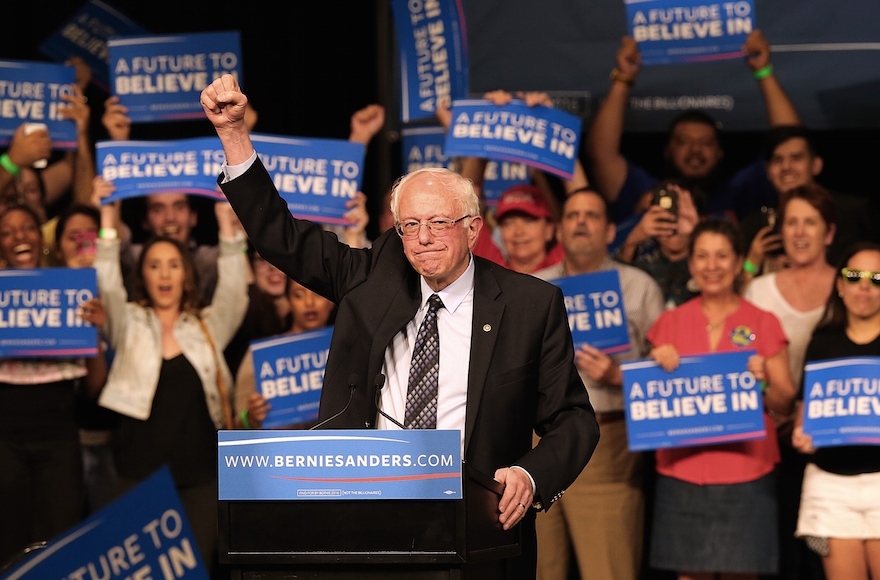 WASHINGTON (JTA) — Bernie Sanders won Michigan’s Democratic primary, an upset that gave new life to his candidacy and edged him closer to being the first Jewish major party nominee.

Hillary Clinton, the former secretary of state, trailed the Independent senator from Vermont by 2 percentage points in Michigan’s primary on Tuesday, 48 percent to his 50 percent, in a race polls had predicted she would win by double digits.

It was Sanders’ first contest in a large state and his first in the Midwest, an area critical to his ambitions of persuading Americans that he is best positioned to redress income inequality. It sets him up to challenge Clinton in neighboring Ohio on March 15, another major state Clinton was until Tuesday expected to handily win.

“The political revolution that we were talking about is strong in every part of the country and frankly we believe that our strongest areas are yet to happen,” Sanders said at a press conference in Florida, another state running a primary on March 15.

Clinton remains the front-runner, leading Sanders in state delegates by more than 200, and with the vast majority of “superdelegates,” or party officials, pledged to her. She trounced Sanders on Tuesday in Mississippi. She also leads in states won, 12 to Sanders’ nine.

But Sanders defied expectations in Michigan, drawing equal with Clinton among younger blacks, according to CNN. Clinton was believed to have a lock on minorities.

Ohio Gov. John Kasich, who had hoped for a surge in Michigan ahead of the Ohio vote next week, which he must win to stay in the race, came in third in Michigan, but at 24 percent, just a percentage point behind Cruz’s 25 percent.

Kasich got single digits in Mississippi and Idaho, 9 percent and 7 percent respectively.

Sen. Marco Rubio, R-Fla., who is sticking it out at least until next week when his home state, Florida, votes, scored third in Idaho, with 18 percent of the vote, but wallowed in single digits in the other states: 9 percent in Michigan and 5 percent in Mississippi.

Trump has so far won 14 nomination contests, against Cruz’s seven and Rubio’s two. Kasich has not won any yet.

Republicans were also voting in Hawaii on Tuesday